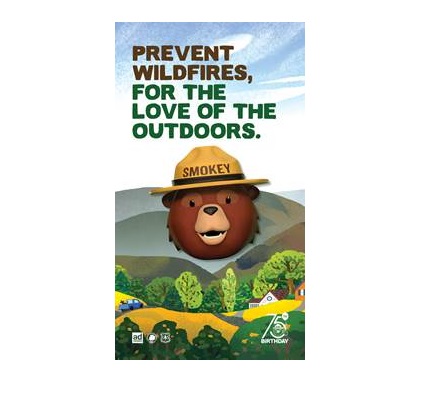 As America's favorite bear and cultural icon, Smokey Bear, celebrates his 75th birthday, it begs the question: How has he stayed relevant all these years? The answer starts by understanding how the Ad Council's famous ambassador of fire safety came to be.

In 1944, posters appeared across America featuring a black bear — sporting jeans and a ranger hat — pouring a pail of water upon an unattended campfire. Each was emblazoned with a memorable tagline: "Smokey says… Care will prevent 9 out of 10 forest fires!" This endearing figure would go on to inspire vigilance and fire safety in generations of campers and nature lovers and continues to remain prevalent to this day as the longest-running PSA advertising campaign in U.S. history. 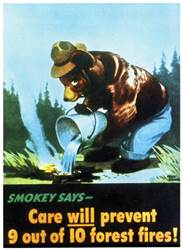 During the tail end of World War II, just after the tragedy of Pearl Harbor, Japanese submarines blew up an oil field off the coast of California — one that was located precariously close to Los Padres National Forest. The fear of additional attacks causing irreparable damage and loss of life, and the fact that most able-bodied men were still abroad fighting the war, made it clear that the responsibility fell on local communities to keep forests and wildlife safe from human-made wildfires. Those realities led to a clarion call to unite locals around the idea of forest fire prevention. So, the Forest Service teamed up with the Association of State Foresters and the Ad Council (then known as the War Advertising Council) to create the Cooperative Forest Fire Prevention (CFFP).

Though the public service advertising (PSA) posters initially created by the CFFP featured more politically charged themes (with taglines such as "Forest Fires Aid the Enemy" and "Our Carelessness, Their Secret Weapon"), it was only a matter of time before their collaborative efforts yielded a softer approach that featured wildlife. In fact, Smokey Bear wasn't the first critter to grace this ad campaign; that honor was actually held by a handful of more cuddly characters from Disney's Bambi. Since the famous icons were only loaned to the campaign for a short period of time, the CFFP soon needed to come up with their own mascot. They decided that they needed a mascot — one that embodied the power and majesty of the wilderness, but also appeared friendly. A bear was a natural fit and thus Smokey Bear came to be.

Smokey Bear's wildfire prevention campaign — with its enduring message of "Only you can prevent wildfires" — has had a dramatic impact since its introduction in 1944. This progress continues today, with an approximate 14 percent reduction in the average number of human-caused wildfires from 2011–2018, compared to the previous 10 years.

Over the years, this ursine icon has been featured in everything from print ads to out-of-home campaigns to TV commercials, and still makes appearances in classrooms across America to continue to spread his message of keeping forests safe from human-created wildfires.

Most recently, in honor of Smokey's 75th birthday, the Ad Council released a new PSA, featuring an animated emoji voiced by Betty White. Other celebrities, such as Stephen Colbert, Jeff Foxworthy, and Al Roker have also lent their voices to the campaign, backing Smokey's famous message.

Despite his age, Smokey Bear continues to maintain relevance in the modern world of advertising and is considered a pop culture icon. He'll even be making his return for the first time in decades to the Macy's Thanksgiving Day Parade this year, where generations of campers and nature lovers can see him floating above New York City.

This wildfire prevention icon has most assuredly aged well, as the outcome of the longest advertising campaign in the history of the United States speaks for itself. Overall, the campaign's messages have yielded more than $1.6 billion of donated media support, the Ad Council states. The PSAs have led 85 percent of outdoor recreationalists to believe that they are capable of preventing devastating wildfires. Among those who know Smokey Bear, 75 percent believe that the pop culture icon makes a wonderful role model for young children. And boy, does he know how to speak to younger audiences. Smokey Bear has created a social media presence for himself over the past decade, reaching out to his thousands of followers with information, resources, and PSAs on the dangers of human-created forest fires.

Smokey Bear has withstood the test of time and will continue appearing across television screens, magazine pages, and in classrooms throughout the country. It is almost assured that we — and every generation after us — will continue hearing his iconic catchphrase, even as the advertising landscape continues to evolve: Only you can prevent wildfires.