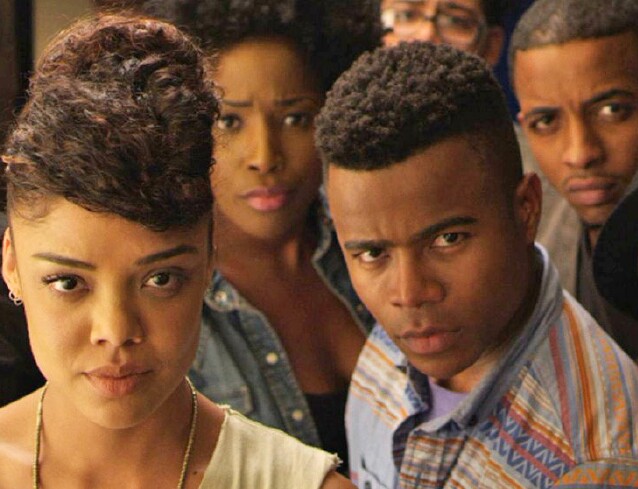 That insightful review by my colleague Ainsley Andrade of this engaging Netflix gem said it better than I ever could, and I won't try to match it here. Instead, I will cobble from it below!  At a time when networks and streaming services are going overboard with remakes, reboots and continuations of past television shows and rarely getting it right, this series stands out as an expanded retelling of a story first told in an acclaimed feature film of the same name (much like Netflix's late-year entry She's Gotta Have It).  Dear White People the series has some of the same characters and actors on board and all of its heartfelt humor and profound social messaging intact, making it one of the most memorable shows of the year.  Or, as Andrade put it:

If you look up “woke” in the dictionary, I’m pretty sure there’s a picture of Justin Simien sitting there.  In 2014, Justin gave usDear White Peoplethe movie, a refreshingly honest social satire that explored racial identity on a fictional campus in a very real depiction of an America that’s not as post-racial as it likes to think. Now, Simien has given usDear White Peoplethe series on Netflix.  Where the movie made the (probably time-based) decision to mainly follow four specific students on campus, the series widens its scope to include more of the supporting characters -- a move that is, in itself, as woke as it gets.

I found the decision to turn the clock back to the movie’s climactic and eye-opening, divisive “Black Face Party” -- a very racist party thrown by white students that parallels the very real events of a frat party thrown at Arizona State University in 2014 -- to be an interesting one.  It goes on to tell a modified version of the original story that focuses on the original main characters and opens up to include their friends and fellow classmates.  Fans of the movie will see re-imagined versions of familiar events but, unsurprisingly, the narrative gets better when the metaphorical town hall hears more than four voices -- and even better than that when we get to see how the campus reacts to the reverberations of that party beyond the movie’s original ending.  For newcomers, there’s enough exposition (cleverly worked in by series narrator Giancarlo Esposito) to bring them up to speed on the who, what, where, when, why and WTF of it all ...

Above (almost) all else,Dear White Peopleis hilarious.  Yes, it comments on everything from social media, police interactions and cultural appropriation to relationship dynamics and race relations, but it’s also funny as hell.  The comedic wit and everyone’s apparent inclination to “clap-back” turns something that could’ve very easily been misconstrued as heavy-handed and opinionated into what feels likeThe Social Networkmeets a less over-the-topNext Friday.  The world needs more of this ... a lot more.