"Dragnificent!" -- The Show That Stole the Spotlight at TCA 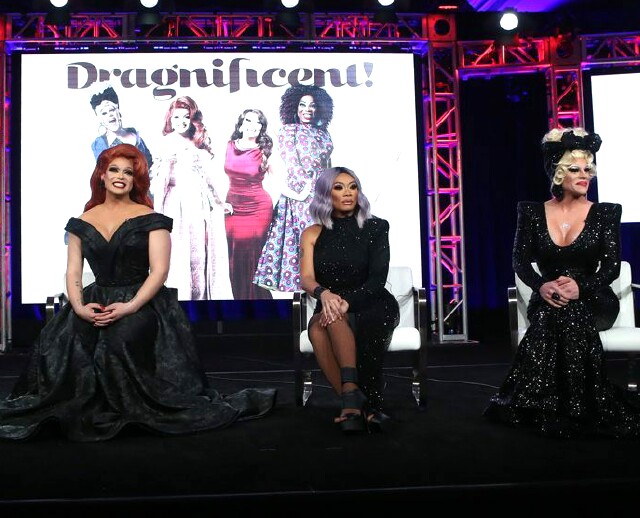 Editor's note:  The column below was originally published on January 17 during the 2020 Winter Television Critics Association Tour.  It offers highlights from Discovery's day, during which panels for eight of its networks were presented.  The standout of the group was TLC's panel for its new reality series Dragnificent!, which makes its time period debut tonight (April 20) at 10 p.m. ET.  It was one of the most talked about new series of the tour, and given its fresh, feel-good approach to the self-improvement/makeover genre, it likely will be during our ongoing quarantines, as well.

TLC introduced Dragnificent!, one of the few new series to excite TCA members, in which four drag queens lovingly help women (and some men) become their best selves.  Stars Bebe Zahara Benet, Thorgy Thor, Jujubee and Alexis Michelle recalled stories of profound transformations with both sexes, how far society has come in the acceptance of drag in the mainstream and the power of owning negative connotations associated with drag and turning them into life-affirming positives. They acknowledged RuPaul’s Drag Race and Queer Eye as trailblazing programs that paved the way for them.  Every journalist in the room was smiling throughout.  This show is gonna be big.

MotorTrend, known as “the Netflix for car people,” presented for the first time at a TCA press tour.   Over 500 hours of original programming are planned for this year, with the content running the gamut throughout such genres as crime, mystery and travel.  A partnership with NASCAR will see a planned documentary series that follows the titans of that sport in a documentary-style reality show.  With Dax Sheppard, Rob Corddry and U.K. import Jethro Bovingdon as hosts, Top Gear America will start production soon for a mid-2020 premiere.  The show promises a U.S. spin on the British version.  All of the hosts appreciate the love of cars, with Bovingdon being the only true authority as a writer for Motor  Trend magazine.  Still, that didn’t stop Sheppard and Corddry from divulging personal stories of special vehicles they have driven in the past.  Another new series, Life Sized Hot Wheels, produced in partnership with toy company Mattel (owner of the iconic brand), will put drivers behind the wheel in life-size versions of beloved classic toy cars.

Food Network announced the upcoming Girl Scout Cookie Championship, a competition series in which professional bakers transforming Girl Scout Cookies into dream treats, to be sold to the public.  It will be hosted by former girl-scout Alyson Hannigan, who shared dramatic stories about selling the iconic cookies when she was a kid.  Her cookie-selling days were short lived, but that didn’t compromise her passion for the beloved treats.  Inspired by the contestants on the show, Hannigan said she wishes she had been a better scout.  Regardless, she did okay.

Discovery introduced a new reality series titled Rob Riggle: Global Investigator, in which the actor and comedian travels far and wide seeking answers to some of the world’s biggest mysteries.  Everything from buried treasure to UFO sightings will be explored.  Riggle admitted that he has no special credentials for the gig other than a passion for adventure.  He feels he’ll be an advocate for the show’s audience, as he knows what he likes to see.  One discovery he could have done without, he shared, was finding himself waist-deep in fire mud, which is infested with ghastly parasites that are known for nibbling on people’s private parts.  He compared the experience to rubbing Icy Hot where one should never rub such things.

ID will be keeping up with the Kardashians, having recruited Kourtney K to host Love Gone Wrong and Khloe to produce Twisted Love.  On a way more serious note, the film In Memoriam (premiering February 8) explores the horrific spate of mass shootings in recent years throughout the country.  (We were told a mass shooting now occurs every 12 days on average.)  Spanning from Las Vegas to Sutherland, TX, to Parkland, FL and all points in-between, victims of these horrific events share their tragic testimonials about the lasting impact of these senseless murders.  The filmmakers (and ID executives) are hoping the movie affects change.  Best of luck, everyone.

OWN continues to focus on stories of the contemporary African-American experience via it’s scripted series.  Each episode of Cherish the Day, a new scripted anthology series from award-winning creator and executive producer Ava DuVernay, will explore a passionate romance within the time frame of a single day.  A self-proclaimed sucker for love stories, DuVernay wanted to see black love stories on TV, which, she said, “We don’t see enough.”  Legendary actor Cicely Tyson, who stars, captivated critics, with tales of her career and how at 95 she attributes her youthfulness and longevity to appreciating and being thankful for each and every day.

Having rounded out 2019 as one of the top 10 networks, and with 37 million viewers every month, HGTV announced its intent to produce over 700 hours of original programming, including such new series as Unsellable House and 100 Day Dream Home.  Frozen in Time with Maureen McCormick will follow the former Marcia Brady as she drags the interiors designs of time-warped homes into the current century.  Extreme Makeover Home Edition, which began life on ABC 17 years ago, returns February 16 with an updated format, transforming the lives of 10 lucky families.  The prior incarnation of the series was often criticized for leaving its benefactors with higher property taxes and unaffordable home expenses.  HGTV’s version includes clever ways to offset the costs of those raised taxes and home re-evaluations.  As host of the revamped version, Modern Family co-star Jesse Tyler Ferguson feels he’s representing fans of the franchise.  “It’s like I’ve been picked up and dropped into the show,” he exclaimed.

Discovery president Allison Page told us that Magnolia -- a.k.a. the Chip and Joanna Gaines network -- has over a dozen shows in production.  “You will see Chip and Joanna in multiple shows across the network, but you will feel them and the spirit and intention of Magnolia in all of them,” she said.  Magnolia debuts October 4.

Discovery’s morning concluded with puppies, brought in from a local shelter to promote Animal Planet’s Puppy Bowl XVI on Super Bowl Sunday.  Journalists who have been away from home -- and their beloved pets -- couldn't resist.  Playing the puppy card at TCA works every time.