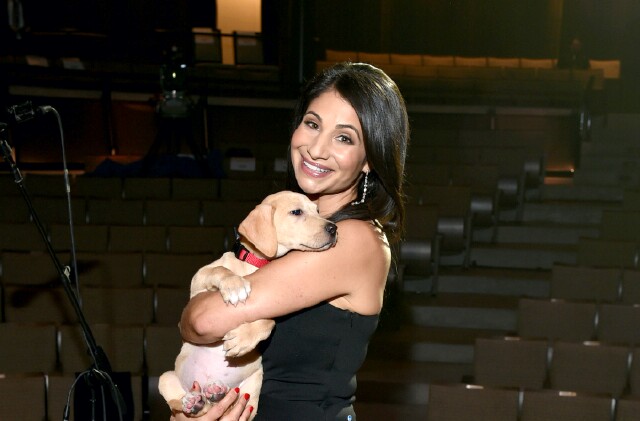 Following its annual telecast tonight of the American Humane Hero Dog Awards®, Hallmark Channel will continue its pet rescue initiative with The Love of Dogs Benefit Concert.  The special, hosted by the network’s own pet adoption expert Larissa Wohl (pictured at top), was taped before a live audience at the prestigious Country Music Hall of Fame CMA Theater in Nashville, and features some of country music’s biggest artists including Lee Brice, Hunter Hayes and Easton Corbin.  Hallmark’s goal is to raise much-needed funding for the Pedigree Foundation, with which it teamed up on this event.

Given that it’s all a part of Hallmark Channel’s expansive Adoption Ever After initiative, it couldn’t have been for a better cause.  To date, the initiative has helped more than 40,000 pets find forever homes (some of them with Crown Media employees, others with Crown Media clients), and for emcee Wohl (a confessed country music fanatic) it proved another example of why she loves her job.  “Basically, this was heaven for me,” she said in an exclusive MediaVillage interview.  “I adore all the artists who participated.  They are all wonderful hitmakers, and in between performances I got to talk about our Adoption Ever After initiative and the Pedigree Foundation and how and where the donated money would be going."

When it came to the dream event, the only thing Wohl had a problem with was convincing herself it was real.  “I received a text message one day while I was about to do Home & Family, asking if I might be interested in hosting this special.  It was country music, in Nashville, and for adoption awareness, and I swear, I looked at it and thought, 'I don’t know who this text was meant for, but it clearly wasn’t me.'

“I instantly agreed,” she continued.  “I later called the organizer, who laid out what it was to be.  She had no idea what a huge country fan I am, so I had to ask if it was for real.  If it wasn’t, this was about the meanest joke that anyone could play on me.  She assured me it was, so, obviously, I was in, but I kept it a secret up until a month before it was happening.  The network's great publicity team started talking about it and then I thought, 'Wow, so this is happening and it’s not a joke.'  I just believed there’s no way it was coming to fruition; that the day before I would get a call telling me that Taylor Swift was going to do it and I would be out."  (Pictured below, left to right: Bo Seger, Easton Corbin, Hunter Hayes, Deb Fair, Crown Media Family Networks executive vice president programming and publicity Michelle Vicary, Jillian Cardarelli and Lee Brice.) 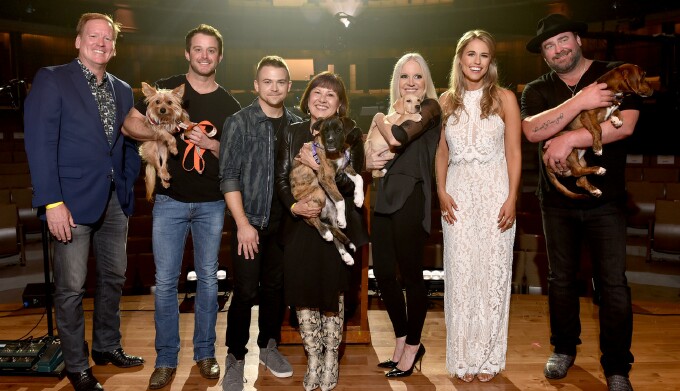 Wohl tells me she got to Nashville a few days early to prepare for the event, and during that time her country dream sunk in.  “I spent a day taking out a couple of dogs from the Nashville Humane Association," she explained.  "They have a wonderful shelter there, and Easton Corbin and I took the dogs on a fun day around Nashville.  We got to showcase fun, pet-friendly locations and see the city while spoiling the dogs.  It was fun getting to meet people, and that's what it's all about, the fact that no matter where you go you can find amazing animals who bring so much joy.  This is a great partnership.”

The biggest highlight for Wohl was hearing the emotional stories of what each performer's pets meant to them.  "Lee Brice talked about the dog that he's had for 17 years that he moved to Nashville with him," she said.  "He has a huge passion for animals and knows firsthand how much joy they can bring.  Hunter Hayes, I believe, has two rescue dogs, one a retired greyhound.  It was so nice to hear what having a dog's companionship meant to them.  Hunter told me having a dog gave him ‘peace.’  I liked that a lot."

According to Wohl, all the performers "could not have been nicer."  They all shared a common passion and the fact that participating in the event was so important to each, touched her.  "These performers travel so much," she said.  "They had a night off in their hometown and could have relaxed, but they all came out for this, and came out strong.  To me, that was so wonderful to see."

Wohl firmly believes Hallmark Channel and country music share a kinship, and in her mind this special is the perfect meld.  "Our movies are kind of like country songs," she shared.  "Those songs are powerful because they do tell beautiful stories.  Sad, happy; they cover everything and are told so beautifully with their rhythms.  I think that's why people relate to them, and our movies are very similar.  We cover happy things yet touch upon things that aren't the happiest experiences.  Everyone goes through their trials and tribulations, but they usually come full circle and are always palatable -- it's such a great mixture.

Estimated totals from event, that also included a golf tournament, are at $325,000.   Pedigree Foundation and Hallmark Channel are hoping to raise even more money through tonight’s special with a Text to Donate option.  Viewers can make a donation by texting Dogs Rule to 615-392-1626 or visiting pedigreefoundation.org.

"I have to admit, I was totally freaking out doing this," Wohl said in closing.  "I really tried to keep my cool, but I was freaking out.  I don't know how I got to be so lucky!  I get to work with dogs, be on a network I adore, and now get to delve into the country world? It's wonderful, and I just hope that it continues to grow and grow."

The2019 American Humane Hero Dog Awards®, hosted by Beth Stern and James Denton, will be telecast Monday night at 8 p.m.on Hallmark Channel.  The Love of Dogs Benefit Concert will follow at 10 p.m.