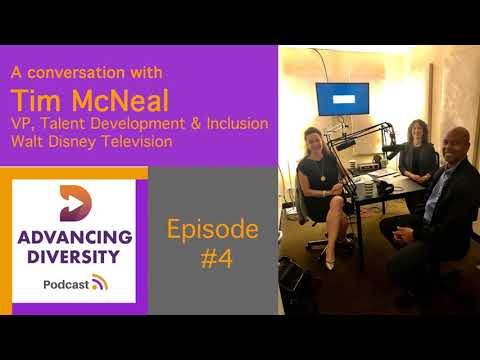 When MediaVillage hosts its third Advancing Diversity Hall of Honors on January 8 at CES, the advertising and media community will have an opportunity to join hands in solidarity and support of diversity, inclusion, and action.Leading into that event, each of our 2020 inductees has shared the strategies and best practices they have used to accelerate the move from advocacy to activism. In this installment — with its companion podcast episode — Ginger Conlon, editor-in-chief, and E.B. Moss, head of content strategy for MediaVillage, shine a spotlight on Tim McNeal, vice president, creative talent development and inclusion, for Walt Disney Television.

McNeal is empowered to expand Disney's pool of diverse creative talent and champion their careers companywide. As a former programming executive, he brings a unique understanding of the inherent challenges and best practices required for solving for diversity and inclusion (D&I) within the entertainment industry, where women and people of color are significantly underrepresented. McNeal is a champion of otherness and a "gatekeeper" encouraged to infuse the creative talent pipeline with qualified, diverse candidates. His strategies have yielded powerful results.

The following is an abridged version of the deep-dive conversation. Listen here to the full interview. Subscribe or listen to the Advancing Diversity Podcast on> Apple Podcasts, Stitcher or watch on YouTube or listen to the entire podcast here.

On a grand scale, it is to impact the content and programming that Walt Disney Television produces to ensure they are inclusive and reflective of the real world. On a more granular scale, it's about talent development and closing the gap for diverse creatives in this space, so they can connect to jobs within our company.

Ginger Conlon: What was the genesis of your current talent development strategy?

McNeal: When I arrived at Walt Disney Television in 2006 ... I saw that the talent development team was engaged in career development, which is educating people on what it [takes] to have a career in this business. Coming from my background as a creative executive working with diverse talent, I knew that there was a vast population available with the skill set to write, produce, and direct programming … yet, they weren't connecting to our job opportunities. So, the first thing I did was shift our focus to staffing; this act transformed the landscape as it allowed us to identify qualified candidates within our professional development pipeline who we may have otherwise missed.

Conlon: What ignited your career direction?

McNeal: When I was a little kid, I saw a movie called The Idolmaker … I knew at that moment that I wanted to work in the entertainment business. I embraced the idea of being the person behind the scenes that propped others up to go after their dreams. That's what drew me to Hollywood.

My career took off when I became … one of five people of color in the agency talent representation business in the 1990s. Almost every person of color came through my office at one point or another.

Next … at WB Network … I became the highest-ranked African American male in programming at the time. It gave [the] ability to empower people who I believed had a voice or a unique perspective that should be shared. My subsequent move to Walt Disney Television allows me to impact the lives of many diverse talents in the creative realm. 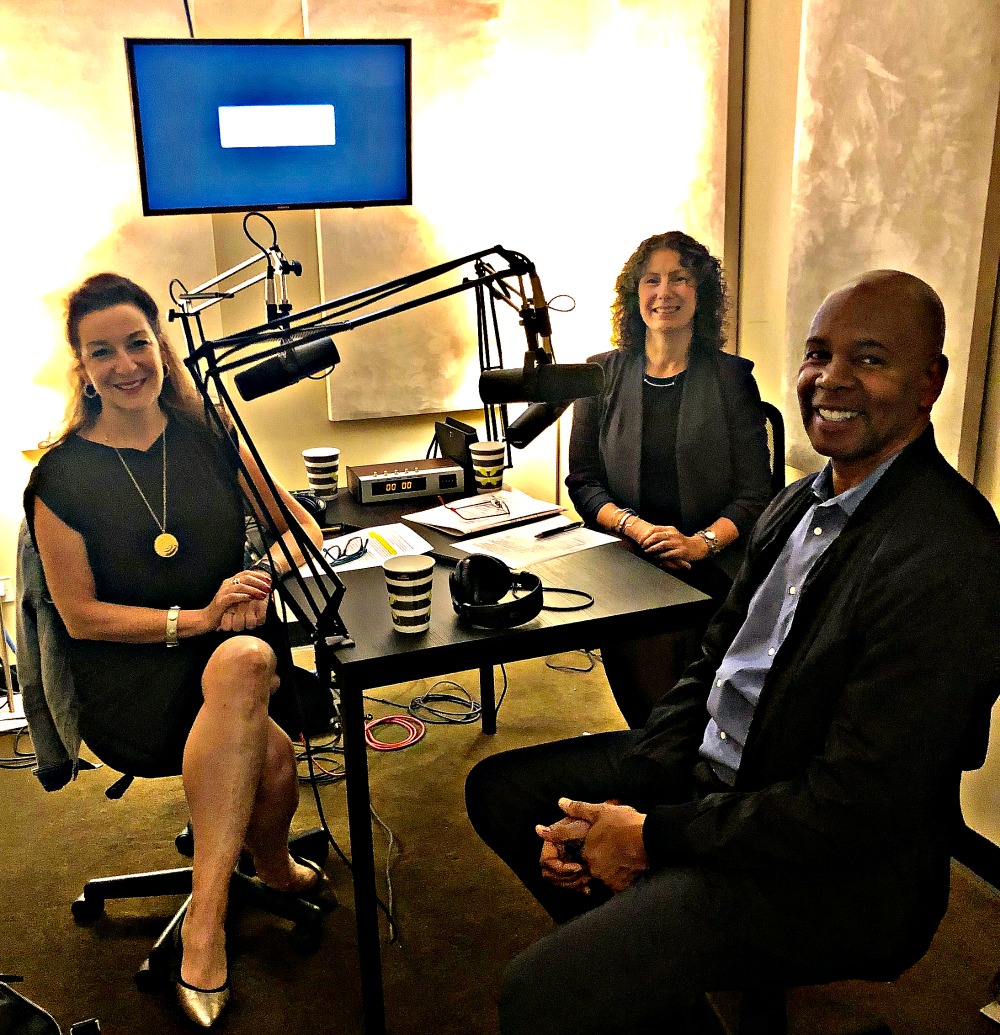 Conlon: As a storyteller, tell us a story of someone who your work has impacted.

McNeal: There are so many … and, I'm so proud of each. One example is a young man that I met just as I was coming into this position. He [had] recently moved to Los Angeles as an aspiring writer.

I encouraged him to apply and he was accepted to our Television Writing Program. Initially, he was staffed on a show that "wasn't his voice" but became an opportunity for him to learn the craft and build relationships. Today, he is the executive producer of a show that we've just launched called Mixed-ish, a spinoff of Black-ish. The show is about people who are of mixed race who are just now coming into their own.... As he is of mixed race himself, it's also an opportunity for him to tell his own story in the framework of this show. This is an example of the impact of our Writer's Program, which has guided over 250 individuals to date.

Conlon: With such a big remit, any misconceptions about what your organization does?

McNeal: The biggest misconception is that we're about checking the diversity box by recruiting emerging talent. We know that there are thousands of credentialed, diverse, and qualified writers, directors, and performers who are not being identified for competitive positions within entertainment. They're experienced and, when they're heard, they can make a difference, not just in content, which is the end game, but also in the hiring of other diverse talents. That's the start of real transformation.

Moss: Where do you see opportunities to expand inclusion within the company?

McNeal: We need to do better on ageism and for people with disabilities. There is a systemic problem around ageism, as industry veterans don't seem to be valued by the Industry. We can learn from them, which will help to elevate our work.

On the other end of the spectrum, we launched our intern and production assistant program this year and have already hired 15 production assistants who are working on shows under the Walt Disney Television umbrella. Our goal is to hire five to 10 individuals on each of our television studio platforms in year one. As each show gears up for production, we reach out and share that we can deliver qualified, diverse individuals that they can consider.

Conlon: Are you seeing an increase in the number of senior-level positions dedicated to diversity and inclusion across the industry?

McNeal: Diversity and inclusion has gone from being something that people ran from to a concept that entertainment companies have embraced as an imperative. I can only speak for The Walt Disney company, but every position [and] every executive position that comes available, especially on the creative side, we have a commitment to identifying diverse candidates for those positions. We still have some work to do in terms of going beyond the intention and actually following through with hiring those individuals, but it's very important to us [to do so].

Moss: Can you talk about your role with Color Entertainment?

McNeal: I'm on the board of Color Entertainment, a volunteer organization of diverse creative executives that started when there were very few of us in the business. Over time, we formalized the organization, which is composed of over 400 diverse creatives. Each member is committed to fellowship and comradery.

Part of our strategy is to build relationships with corporate leaders and their direct reports on the creative side, through a signature dinner, that we host quarterly. We don't actively recruit at the event; instead, we plant the seed of a relationship so, when opportunities come available, that hiring executive can say, "I met someone at Color Entertainment at that dinner who I think would be right for this role."

Moss: It sounds like you activate on those personal connections.

McNeal: The success of my job has been inspiring people to think differently, one person at a time. And I attribute my success to that frame of mind. It's about being an ambassador [and having] people see me as a peer … and as a reference point of how they're going to perform and deliver and fit into their environment.

I do get some pushback from my community: Why do we always have to be the ones who have to make other people feel comfortable? To make change, sometimes that's what you have to do.

Moss: What put you on this path to help others?

McNeal: It's a little cliché, but my parents were incredible role models. I was one of six kids, my mom was a stay-at-home mom, my dad was a physician.… They led by example. They were always kind and giving. I learned to share and make sure that the people around me were not suffering or struggling, because if they are, then you are. I always wanted to make sure that I help to elevate others.

Conlon: What's been most rewarding working in talent development?

McNeal: My day starts with gratitude. I have an amazing team. I think about what my legacy will be, and it's the people. As I continue to lead this team, I want the people to move on and excel beyond what they've done here. I'm so proud when I see that.

Weaving diversity and inclusion into the fabric of your company is good for business. And we have proof. In this podcast series, our Advancing Diversity Hall of Honors 2020 inductees each discuss the many ways their organizations champion diversity, equality, and inclusion, as well as examine the benefits to their company, constituents, and community. Each episode features one inductee's strategies and best practices that others can adapt to help their organizations accelerate the move from advocacy to activism.