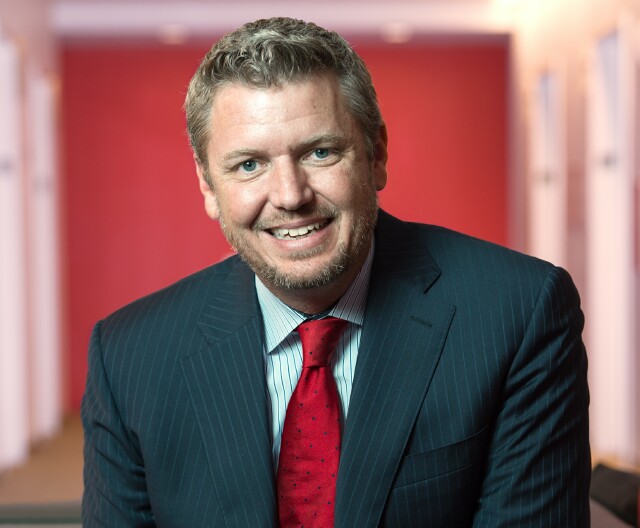 ESPN has taken an aggressive posture with this year’s Upfront selling season.  The sports programmer has put a highly targeted ad campaign in play, anchored on the message “Let’s Be Upfront.”  It has been visiting with agencies about a new measurement tool that amplifies the sports programmer’s live leadership position across platforms, including out-of-home venues.  At its Upfront presentation on May 17 at The Minskoff Theatre, media buyers and planners will also learn about how they can tap into fans’ emotional states with different executions via ESPN’s Live Connect program.

When it comes to the ad campaign that kicked off on May 1 and will run through June 11, ESPN is running messages on kiosks outside the New York City headquarters of WPP’s GroupM, Publicis’ Mediavest and Interpublic Group’s Magna, as well commercials on elevator screens in office buildings.  Stripping out the agency references, the ads have also appeared in The Wall Street Journal, The New York Times and other outlets. 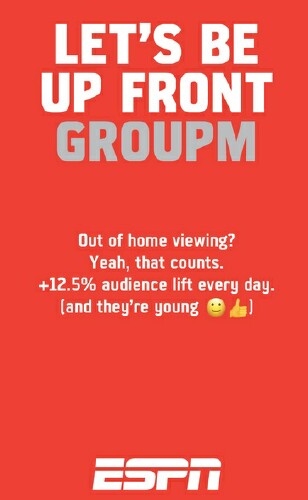 The messaging touts a number of subjects -- ESPN’s use of third-party measurement validation, the audience lift among the 18-34 demo provided by out-of-home vehicles in the first quarter, and primetime viewing.

ESPN is also tackling what Executive Vice President of Global Advertising Revenue and Sales Operations Eric Johnson (pictured at top) calls “mistrust in the marketplace,” stemming from ads running against inappropriate content on YouTube and measurement issues with Facebook.

“When it comes time to measure up. We rely on third-party validation,” reads one ad.  “Transparency and accountability. Demand it. We do,” states another.

Johnson said there is anxiety over measurements, as clients are “questioning whether they are getting their money’s worth from their investment. Fundamentally, he said, ESPN is “clear and clean” and won’t run ads in inappropriate environments.

ESPN delivers against different platforms and measures executions on SnapChat, Roku, PlayStation Vue and other vehicles, Johnson noted, adding, “We are the credible, verified source for connections to live sports, news and information across platforms.”

Those attending ESPN’s Upfront presentation also will hear executives discuss Total Live Audience, a new measurement tool that combines set-top-box viewing data with streaming views and out-of-home viewing.  Johnson said the programmer has been working with Nielsen on this endeavor for a couple of years.  “It’s one measurement tool, one posting,” he explained.  “It’s a unique offering to the market.”

Johnson said that with most of the market going to C7 -- viewing of more than half of entertainment programming is now time-shifted, he noted -- ESPN is at opposite end, with 96% to 98% of its viewing occurring live.

“The market is zagging, while we’re zigging,” he declared, noting that ESPN has presented Total Live Audience to a number of agencies. “The reception has been very positive as we come to market.”

With live viewing, ESPN plays an important role in the delivery of sales/promotional executions for such categories as movies, QSRs, automotive and retail, Johnson continued. Total Live Audience reflects the continued growth of streaming, as more people are consuming sports on their phones, tablets and laptops, as well as from out-of-home destinations.  ESPN conducted a custom study with Nielsen over the past year and research found that only 25% of out-of-home watching occurs in bars and restaurants, with significant portions found in hotels, gyms and second homes, among other venues.

Johnson said ESPN has transacted deals reflecting out-of-home viewing with a number of clients against varied sports, each of which benefits from different levels of audience additions.

ESPN and ESPN2 are the first official clients of Nielsen’s National Out-of-Home Reporting Service.  Johnson hopes that will translate into more business. “Having third party validation is always better than doing your own homework,” he noted.

ESPN will also be touting its Live Connect platform, the product it introduced at last year’s Upfront.  By utilizing data and tying it with the live sports environment, ESPN has worked with marketers to create a variety of messages and then deliver different executions, based upon the outcomes in live games and highlights and a fan’s expected emotional state. Live Connect enables the programmer to take advantage of the preferences entered or selected by millions of registered users of ESPN.com.

Johnson said Live Connect centers on the emotional state of sports fans, whether they are in “anticipatory” mode before a season or game, or “elated or depressed” based on the scoreboard outcome.  “We’re looking for the proper message, the proper emotion, the proper response,” he explained.

Clients have received an assist in this pursuit from Creative Works, ESPN’s in-house agency and promotional unit, which has helped produce different executions.  The idea is to tweak the message, delivering the right creative to the right target.  As an example, he pointed to two guys of the same age and income level, residing in the same apartment building.  The difference: One is a New York Jets fan, the other roots for the New York Giants.