On "The Good Fight" It's Diane Lockhart for the People 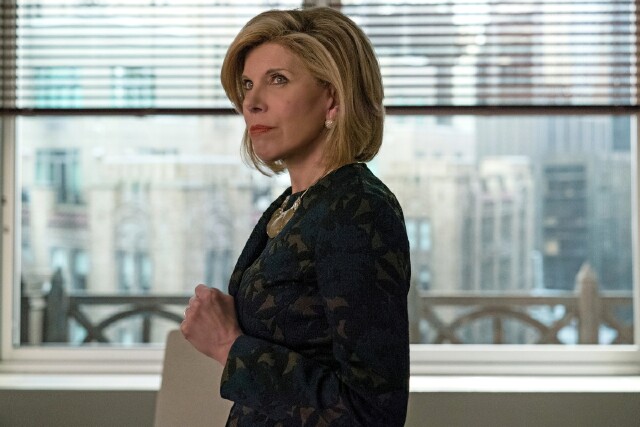 Focus.  It was the single most important aspect of CBS All Access’ The Good Fight during its first season.  As it happens, its second season is no different.  Our perception of the world we live in is shaped by our personal experiences, and those experiences by the information we focus on throughout our day-to-day lives.  It’s this idea, especially during TGF's sophomore year, that’s lead me to believe that this series is less a look into the trials and tribulations of lawyers at a high-end Chicago law firm than a case study of the American people.  How does one deal with the most globally traumatic event in recent history: The presidency of Donald J. Trump?  The Good Fight has a few suggestions, all of them complicated.

In Season One, the very first image of the very first episode was Diane Lockhart (Christine Baranski, pictured at top and below left) watching the inauguration of our current president.  She sits motionless and confused; a representation of the shock that many Americans found themselves in at that moment.

In Season Two, the first image is exactly the same: Diane sitting in front of a television, reeling over recent events that have shaken this country to its core and wondering what they mean for all of us going forward.  The world has lost its goddamn mind, and Diane’s reaction to everything throughout the season is supposed to reflect the emotional rollercoaster that we, the people, currently find ourselves on.  The titles of the episodes in Season Two are numbered days (Day 436, Day 457); watching them tick by speaks to the feeling of captivity felt by the more “woke” half of this country since January 20, 2017.

Speaking of being “woke,” Diane seems to be the only one that’s paying attention to any of this.  Sure, fictional people in the show are talking about Trump and what he’s doing, but their interest seems to depend greatly on how (and if) his administration specifically affects their lives. 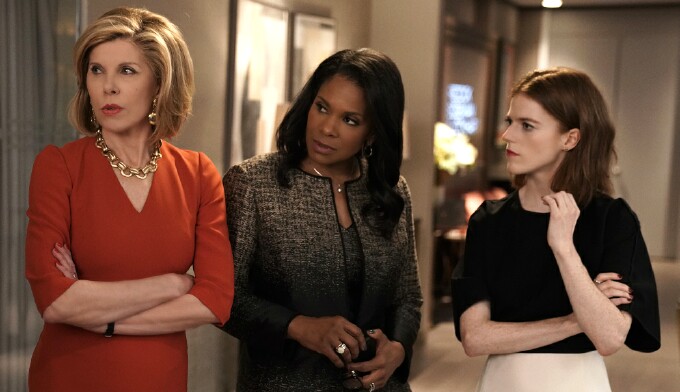 This brings me back to the idea of focus.  Consider the many other fascinating characters on TGF's expansive canvas.  Maia Rindell (Rose Leslie, pictured above right) is focused on her white-collar criminal father and the repercussions of his actions in her life, not to mention building her career. Adrian Boseman (Delroy Lindo) has made his top priorities the financial success and survival of his firm.  Marissa Gold (scene-stealer Sarah Steele) is determined to become an investigator and wants to be increasingly valued as an employee.  Lucca Quinn (Cush Jumbo) and Colin Morello (Justin Bartha) are dealing with their fractious relationship and are preoccupied with their future as parents of the child Lucca is carrying.  Liz Reddick-Lawrence (Audra McDonald, pictured above center) wants to uphold her father’s good name, and Jay Dipersia (Nyambi Nyambi) is a company man through and through.

Diane, like everyone else, has a slew of concerns to be preoccupied with, both personally andprofessionally, but unlike everyone else seems to be hyperaware of the insanity that’s gripped the country.  The second season is littered with shots of Diane watching the news, and even when she isn’t doing so she can’t seem to avoid seeing the effects of our orange-toned president’s poisonous postulations in everything from home shopping networks to children’s programming.  The man is unavoidable.  The ridiculousness of it all only increases once Diane starts microdosing psilocybin -– the active ingredient in the psychedelic “shrooms” -- as a coping mechanism.

You see, a lot of times when she’s watching TV, or laughing uncontrollably at, say, two people having sex in Trump masks, she’s already pretty high.  This, along with throw-away lines here or there, hints at the idea that a good chunk of the Trump-related buffoonery she’s been seeing is a fabrication of her own mind.  The punchline?  The stuff that’s been happening in real life is literally stranger than the fiction cooked up by Diane’s brain on drugs -- and amazingly, all of it is equally believable.  Sad.

The biggest shock in Season Two is (spoiler alert!) the shooting of Adrian Boseman right in the lobby of the Reddick, Boseman & Lockhart law firm.  Adrian lives, but of course this terrible event has a huge impact on everyone.  This is especially true of Diane, who finally finds herself ready to kick the microdosing habit.

Speaking of kicking, Diane’s decision to stop dosing and start fighting back leads to her taking up Aikido, a modern Japanese martial art whose name often translates to “the way of harmonious spirit.”  Through practicing this martial art and the philosophies that guide its teachings, Diane demonstrates through physical action that her modus operandi in life has in fact changed.  (hashtag symbolism)  No longer will she sit in nervous apprehension as this new and terrifying brand of insanity invades her world.  It’s time to fight.  One could also cite the moments immediately following Adrian’s shooting -- in which Diane, amidst the chaos, returned to her office and placed a pistol in her bag -– as an even earlier indication of her motivational tides shifting.  However, that particular move seemed more fear-based than the unquestionably confident decisions she makes as a result of her aikido lessons.

The point?  Her focus finally changes – and intensifies in the process.  Adrian almost dying forces her to realize that even though she can’t control everything, she’s still far from helpless.  This is summed up perfectly by something she says in the same episode: “I realize it’s alright that the world is crazy, as long as I make my little corner of the world sane.”  This enlightenment comes just in time, centering her for the biggest blow to come – long story short, the DNC throws her under the bus in its unrelenting and sometimes toxic efforts to ensure that Trump lose the next presidential election.  (Robert and Michelle King, the creators of The Good Fight and, before it, The Good Wife, don’t hold back from hammering Republicans in their storytelling, but they often bash Democrats as well, which has kept the stories that have run throughout both shows collectively fair, balanced and, most importantly, engrossing and entertaining.)

Diane gets another seismic shock, too.  Thanks to the Trump economy, she has regained the millions of dollars she lost last year in the Rindell scandal.  What is she supposed to think about that?

Her remark about maintaining sanity in her “little corner of the world” sums up Diane’s emotional journey this season, but it does up the same for the people she represents on this side of the screen.  Diane is us.  She is a levelheaded, intelligent human being with enough common sense to know that what’s happening here doesn’t make any sense, and while yes, it is terrifying, and she definitely can’t control everything that’s happening, she can affect change right where she’s at.  Even during her big romantic moment when her husband Kurt McVeigh (Gary Cole) proposes that they stop pretending they can be married part time and “live together until [they] die,” Diane still can’t make a decision without getting an answer to the most important question she can think of: “Did you vote for Trump?”

Like many of us, Diane is now focused on fighting the good fight, and she’ll be damned if she gives up that easily.  And speaking of not giving up, it's Emmy nomination season -- and here's hoping CBS ramps up its campaigning on behalf of this deserving show and its magnificent leading lady. After all those years as the fire in the belly of The Good Wife and now as the lead in its sizzzling spin-off, it's about damn time Christine Baranski was honored with an Emmy Award for her portrayal of the most dynamic female character on television.