Fox's "9-1-1: Lone Star" Proves Everything Really Is Bigger in Texas 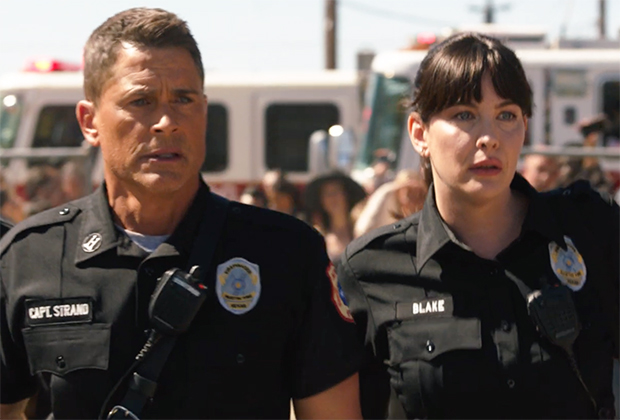 The very cool 9-1-1: Lone Star is coming in hot.  The fiery follow-up to Fox's hit 9-1-1 brings the heat as we follow some very likable first responders into some of the most intense blazes and emergency situations that the Greater Austin Metroplex has to offer.  A lot of the same elements that made the original pop are present in this series, but with a whole new cast, and an entire new locale to explore, not to mention all the interesting new interpersonal dramas at play, this one is dope in its own right.  The flames of this particular fire are as intense as it gets, but you know what they say; everything’s bigger in Texas.

Created by Brad Falchuk, Tim Minear and Ryan Murphy, 9-1-1: Lone Star follows NYFD Captain Owen Strand (Rob Lowe, pictured top and below, left) as he relocates to Austin, Texas, with his son and fellow firefighter, T.K. (Ronen Rubenstein, below right), in order to help the firefighters of Firehouse 126 start anew after the tragic loss of their entire crew (almost).  Also in the mix is Michelle Blake (Liv Tyler, pictured top right), a paramedic who leads the Austin EMS teams.  She’s still reeling from the mysterious disappearance of her sister three years prior that she feels had to have involved some foul play.  Jim Parrack -- who I remember as Hoyt from True Blood, but saw most recently in a chilling episode of The CW’s Two Sentence Horror Stories-- plays Judd Ryder (great name), the sole survivor of the tragic incident that took the entire 126 crew, or as he called them, his brothers. 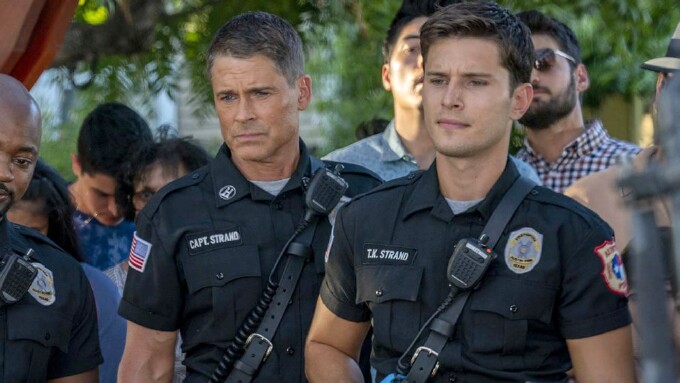 What works for this series is how grounded it is.  A lot of times, shows feel like they really have to take things to a borderline absurd level for the stakes to increase or change in a way that doesn’t end up feeling repetitive or underwhelming over time.  Lone Star doesn’t do that.  Every situation the characters have dealt with so far (and there have been many in each episode) -- whether they’ve been personal or professional -- has been steeped in a healthy helping of reality.  For example, Captain Strand was the lone survivor of his firehouse, the brave souls of which lost their lives on 9/11.  Almost twenty years later he’s been diagnosed with lung cancer.  That’s real.  There was a situation in the second episode in which a woman’s car rolled during a traffic incident and her baby was thrown, still in the car-seat, right into a nearby tree, totally unharmed.  People are thrown from vehicles all time.  That includes children, and sometimes those children are lucky enough to emerge unscathed.  It’s happened.

The most recent episode opened with a young man trapped in a grain silo filled with corn, which, as the show made sure to tackle immediately, sounds silly as hell at first.  The truth is that being stuck in something like that could crush you to death if you aren’t rescued, and it’ll do it sooner rather than later if you panic.  Lone Star is good about balance.  The incident that took the 126 was essentially a manure explosion, not 9/11 -- but the lives lost, the pain felt, the bravery that those guys had to have every time they went out, for exactly that reason, that’s all real.  Indeed, more often than not in real life it’s something stupid that gets you, like choking on a pepper that’s too hot to swallow or drinking so much water that you have literal water poisoning, or some idiot starting a fire that gets your friends killed because he doesn’t know how to use a microwave, and that truth is right there in our faces during every single episode.

That baseline of reality comes in handy so damn much in this series, and that has a lot to do with all the cultural bases that are being covered, as well.  Right in the first episode, a representative of the Austin FD straight up says that of the over 140 firehouses in the metroplex something like 99 have dealt with any “inclusion problems.”  Check.  Then, because Cap Strand needs his new blood to be the absolute best of the best, we’re treated to a classic (and narratively sound) recruitment montage as he builds the most diverse team possible.

Strand, Blake and Ryder are all straight and white, and T.K. is white and gay, as well as being in recovery from opioid addiction.  Judd’s wife, Grace (Sierra Aylina McClain), and firefighter Paul Strickland (Brian Michael Smith) are black, and Paul’s a trans man, as well.  Firefighter and paramedic Marjan Marwani is a female as well as a devout Muslim, and both police officer Carlos Reyes (Rafael Silva) and rookie firefighter Mateo Chavez (Julian Works) are Latino.  Reyes is also gay.

I’m sure I’m missing someone, but the point is that this show is set up in a way that allows for any number of fresh angles at any time.  At its core it seems like Lone Star’s going to mostly be about Strand dealing with his diagnosis while Blake deals with her missing (and probably dead) sister, and Ryder deals with his PTSD, but there’s really no calling it because not only could anything happen, but there’s a lot of room to shift the focus.  The most recent episode delved a bit into Marjan’s cultural beliefs and how they put a specific kind of pressure on her.  Yes, that kind of pressure is different from the kind of pressure Strand puts on himself trying to hide his condition, but it’s still pressure nonetheless, and like the corn in that silly ass silo, panic will only make it worse.

As good as all of that is, at the end of the day the true cherry on top is that this is a legitimately solid show.  Period.  The special effects teams pulled no punches on the explosions, or the necessary amount of gore, while making the calls intense, nor did the stunt team when pursuing the same goal.  The characters are deep and interesting, but this show is also action-packed and funny.  Additionally, there’s an almost palpable respect to the depictions of both Austin, Texas, and New York, New York.

We love to see ourselves on the shows we watch, especially when those shows feature people that are kind, brave and just as complicated as we are.  And we especially admire the hero firefighters, police officers and EMTs on TV, but we love them even more when we can either identify with them personally, or when they help us see life in new ways.  9-1-1: Lone Star is perfectly indicative of how the word “we” is continuing to expand, and the experiences that we allow ourselves to sample through our individual screens is what will decide how the collective “we” sees themselves in the future.  I, for one, like where this is going.