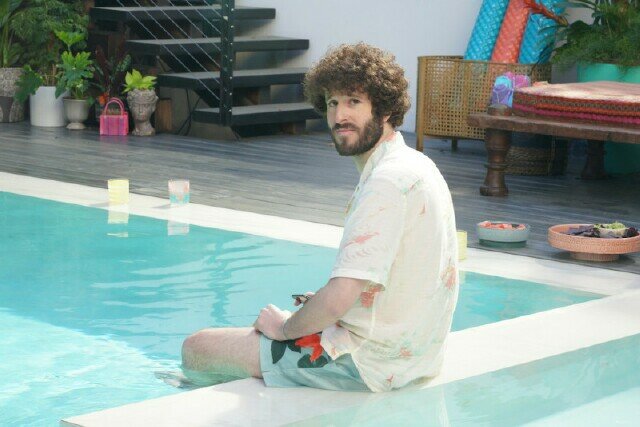 "Surprisingly personal and emotionally honest." That was my description of Dave when it debuted on FXX at the dawn of the pandemic (March 4, 2020 to be exact). After an excruciatingly long wait between seasons, this dope dramedy is back for its sophomore run, but it has a slightly different vibe this time around. What's that vibe? Why, sadness, of course! I'm kidding … kind of. Yes, there's a lingering air of poignancy during the continuation of comically named white rapper Lil Dicky's "success" story, but is it just the general malaise of life in the music industry that I'm sensing, or is it actually that this whole rapper sitch really isn't the champagne and women-filled house party it was all cracked up to be?

Quick refresher (season one spoilers): Dave Burd, a.k.a. Lil Dicky, is a white rapper in his mid-twenties. During season one, he serendipitously meets a dude named Gata at a recording studio. Gata hooks him up with an actually famous rapper, YG, earning him the position of Dave's hype man. Dicky passionately pursues his rap dream, and after ten episodes, he finds himself negotiating a legitimate record deal. Dave and his girlfriend end up breaking up, and L.D. finishes the season with a freestyle on one of NYC's most popular real-life radio shows: Charlamagne and the Breakfast Club on Power 105.1. The implication at the end of that season finale was that Dicky's lil' star was about to rise in a big way, which brings us to season two.

Right out of that gate in season two we find out a few things. For one, Dicky and the gang -- which, in that moment, consisted of Gata (played by himself), Mike (Andrew Santino) and L.D.'s intern (Kimmy Schmidt's Ki Hong Lee) -- are hanging out in the K-pop capital of the world: Korea. It seems that Dicky has successfully nabbed that deal (albeit at the cost of his relationship during last season's finale) and now, after an appearance at a Korean Music Awards show, he'll be using that studio budget to finish his debut album and the video for his first major single called "I Took a Sh*t in Korea." Except, in actuality, nothing is going right for the ol' boy. After losing the K-pop star that was supposed to feature in his song, and then losing his intern to two years of Korean military service thanks to some weird laws, and then revealing that (spoiler alert) he actually has no songs at allbecause of a months-long case of writer's block, it becomes painfully apparent that, yes, Dicky (and his label, honestly) did just take a giant sh*t in Korea. An expensive one, too. And that's just the first episode.

Going beyond the basic plot points, I've noticed that the overall tone of the show has shifted a lil' bit. In the first season, both Daveand the show's eponymous lead character were a bit more optimistic in nature. Dave was insecure, sure, but he believed he could do it, and when push came to shove, he'd prove it. Now that the ink has dried on his contracts and the mountaintop is right in his face, Dave's gotten a lot snappier and singular-minded. Watch the episode for all the details, but just know it wasn't until Dave, Gata and Mike are standing in a Korean jail looking at Dave's intern in a cell that he finally admits there is no album on the laptop that they went there to retrieve.

The air during all these scenes is tense as hell, and the consequences matter, because they stick. No sitcom reset here, folks. Episode two of season two has come and gone and guess what? The intern is still in friggin' Korea.

Another thing I've noticed is that we're two episodes into what's definitely a ten-episode season and yet, zero rapping so far. Well, not zero. Dicky raps during that hilarious mess of a K-pop track, but you know, writer's block, so there isn't a whole lot of lyricism present just yet.

As in the first season, one of the most interesting aspects of this series -- besides all the cameos (so far, we got Hailey Bieber and Kendall Jenner in season two, episode two) – is Dicky/Dave's unique take on sexuality. In the last season we were introduced to his hypospadias condition, and his masturbatory aid that was pretty much a rubber replication of a woman's body from the waist down, and as funny as it all was, it showed us how his insecurities about his condition had shaped his behaviors, and how those behaviors affected his relationship. Not unlike the man himself, Dave does a great job of convincing us that what we're getting is nonsense (i.e. - FX's recent ads featuring Dave and a CG anteater getting hit by a car and comically soaring through the air) and then serving us up the real feels (i.e. his feelings about his ex, or feeling forgotten by his boy Elz).

I could go on about this show for days, but the truth is that Dave just needs to be watched. Lil Dicky is an absolutely ridiculous character, but that man's talent is real, and the stories that the show tells, most of which have to do with mental health, personal relationships and unique takes on life's little situations, are more relatable than one ever could have thought.

Now all we need is for Dicky to start dropping some serious bars again.