"General Hospital" Could Save the Day Again

Forty years ago, the nation was enthralled by two summertime TV cliffhangers: Can "Luke and Laura Outrun the Mob?" on General Hospital and "Who Shot J.R.?" on Dallas. ABC's General Hospital was tops in daytime and would grow into a historic phenomenon the following year when Luke and Laura got married. Dallas, on CBS, was the No. 1 primetime program on television by a wide margin. In hindsight, these two pop-culture milestones from 1980 remind me of the outsize power that broadcast television once held. They also have me thinking about the unprecedented challenges television faces today as the coronavirus crisis continues.

As it happens, the General Hospital of four decades ago may offer a solution to the crisis the show will be facing in a couple of weeks, when it runs out of pre-taped original episodes. How to keep the train moving when the cars are stuck in the station? I would strongly consider rerunning Luke and Laura's 1980 summer-on-the-run adventure in its entirety, from June thru September, if it is possible to do so. (There may be legal and royalty concerns, but I like to think those could be waived or ameliorated in the face of a deadly global pandemic that has millions of people confined to 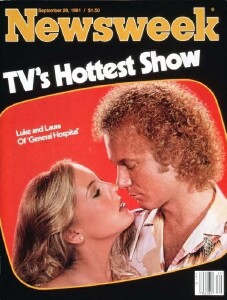 their homes.) Repeating that story would let younger viewers discover what the fuss was about while older viewers enjoy a blast from the past. Gen Zers and younger Millennials might even get a kick out of seeing how young people lived before the internet, smart phones and digital technology, like they do when watching Netflix's Stranger Things. (Vintage episodes of GH, though, would be authentic.)

This is not something I would have imagined happening 40 years ago, or a suggestion I would have considered making 40 days ago (pre-pandemic), but what the hell. That story changed daytime drama. Some say it saved it from itself (by infusing the show with younger characters in high-stakes situations). Maybe it could help once again.

If necessary, ABC could follow that with the wacky, history-making GH story of the Cassadines' weather-machine, which produced a blizzard that brought Port Charles, New York, to a standstill in August of 1981. Luke and Laura found themselves on a tropical island trying to stop a madman while, at home, their loved ones huddled together for warmth and tried to dig out from under several feet of untimely snow. This storyline set the stage for their legendary nuptials in November, so reruns could extend right through to that (and we could enjoy watching Elizabeth Taylor play the menacing Helena Cassadine all over again).

It seems to me that scheduling stunts like these would also lend themselves to all kinds of great content on social media. Throw in some fresh commentary by past and present stars of the show and it's go-time. (I suggest recruiting long-time General Hospital star Nancy Lee Grahn as host of these special rebroadcasts. Grahn and co-producer/co-host Kaore Bonell are doing great work with her new at-home YouTube interview series Soaps in Quarantine.)

On the subject of the clever packaging of reruns, CBS has been doing a fine job with its daytime drama staples The Young and the Restless and The Bold and the Beautiful, which ran out of new episodes a couple weeks back and are now in limbo. The network is choosing select reruns from years past and packaging them in clever ways, with at-home introductions from current cast members. So far, so good. But who knows how long this strategy can continue before the novelty wears off? Daytime drama is all about serialized storytelling, not one-shot episodes or week-long marathons. That's why I like the idea of a full-on replay of an entire story that ran for several months. GH is lucky, because its most memorable tales were fashioned for summer viewing. Surely Y&R and B&B have similar stories in their archives. 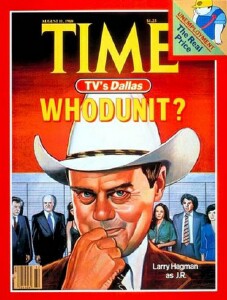 CBS might also consider running arcs from the long-gone and much-missed As the World Turns. Summers at the Synder pond were much hotter than almost anything on television today.

As for primetime, the details of that dynamic Dallas cliffhanger might also put current matters in a different light. Most people have forgotten that J.R. was shot in the final moments of the last episode of the show's third season, which aired on March 21, 1980. The show did not resume until November 7, because a strike by members of SAG had delayed the start of the 1980-81 season, and the identity of J.R.'s assailant (his scheming sister-in-law Kristin) wasn't revealed until an episode that ran on November 21. That was quite a gap, even in those slower times. But absence did not simply make hearts grow fonder; rather, it fanned the flames of obsession. Ratings for Dallas, which was already a blockbuster, climbed even higher in November and stayed there for years to come.

As the COVID-19 pandemic continues to compromise television schedules and the all-important fall season remains a guessing game, keep in mind that TV has withstood many massive messy interruptions in the past, and there is no reason to assume that it cannot do so again ... that is, if the people in charge make the best of the situation and, when they are finally able, go the extra mile to give consumers what they  want.

Granted, this crisis caught Hollywood off-guard, so most of the broadcast, cable and streaming shows in production didn't have time to fashion cliffhangers so tantalizing that their audience levels would surge 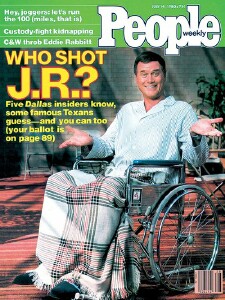 when they returned. Surely, though, the creative talent behind the scenes at all shows, not to mention their stars, can find clever ways to keep fans engaged via social media and digital communication during this prolonged disruption. Many of them are already doing that with all sorts of interesting projects. The most ambitious was CBS' All Rise, which recently did a great job making the best of a terrible situation and delivered a compelling hour of scripted drama that its quarantined cast members shot in their own homes.

I hadn't been all that interested in that series, but after watching that episode, I am. Reruns of All Rise are now on my viewing schedule. I hope vintage reruns of General Hospital will be, as well.