"Helstrom" Is a Scary-Good Huluween Treat 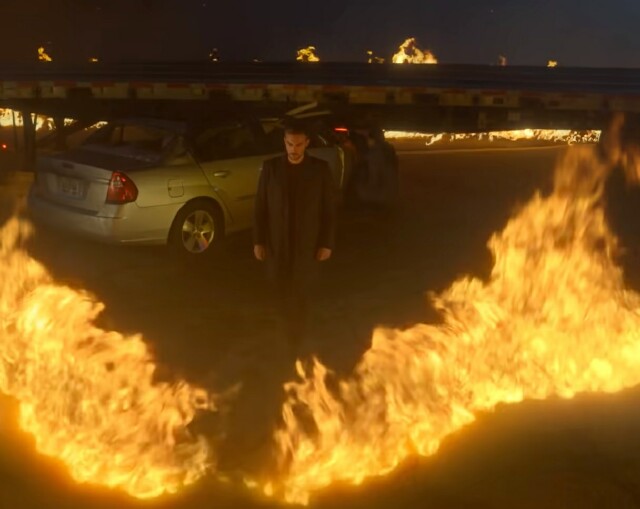 Ever since the popularity of comic book-based properties started to mean big profits for studios, we have gotten a new reimagining of every major character from pretty much every marketable I.P. that could be found. Of course, they weren’t all winners, but once in a while something special would happen and we’d get some kind of masterpiece; something that resonated on a level we didn’t expect it to, or had style and flair beyond what its original form suggested was possible. Hulu’s new original series Helstrom is one such accomplishment, and it's here just in time for Huluween.

Created by Lost and Agents of S.H.I.E.L.D. producer Paul Zbyszewski, Helstrom is ominous, moody, expertly crafted and best of all, gets right to the damn point. It's actually so good that most people wouldn’t even know it was based on an old Marvel comic. (Warning: spoilers ahead)

Helstrom stars Tom Austen as Daimon Helstrom, an ethics professor who had a, uh, rough childhood, to say the least. The only person who may have had it harder was his sister, Ana (played by Sydney Lemmon). When the series opens, Daimon arrives at the home of a couple in distress due to the supposed possession of their only son. The show sets it all up as if a legitimate exorcism is about to take place, but it turns out that while Daimon is genuinely filled with abilities that come from another realm of existence, the only thing the son is full of is shit. The kid plays all the classic cards of a possessee -- speaking Latin, using a weird demonic voice, and generally terrorizing his family -- at least until Daimon calls all those things out as nothing more than tropes learned on TV and in movies. This is essentially the show talking about itself. It’s saying, "Hey, this ain’t one of your daddy’s demon movies. This is its own thing."

See, Daimon has powers that allow him to combat demons that do really exist, mostly because of some evil put on his family by his late father when he and Ana were kids. Daimon was left with their mom, Victoria (Elizabeth Marvel), who was (and still is) possessed by a powerful demon named Mother. Ana wasn’t as lucky. She ended up being kidnapped by their father and taken on a cross-country serial killing spree. After dad-of-the-year’s death, Ana was taken in by a man named Henry (Robert Wisdom) and moved to California, while Daimon was raised by Dr. Louise Hastings (June Carryl), a nun and the eventual head of the facility in Portland, Oregon, where Victoria/Mother is kept.

The thing is, none of this matters. The part that matters is the execution. I’ve seen what feels like hundreds of original series over the years, and its always interesting to me where the weak points are, such as sequences in which it's obvious that the studio was cutting corners on the budget or the clear importance of certain unimportant storylines to the showrunners. I’ve got to say, though, that weak points in Helstrom are all but non-existent.

The first thing I noticed was the emphasis on lighting and camera work, both top-notch. The first shot that has Ana in it is a long one that follows her in a medium close up from behind through a high-end antiquities auction. The camera moves through three different lighting setups as she moves from one room to another to the next, ending with her having done a 180 and facing the wall that was originally behind her when she started (like a U). The camera doesn’t cut until her walk ends, at which point we get the reverse shot that finally shows her face. These semi-long follow takes happen a couple times, usually with Ana at the center (probably because Lemmon looks chic as hell doing pretty much anything).

The lighting is perfect in every scene as well and goes hand in hand with the framing of every shot. I can almost see the full color storyboards used to plan out every frame of this series, and that attention to detail not only helps the show look good, it silently ties all the appropriate themes of any particular scene together through the use of both lighting and color.

As for the actors, well, Austen and Lemmon are just plain cool. Their characters are jaded, cynical and probably in need of a lot of therapy, but listen carefully to Daimon and Ana go back and forth during their car ride with newbie nun Gabriella (Ariana Guerra) in the third episode, and you'll hear the bubbling of their eff’d up childhood underneath all their witty banter and clever comebacks. The coolest people are always damaged. Trust me; I know this.

And then there's Alain Uy, who plays Ana’s business partner Chris Yen. That man’s screen time in the first couple of episodes is minimal, but the dynamic he has with Ana is giant fun. The person who truly steals the show, though, is Elizabeth Marvel. Her constant transitions from loving mother trapped in her own body for twenty years to the ancient evil that trapped her in there are as flawless as they are believable.

Top all this off with an effects department that obviously worked smarter rather than harder with a combination of feature-film-quality practical and digital VFX, the aforementioned attention paid to the photography, and a narrative that was rescued from a much sillier one (in the comics Daimon’s dad was literally Satan, and his sister was named Satana instead of Ana), and what you’ve got is a series so good that I literally stopped watching in order to shorten my eventual wait for the second season that I just know it’ll get.

FX'sLegionwas the first Marvel Comics adaptation to skew into something cooler and way more interesting. But Helstromis on a whole other level. Either way, similarities abound. Take the promotional artwork for example. The season one poster for Legion is an image of its main character holding his face in his hands while smoke and lightning come out the top half of his head. Compare that to the art for Helstrom, which shows the main characters' standing profiles with a smoky, almost liquid kind of matter flowing out the top of their heads. Both shows also have to do with their respective leads being imbued with powerful abilities by their parents, and there being an element of deception by the authority figures around them. (In Legion it’s the people at the psych facility, in Helstrom it’s Louise and Henry.)

All in all, Helstrom is a win, and the perfect addition to Hulu's Huluween lineup.