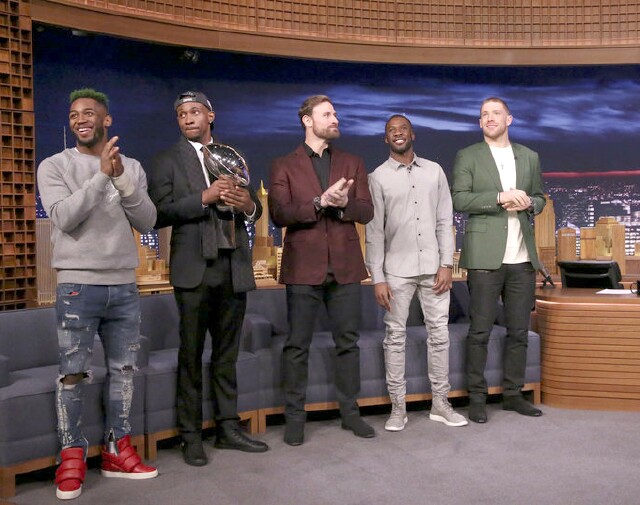 Much to my surprise I am still feeling charged up by the Big Game last Sunday.  I never thought I would say this but watching that epic battle between the Philadelphia Eagles and the New England Patriots – right until the dramatic final moments -- was much more exciting than anything else I saw that night, including the halftime show, the special telecast of This Is Us that came later and, most notably, the commercials.  Sports aren’t a primary focus in my life or my career; entertainment programming always comes first.  But the opposite happened on Sunday.  With apologies to Bill Belichick, Tom Brady and their crew, the Eagles’ first-ever Super Bowl win seems to have helped lift everyone’s spirits to a level they would not necessarily have reached had the game ended with a sixth victory for the Patriots. (Pictured above, left to right, are Eagles Jalen Mills, Alshon Jeffery, Chris Long, Nelson Agholor and Zach Ertz, who appeared Tuesday night on The Tonight Show Starring Jimmy Fallon.)

Further discussion of the game itself is best left to our sports business columnist J.P. Fields.   So I’ll reflect on everything else, beginning with the commercials.  Collectively they made little impact at all, and in some cases made a negative impression, which must be Madison Avenue’s worst nightmare.  Granted, there was no way to predict the sheer power of that game (though it wasn’t the first Super Bowl showdown of its magnitude and it certainly won’t be the last), but as the night progressed it increasingly felt as if the ads were unwanted interruptions rather than enhancements to the viewing experience.  Only those that were truly great were welcome (more on them below).  Most of them are already fading from memory; those in current cycles aren’t nearly as noteworthy when mixed into regular programming and crowded commercial pods.

I can’t help but feel that much money was wasted this year when it came to the conception and execution of all of those big-budget spots.  Maybe advertisers and their clients would be better served by making and showcasing commercials on their own schedule and at their own pace, rather than rushing the creative and breaking the bank to shove them into an overcrowded showcase where only the strong survive.

There were only three ads that made a significant impact on me.  The “every commercial is a Tide commercial” spot was pure genius; so smartly conceived and thoughtfully produced that it deserves a place in the hierarchy of great Super Bowl ads.  It was everything a Super Bowl ad ought to be, and it located the product in a rarified space that should resonate for years to come.  Similarly, the nostalgic Pepsi ad was a winner, one that made multiple emotional connections from beginning to end in the way that the best ads for Coca Cola have always done.  I think it could be replayed in future Super Bowl telecasts, perhaps with a little updating along the way.  My one complaint was the location of the spot later in the game.  It should have kicked off the telecast, allowing Pepsi to set the stage for the event to come, one that still means a great deal to tens of millions of people.  (Apologies if it did indeed run at the top of the telecast.  If so, I missed it.  If not, better luck next year.)

The entertainment highlight of the night, though, was the NFL spot featuring the New York Giants, with Eli Manning and Odell Beckham Jr. reenacting the iconic final dance by Patrick Swayze and Jennifer Grey in the classic film Dirty Dancing.  I agree with our own Stuart Elliott -- what an unexpected treat!  As reinforced on social media at the time, I think there was more entertainment in those 30 seconds than in the entire halftime show, which featured a perfectly fine but in no way special performance by Justin Timberlake.  I don’t think I will ever tire of watching that commercial (in the way others never tire of watching Dirty Dancing, a basic-cable staple that remains as vibrant as ever more than 30 years after its theatrical release).  Come December it will be hard to exclude Super Bowl LII from anyone’s list of the top programming of 2018.  A case could be made for including that commercial all on its own.

Notably, streaming services made their mark during broadcast’s biggest night of the year.  YouTube made clear its determination that YouTube TV become a household term synonymous with Netflix, Amazon and Hulu.  The champion here was Netflix, which seemed to invade NBC with a tantalizing spot for The Cloverfield Prophecy, a movie few people knew was coming and which was made available that night on Netflix immediately following the Super Bowl.  There’s no telling how many viewers it may have siphoned away from NBC’s presentation of This Is Us, which did extremely well.  But the spot certainly reinforced Netflix’s growing reputation as the ballsiest programmer in the business.

Speaking of This Is Us, the special post-Super Bowl episode delivered as promised, satisfying the audience’s ghoulish fascination with the death of Jack Pearson (the superb Milo Ventimiglia).  As predicted, millions tuned in to see America’s most beloved dad die (to which I ask, WTF?).  It may have been the most emotional episode yet of this fine series, which brings viewers to tears almost every week.  But I can’t help but wonder why series creator and executive producer Dan Fogelman and everyone else involved didn’t choose to highlight a happy occasion in the lives of the Pearsons on a night when tens of millions of Americans are caught up in the spirit of teamwork, competition and community celebration.  A wedding, perhaps?  Or a birth?  This Is Us may have brought the drama, but it proved to be a downer.

As Netflix proved with its commercial, sometimes placement is everything.