HISTORY's Moment in Media: How "Upfront" Became a Noun Over Decades of Ad Sales Innovation 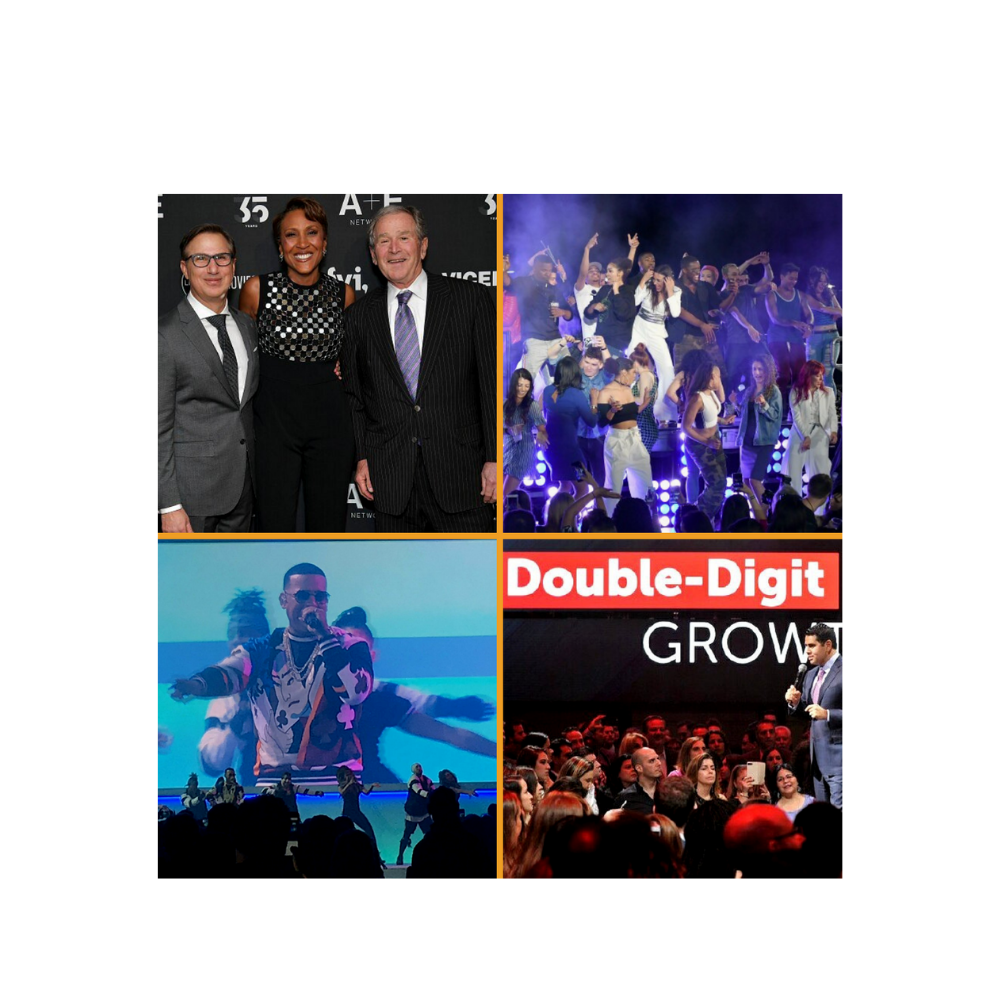 Intimate conversations with a former president, interactive zombies, make-your-own-meth labs and late-night concerts hosted by The Roots.  Welcome to the Upfronts.  The craziest part of the television season is the one most viewers never see.  Throughout the spring and culminating in the third week of May, advertisers from around the world assemble in New York City to get a preview of what the television and cable networks will broadcast the next fall, with the objective of enticing them to commit to spending their dollars up front — hence the name, "Upfront."

As it turns out, roughly 80 percent of network television and 50 percent of cable television advertising is sold during the Upfronts or soon after.  With billions of dollars at stake in a few weeks, the networks go all out to impress their prospective clients.  They bring in stars to pitch the material and circulate at parties; they rent top-tier performance spaces, such as Jazz at Lincoln Center and Radio City Music Hall for their presentations, and they do just about anything to get advertisers' attention.  A+E Networks (owners of HISTORY), for example, brought in former President George W. Bush. AMC, the makers of Breaking Bad and The Walking Dead, became famous for putting on immersive events where participants could make "crystal meth" or be gnawed on by zombies.

But like any modern tradition, this one comes with a backstory.  In the 1950s, when television was nascent, networks would preview their shows' contents to advertisers on no particular schedule.  Advertisers really wanted to know one thing: How many people would see their products?  The answer to that was provided by Nielsen, which measured the size of each audience.

At the beginning, this was a relatively simple process because there were really only three networks: NBC, CBS and ABC.  However, by the early 1960s ABC was falling behind.  It was established in the late 1940s, two decades behind the other two networks, both of which had their roots in radio.  ABC President Oliver Treyz had to do some out-of-the-box thinking.

Treyz realized that auto manufacturers, some of the biggest TV advertisers, debuted their new car models in the fall.  So, in 1962, he arranged to premiere all of ABC's shows in the week after Labor Day.  It was so successful that the other two networks soon did the same.  By the end of the decade, TV premiere week had become a national happening.  The clustering of the fall programming led to the Upfronts because the networks required an advertiser commitment by the spring.

But that wasn't Treyz's only insight; as part of selling its shows, ABC still had to overcome the relatively small size of its audience.  He realized that passionate and impressionable young audiences might be more interesting to advertisers than just a big, un-targeted audience.  He got Nielsen to break down viewers by age, and the valuable 18–49 "youth" demographic was born.  (To make sure he'd take advantage of the new demo, he created and previewed The Jetsons, a space-age animated cartoon that he'd hoped would appeal to younger audiences.)

ABC still had one more big contribution to make to the Upfronts.  Treyz realized that advertisers would be more willing to bet on a show if he could guarantee them a certain number of viewers.  He created the first deal where the advertiser, in this case American Home Products, had to pay based only on a rate per the number of viewers who would eventually watch.  That pricing structure, now known as charging by the CPM, or cost per thousand impressions, became the standard.  He offered a better rate for those who bought earlier, another factor that played into the creation of the Upfronts.

Now there are Upfronts for different categories of shows (e.g., kids), for different languages and different countries.  Digital programming and video games also have Upfronts, but because they are not tied to fall premieres, they do not require the same seasonal commitment of funds.  And while the Upfront landscape changes every year, advertisers keep coming back to see what innovative ideas the content creators will come up with next.