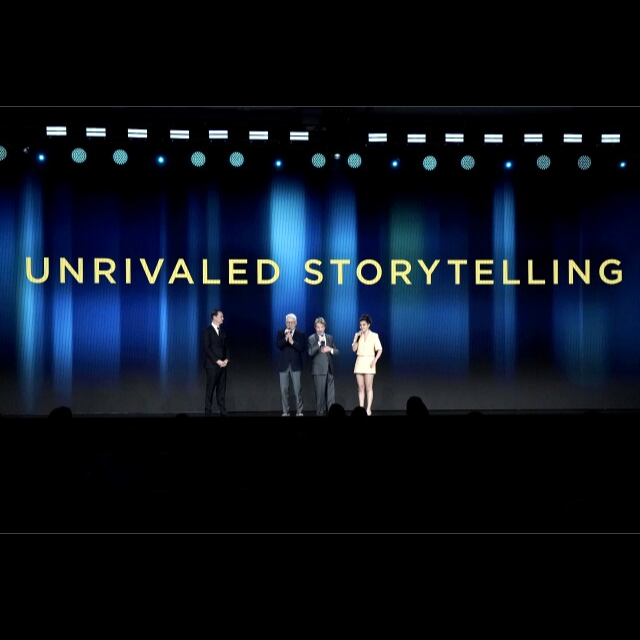 Remember when Upfront Week presentations crackled with energy and excitement? When they were fun and engaging and productive, even before the parties began? Do you recall the thrill of learning which new broadcast shows had been picked up, which returning shows had been cancelled and how extensively each network's schedule would be reworked in the months to come … all of which would impact your professional life in one way or another?

That's all over now -- with one exception. The CW proved that sometimes the established ways are still the best, ending Upfront Week with the kind of informative and engaging presentation that educated its audience of advertising professionals and media journalists while also entertaining them. It was brief and buzzy, and it served as an impactful pre-launch of its network's 2022-23 season. More on that below.

The other big presentations of Upfront Week -- NBCUniversal, Fox, Disney, Warner Bros. Discovery and Paramount -- were something else entirely. Even though they all emphasized storytelling, they didn't so much have stories to tell as stories to show. The historic foundation of Upfront Week events -- the unveiling of new product and the planned roll-out of same -- was all but lost in these corporate mega events which served mostly as reminders about their platforms and the many businesses each of them had to offer.

That's fine … in the new world order, it's all about adtech and streaming and branding and such. (For an expanded take on this, read Gabe Greenberg's excellent analysis, TV Takes a Back Seat to adtech and CTV at the 2022 Upfronts.) But as I was watching this year's events -- after more than 30 years of attending almost every Upfront Week presentation in person (as well as the virtual showcases of 2021) -- I couldn't help but think that anyone in the collective audience who didn't already have knowledge of what was being talked about needs to step up their game. Because there really wasn't much that was new. It was as if each company was offering a refresher course in all the things that it does with its ever-expanding portfolio of assets, this year featuring a stronger than usual emphasis on theatrical movie releases, which enrich brands even as they enhance streaming services.

Was it all too much? Maybe. These information overloads were often dizzying in their depth and breadth. As one veteran Upfront Week observer texted to me while we watched from the comfort of our home offices, "Some companies have gotten too friggin' big." Truth!

While the content was largely impressive, and the execution often technically dazzling, the redundant messaging -- "We're the biggest and the best." -- often couldn't get out of its own way. Were the events helpful or not? That's up to each of us to decide.

As I always point out in my Upfront Week reports, everyone involved in all the presentations deserves enormous credit for putting them together and pulling them off. It is a titanic amount of work, even more so today when they include virtual options, meaning each event must simultaneously engage hundreds (or thousands) of people in person while holding the attention of even more people watching on various screens.

And speaking of that, the production values of the 2022 virtual presentations were by any standard deluxe. Disney was especially dynamic, though that came as no surprise, as the company was also celebrating its 100th birthday. (It's had a lot of time to practice.) I can't speak to the experience of attending them in person -- for that, check out the reports from my colleague Simon Applebaum in our Upfronts and NewFronts archive -- but watching them remotely was a distinct pleasure. They in fact felt to me as though they were produced primarily for streaming. Being equally effective in person and via video feed is certainly a challenge, one they all met with terrific results.

And now, here are brief hindsight reflections on each of them, in order of presentation.

NBCUniversal opened the week with its usual Radio City spectacular, which was as reassuring as it was rewarding. Even if the rest of the world is one big mess, Upfront Week as it has always been known was back and starting off on the right foot in the grandest venue of all. There were plenty of on-stage appearances by key executives, from Jeff Shell to Susan Rovner to Linda Yaccarino, and celebrities from all corners of the NBCU empire (especially Bravo). The show opened with a performance by Kelly Clarkson (of NBC properties The Voice, The Kelly Clarkson Show and American Song Contest, pictured below) and closed with Miley Cyrus (NBCU's new New Year's Eve star) singing her hit "Wrecking Ball" and Madonna's hit "Like a Prayer." (Why the latter? Who can say?) Seth Meyers put it all in perspective. "Radio City Music Hall!" he raved during his usual routine. "What a historic room to be able to tell people you caught COVID in!" Perhaps even more on point: "We've had to be agile and forward-facing … and yet this is still how we're doing the Upfronts." 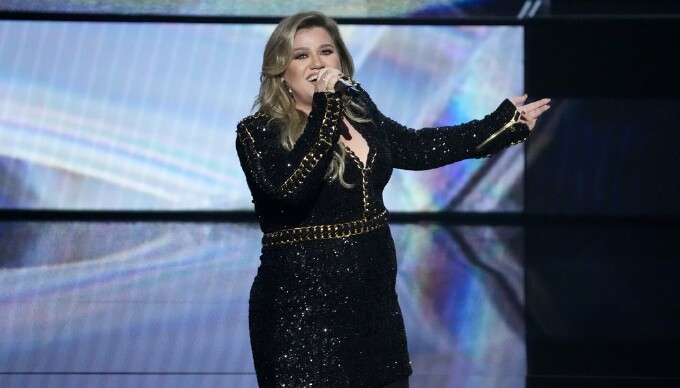 Foxhad a tough act to follow … and presenting most of their big show in pre-recorded videos may have hurt more than it helped. (As Jimmy Kimmel said to the audience during the Disney event, "Fox tricked you into taking an Uber to watch a tape!") But its presentation was fast-paced, clutter-free and extremely informative. Tellingly, Fox didn't see fit to include details of its fall schedule, but as I said at the top, this is a whole new ball game, and the very idea of having to watch a show at the time it is traditionally scheduled now seems positively quaint, so maybe the absence of a schedule wasn't as noticeable to younger attendees, who for better or worse watch what they want when they want. As I watched Fox's pre-recoded videos, I couldn't help but wonder if in-person Upfront events were even needed anymore. They will probably migrate to the Metaverse before too long, and I'm betting Fox gets there first.

Disney did such an amazing job with the virtual component of its event that I didn't for a minute mind not being there in person. In fact, with all those crisp close ups of and clear concise messages from company executives, personalities and entertainers I think I got more out of it watching at home. (You know that moment during Upfront Week presentations when all you want to do is get out of whatever venue you are in, get a little fresh air and then relax with a coffee or cocktail -- only to realize there is another hour to go? Doesn't happen at home. Just saying.) As with NBCU and Paramount, the broadcast network at the center of it all seemed a little lost amid the company-wide razzle-dazzle, but that was to be expected. (In his annual routine, Jimmy Kimmel said of broadcast television, "We're a fax machine five years after they invented e-mail.") Whatever it is that in-person Upfront Week events are becoming, this one left no doubt that Disney will be out ahead of the pack. (That's Peter Rice, President Disney General Entertainment and the stars of Hulu's Only Murders in the Building Steve Martin, Martin Short and Selena Gomez pictured at top.)

Warner Bros. Discoveryhad no broadcast entity at its center -- just more cable networks than anyone can count so soon after the mega-merger of Warner Media and Discovery. As it joyously jumped about from CNN to HBO to HGTV to discovery+ to Food Network to TNT to Magnolia it wasn't difficult to follow, but it was tough to process. Is WBD greater than the sum of its parts? I don't know. But most of those parts are so powerful they don't need to be grouped together to make an impact. Regardless, there was a sense of history in the making throughout -- and having Jennifer Hudson on hand as host and entertainer was a touch of genius. Her rousing rendition of "Respect" -- complete with audience participation -- was simply sensational. 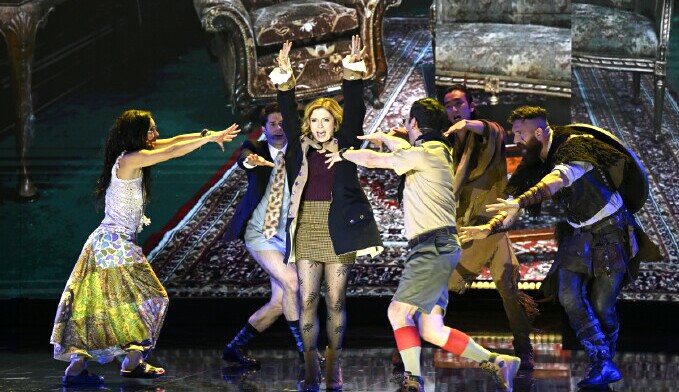 Credit where it's due:Paramountgave us an Upfront Week presentation that was significantly better than last year's effort. But it wasn't Best in Class like the many unforgettable Upfront Week events that CBS' sales, marketing and publicity teams used to produce in the same venue -- the magnificent Carnegie Hall. Maybe you had to be there. (As noted, I wasn't.) It was a clever idea to promise a fast-moving show that would be over in (about) one hour (with the iconic stopwatch from 60 Minutes periodically appearing on screen to move things along). The production number by cast members of the freshman hit Ghosts (my pick for the top show of 2021) was great fun (photo above). There was no shortage of big stars on stage (including Sylvester Stallone, Tim McGraw, Faith Hill, Jessica Chastain, Kevin Costner, Michael Shannon, Patrick Stewart, Wayne Brady, Stephen Colbert, Drew Barrymore and James Corden). And the new CBS fall schedule was prominently showcased! But I was somewhat underwhelmed by it all. Still, the week was all about streaming, and I will admit that as of late I am watching ad-supported Paramount+ more than any of the others, so something good is happening there.

As I noted up top, The CW really came through at the end. Comparing it to the others may not be fair, as it was focused on a single entity rather than a massive mix of platforms and services. But charging up attendees (at home and in-person) at the end of a long week is no small achievement. The CW opened with what turned out to be the Performance of the Week -- the legendary Stevie Wonder performing "Superstition" -- and segued into a parade of popular young stars introducing new and returning shows. (Having former Supernatural stars Jared Padalecki, Jensen Ackles and Misha Collins reunited on stage promoting four new shows between them and comically pitching a few more to CW Chairman and CEO Mark Pedowitz made the morning memorable all on its own.) When the event was over I experienced something I hadn't felt all week … the once-familiar feeling that I couldn't wait to sample a network's new shows and dive right into the television season to come. It was great ending to yet another whirlwind week.