Hulu at TCA -- Hillary Clinton on Voting, the Election, the Media and More 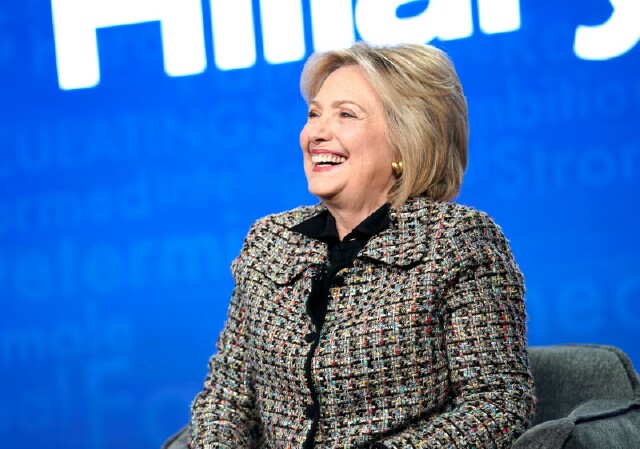 Pasadena, CA -- Gotta hand it to Hulu.  Dozens of networks and streamers brought all kinds of interesting people to the Winter 2020 Television Critics Association tour during the last two weeks, but Hulu shot to the top with the most impressive panelist of all -- Hillary Rodham Clinton.  After days of co-existing with her Secret Service detail as it prepped the Langham Pasadena Hotel for her arrival, critics filled the ballroom first thing Friday morning, eager to ask her questions and hear what she had to say about her upcoming four-hour documentary Hillary.  She was joined by director and executive producer Nanette Burstein.

The first question asked was the one on everyone’s minds:  Why did she agree to do this documentary, which reveals an awful lot about her public and private lives, from scandals and successes to wins and losses?

“There was nothing off limits,” Secretary Clinton replied.  “This did not start out as the film it ended up being.   It really started out as [more of] a campaign documentary because we had about 1,700 hours of behind-the-scenes footage, some of which is in the movie.”

An observation from Burstein changed all that.  “Nanette said, ‘Look, this is a bigger story,’” Clinton recalled.  “'It needs to be told.  It’s part of the arc of women’s history, advancement, choices that are made.’  I’m not running for anything.  I’m not in office.  So I said, ‘Sure, why don’t we give it a try?’  And off we went.”

Clinton is, of course, a polarizing individual, and the documentary doesn’t shy away from that.  One critic wanted to know if she came through the making of Hillary with any new insights into her own persona.

“I did around 35 hours of interviewing with Nanette, and really she picked up on [something] early on,” Clinton noted.  “I became a kind of Rorschach Test for women and women’s roles as soon as I burst onto the public scene when Bill was running for president.  I had lived more than 40 years before that, and I had no real understanding of what it meant to be thrust into the highest, brightest platform and try to live your life and go along with what you’d always done.  For example, when Bill asked me to lead our efforts on universal healthcare, it seemed pretty standard to me because I had done similar things in Arkansas on education.  Little did I know that it would create the most extraordinary backlash that the First Lady would be involved in trying to make sure everybody had quality, affordable healthcare in our country.  There’s a scene in the movie, which I had forgotten until Nanette dug it up, of me being burned in effigy for wanting healthcare.  Part of it was the timing of when I came on the national scene, the fact that I was the first First Lady of my generation and had been working ever since I was a young woman in the professional workforce.  I think it was more rooted in the time we were in and the kind of challenging impression that people had of me.”

“The reason why I wanted to expand this and tell her life story is that I felt it was so remarkably emblematic of our history over the last 40 years, particularly when it comes to women’s rights,” Burstein added.  “I also thought it was important to explain partisan politics.  Once Secretary Clinton entered the national stage, you really see how it [went] from that administration to today where it’s just become more extreme.  More than anything, I wanted people to understand that this is a historical figure who is incredibly polarizing and why.  When you actually get to know her and really understand the intimate moments of her life, you realize how misguided we can be in the way that we understand history and media.  That is the beauty of documentary filmmaking … you get to know the personal and intimate details, and that sort of washes all of this other stuff away.”

Not surprisingly, Clinton was asked about the upcoming election and whether or not voters will learn anything from the doc that will help them in making decisions.

“Actually, by the time this [is telecast, we'll] be right in the thick of what’s called Super Tuesday, so we’ll have the first four contests behind us,” she said.  “Maybe by that time the field will have clarified, and we’ll have a better idea who’s likely to end up with enough delegates to be the nominee.   I say ‘we,’ because that’s the side that I’m on.  I am on the side of an inclusive, generous, open-hearted country that faces up to the future and tries to bring people together to make difficult choices, of which we have many facing us.  We’re in a real struggle with a form of politics that is incredibly negative, exclusive and mean-spirited.  It’s going to be up to every voter, not only people who vote in Democratic primaries, to recognize this is no ordinary time.  This is an election that will have a profound impact.  Take your vote seriously, and for the Democratic voters, try to vote for the person you think is most likely to win because at the end of the day, that is what will matter.

“You all are in the media, you cover it, you are part of it,” she continued.  “We’ve got to somehow understand that you can’t make good decisions in a democracy if we can’t even agree on basic facts.  If we can’t have some understanding of what the evidence is on which we base our decision-making.  Even though the media has a great role in transporting us and challenging us and taking us out of our everyday reality, there does need to be a kind of base reality that people can tune into and feel they can rely on.

“The final thing I would say is we’ve got to figure out how to have a more constructive relationship with social media.  I hope that everybody knows they have a stake in the kind of future we should build together, does speak out, does use whatever platform they have to say, ‘Wait a minute.’  You can disagree with the facts, but there are facts.  You can choose not to vaccinate your children, but there are facts.  You can choose not to believe in climate change, but there are facts.  Somehow, we’ve got to shoulder that responsibility, not only at the political leadership level, but literally at the citizen, activist, concerned human being level.”

Asked what she found most humbling about the experience of making Hillary, Clinton replied, “There were a lot of humbling moments.  One was the recognition that I have been often, in my view, obviously, mischaracterized, misperceived, and I have to bear a lot of the responsibility for that.  That whatever the combination of reasons might be, I certainly didn’t do a good enough job to break through a lot of the perceptions that were out there.  It was quite common for people who knew me, who worked with me, worked for me, were colleagues of all sorts, to shake their heads at the way I was portrayed.  I would just kind of blow it off, brush it off, and not think about it.  I’m not any different than I was, but perhaps I could have and should have found ways to better present myself or deal with some of the misperceptions that were out there.

“I was constantly being surprised how things that I said that I did not think were that far out of the ordinary were taken," she continued.  "I think that did cause me to get even more cautious and more careful and more guarded.   It was like, ‘Oh gosh, if I say anything, it’s going to be misinterpreted.’  So, it became a kind of vicious cycle, unfortunately.  I looked at this film … and thought, ‘Wow.  I wish that I could’ve figured out a better way to convey that.’  But I also know that I was this lightning rod and I was somebody who people were quick to judge, often having nothing to do with me but with the times and with the attitudes about women.  All of that was tied up together.  It was complicated.

“Look, it’s not a surprise to any of us that [much of] the rest of the world is joyfully celebrating our divisiveness and our difficulties because it plays into their hands," Clinton said in conclusion.  "There are a number of such countries and leaders out there who could not be happier with what’s happening in the United States under this leadership.  And then there are our friends, our allies, our sympathetic watchers who know that without the United States kind of being the bulwark against all sorts of threats, that they themselves are more endangered ... and the whole question about how we keep Western democracy going, even if it needs to be reformed as it does.  So, I think there’s a deep level of concern.  I was in London a few weeks ago [doing promotion for] a book that my daughter and I had written.  Every question, everywhere I went was, ‘What’s gonna happen in the United States?  What are you going to do?  What can we expect next?”  It is a really fraught time right now.  I anticipate there will be a lot of questions about [all of] that that will spring off of the film itself.”