By Simon Applebaum May 07, 2019 Upfronts/NewFronts Archives 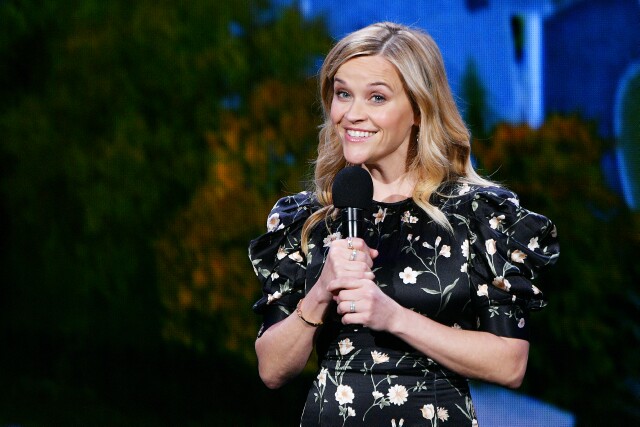 A few months ago, Walt Disney Chief Executive Officer, Bob Iger, promised investors that when his company acquired majority control of Hulu (thanks to the acquisition of most 20th Century Fox media assets) they could anticipate a greater assortment of first-run content coming quickly to that service.  Hulu demonstrated just how quickly last Wednesday morning at its NewFront event, taking place a few weeks after Disney sealed its Fox transaction.

Venue: Hulu Theater at Madison Square Garden, with a “Rise and Shine TV Fans” electronic sign welcoming attendees above the escalator entrance.  After picking up breakfast in the lobby, visitors walked into a black-lit space with giant screen center stage and quick videos on either side of people from various Hulu attractions -- real and animated -- dancing and grooving, from Dancing with the Stars to The Simpsons.  Even George Clooney could be seen bouncing his head up and down.  All this as a live DJ (stage left) played song after song (and at one point, invited the crowd to join in some verses of the classic Sugarhill Gang hip-hop standard, “Rapper’s Delight." 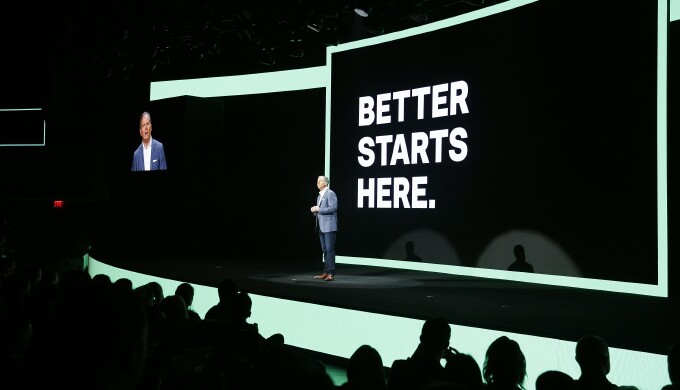 Presentation:  From the get-go, Hulu executives made clear their collective intention to diversify both the amount and range of original programming in the months ahead.  “Better starts here,” declared Chief Executive Officer Randy Freer (pictured above).  “TV is no longer driven by gatekeepers -- it’s driven by consumers.  We want to offer more programming from the most captivating storytellers.”  When new programming initiatives were not front and center, ways to improve consumer relationships with advertising were beginning with a promise to keep ad breaks at 90 seconds or less. “We’re looking to [bring on] a viewer-first advertising experience,” noted Peter Naylor, Hulu’s Senior Vice President of Sales, suggesting that by 2022, interactive and other non-traditional ad formats will account for half of his venture’s ad revenues.  (Hulu pulled in $1.5 billion in ad sales last year.) 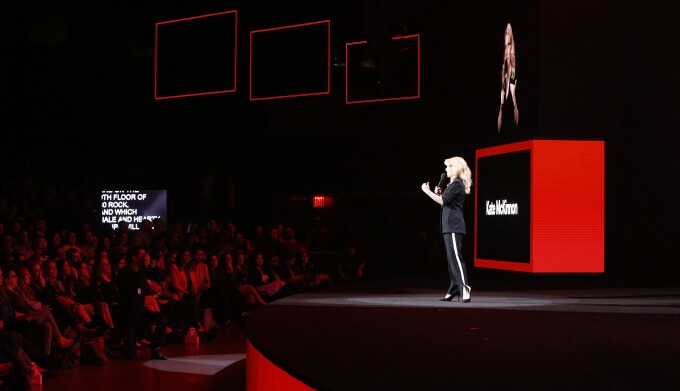 News:  Plenty with respect to both content and advertising.  Disney’s Marvel unit will launch Ghost Rider and Helstrom live-action series next year, joining current hit Marvel’s Runaways and a quartet of new adult animation series.  Nicole Kidman will co-produce and star in Nine Perfect Strangers, adapted from the Liane Moriarty novel and involving talent from HBO’s Big Little Lies miniseries.  Fox Searchlight’s year-old TV unit will produce The Dropout, a limited series starring Kate McKinnon (pictured above) as Elizabeth Holmes, controversial founder of the health rechnology company Theranos.  Other new scripted projects include Reprisal and The Great.  Separately, Vox Media will be involved in a series of food and lifestyle series in association with Chrissy Teigen and popular chef, David Chang.  Both Teigen and Chang will co-host cooking entry, Family Style.  In advertising developments, Hulu will introduce interactive ad screens where consumers can get more information on a featured product, accept discount offers or order goods by remote control.  Another unique ad play, where ads are directed at binge viewers and placed in those shows they binge most, will debut this fall. 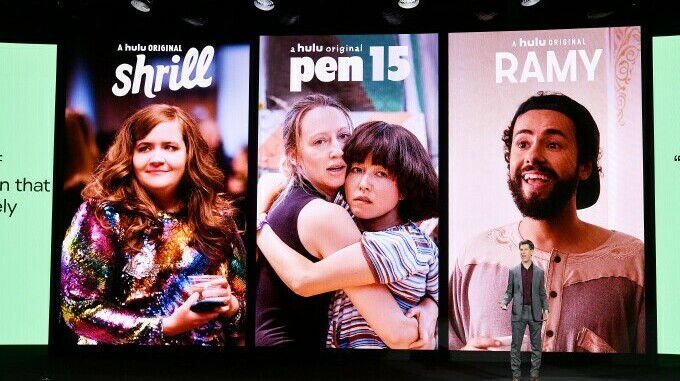 Host:  Senior Vice President of Originals Craig Erwich (pictured on stage above) and Peter Naylor carried most of the presentation in an engaging manner.  Also, a nice contribution from Chief Data Officer Jaya Kolhatkar.

Star Time:  Yes, George Clooney showed up in person to highlight the premiere of his Catch-22 miniseries later this month.  (He is pictured below with co-stars Christopher Abbott and Kyle Chandler.)  He was joined by a parade of stars and personalities from other first-run attractions, including Mindy Kaling, Margot Robbie, Reese Witherspoon (pictured at top) on behlaf of her project Little Fires Everywhere and Ramy Youssef (from the acclaimed new comedy, Ramy).  McKinnon closed the event with a funny mini-monologue about the opportunity to portray Theranos’ disgraced leader -- and having more time than a Saturday Night Live sketch to play her. 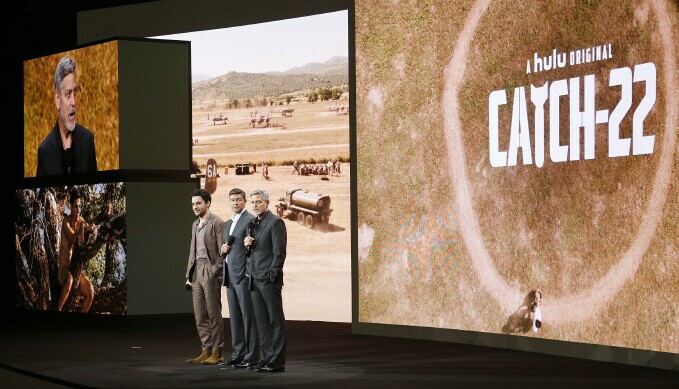 Data Insights:  Twenty-million viewers of the service are cord-cutters or cord-nevers; nearly 1.5 billion hours of adult animation were viewed last year, a 40 percent bump from 2017; about half of all ad-supported hours watched are binged.

Innovative Opportunity:  Participation in “pause advertising,” where commercials pop-up when a viewer pauses the action on-screen.  A successful trial of the concept earlier this year will lead to a rollout late summer or fall.

Cuisine: Slight improvement in the standard MSG Upfront breakfast offering.  You had a choice of coffee, orange juice, water and yogurt drinks, plus plain or ham and cheese croissants.  Does MSG have a beef over serving hot or iced tea?  Just asking.

Key Takeaway:  With more Disney-provided resources to work with, there’s a stockpile of high-profile, new scripted and unscripted series in the pipeline.  Along the way, the ad community will learn if -- and if so, how quickly -- viewers adapt to an interactive commercial/merchandising landscape.