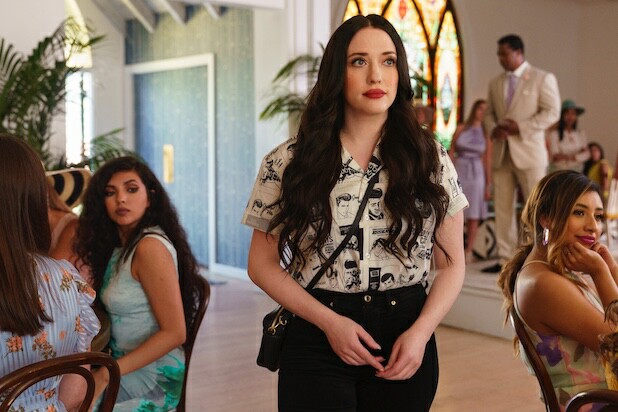 Hulu’s comedy Dollface,  created by Jordan Weiss, is a hilarious and down-to-earth look at the post break-up life of Jules, a woman who neglected all her female friends during her five-year relationship, and now needs them more than ever. Starring Kat Dennings (pictured at top) as Jules, and Brenda Song, Shay Mitchell and Esther Povitsky as her friends Madison, Stella, and Izzy, respectively, this series is a gem; one that pulls elements from over-the-top comedies like Man Seeking Woman  (its spirit animal in my opinion), yet still has the kind of quirky grounded-ness that defines sweet sitcoms like New Girl.  I started this show intending to watch just a couple of episodes.  I ended up bingeing the entire season.  While I impatiently wait for the next season, let’s talk about why you should watch this one.

First, let’s give credit where credit’s due.  Dollface is not a carbon copy of anything, butlike all great work, it does pull from some stuff.  The connection I made to Man Seeking Woman was hard to ignore, given the literal nature of some of the obviously metaphor-based scenarios.

In the first episode, after being dumped by her now-ex boyfriend Jeremy (Connor Hines), Jules ends up at a bus stop.  The bus arrives and the driver is a cat lady.  Literally.  She’s a lady with a cat’s head where hers should be, and she’s actually credited as “Cat Lady.”  Turns out Cat Lady’s a sort of guide who explains to Jules where she lies on this road of life, and where she could end up, as well as visually representing the very literal version of what she could end up being if she messes up: A cat lady.

Things like this happen on the regular.  Jules orders a male stripper to her home for a bridal shower, but it ends before he gets there, causing him to arrive during a dinner party she had scheduled for after that.  To try and get him on the same page before things go “off the rails,” she pulls him into another room to talk.  That room ends up being the interior of an old-timey train car that happens to be hurdling towards a broken track at the end of a cliff.  The train is literally about to go off the rails.

Scenes like this are why the connection to MSW seemed so obvious at first; this particular move was basically that show’s whole thing.  The difference with Dollface is the time spent in that space.  The whole show is pretty low stakes -- in that no one’s ever in mortal danger or anything like that -- so one could argue that too much time spent in this imaginary emotional playground may undercut the true gravity of these interpersonal situations, which are all rooted in reality.  Fortunately for us, this isn’t a problem in Dollface.  We get just enough of these visualizations to make clear the point of whatever episode they happen in, and maybe to simultaneously hammer a punch line home, then we move on.

From there, what happens is, as I’ve said, pretty grounded.  This show is about Jules, her insecurities, and her friends, and the appropriate amount of time is spent fleshing out these women out and their issues.  Besides the VFX and the writing -- which is one part emotional intelligence, one part social awareness and two parts comedy gold -- the rest of show sits squarely on the shoulders of its four stars.

Kat Dennings is great at being her own straight man (a skill she honed on CBS’ long-running 2 Broke Girls), while Esther Povitsky is perfect as the adorably quirky Izzy.  Brenda Song as Madison, that one friend who seems to have it all together, and Shay Mitchell as Stella, that one friend who doesn’t seem to have a care in the world, perfectly complement their castmates.  In fact, they all give strong performances, and their four-way chemistry (which evokes that of Sarah Jessica Parker and her co-stars on Sex and the City) works great on screen.

Honestly, even without the surprisingly good VFX shots, or its creative take on visual interpretation, Dollface would still be a solid comedy.  I flew through the ten available episodes and barely felt it, which is a telltale sign of greatness if you ask me.  I was roped in, and when it was over, I wanted more.  I rooted for Jules, and continue to do so, because the journey she’s on isn’t just one that women deal with, but one that many people go on all the time.  I’ve been both her and Jeremy in my own life, and even if I hadn’t, I know what it is to let friendships lapse.

Executive produced by Margot Robbie (as well as Kat Dennings and series creator Jordan Weiss, among others), Dollface is above all refreshing in a television landscape overwhelmed with arch earnestness.  These women are funny as hell, the narrative is sound, and this series takes full advantage of being in its element.  Hopefully, Hulu, one day I’ll be writing about Dollface’s emotional series finale after seven or so hilarious and beautiful seasons.