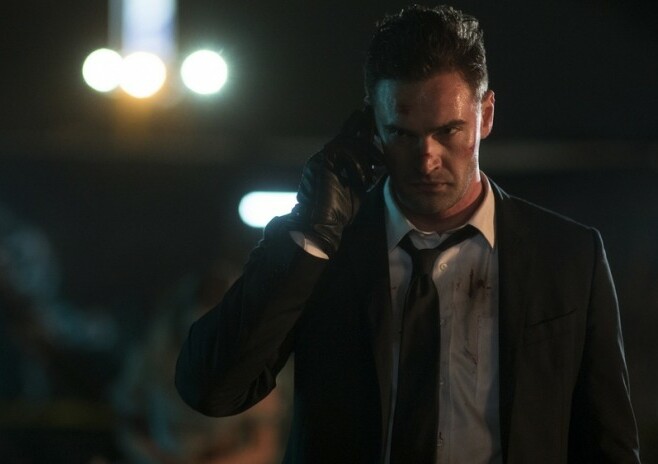 Into the Dark, Hulu’s new original horror anthology series, premiered its first episode last month, and boy it is a doozy.  At ninety minutes, this “episode” was more of a movie than anything else, but as someone who tends to lean towards comedy I’ve got to say, I wasn’t mad at it.  It was stylish, had exactly the right number of familiar faces in it, and brought up some interesting observations about society and human nature. Like any horror movie, it also had its fair share of characters doing the dumbest things possible, but given how real life’s been lately, I’d say it was pretty accurate in that respect.

The Body (Into the Dark’s first movie-sode) opens at the scene of a crime; a murder carried out by a well-dressed hitman named Wilkes (Tom Bateman).  He’s given the task of transporting the body to a different location within a certain amount of time. His plan?  Drag the plastic-wrapped corpse through the street, of course.  After all, it is Halloween.  No one will suspect a thing.  Naturally, this works … until it doesn’t.

Besides the debatably predictable plot, The Body has a lot going for it.  In some respects, it’s a very smart movie.  Its lead character shares some rather eloquent yet macabre opinions about the frivolity of placing meaning on any one life, suggesting instead that no lives matter, and that coming to that realization is akin to true freedom/power/agency.

His devil-may-care attitude towards life seems to flip all the psycho switches in the brain of Maggie (Rebecca Rittenhouse), his supposed love interest, who decides she’ll have what he’s having.  Murder, that is.  This is where the film/episode gets interesting.  At first I was thinking this would be a crazy adventure that turned one semi-likable bad guy into a duo of semi-likable bad guys.  Maybe we’d watch this guy, you know, the one who gave the “why I love murder” monologue a few minutes ago, find a reason to care about someone other than himself. Maybe one of his intended victims would get the upper hand and rob him of what was probably his final chance at humanity, an act that pushes him even further past the point of no return.  Maybe he would sacrifice himself for this supposed love interest.  Maybe she dies anyway, meaning it was all in vain. Good Lord, that would’ve been great.  That didn’t happen, though.

Instead, what we got, which was funny, shot well, and had pretty decent gore for something that’s not calling itself a movie, started to show its hand after a while.  There weren’t that many huge plot twists, -- hell, I already mentioned one of them -– and after those it was pretty easy to see where things were going to go.  That isn’t to say that it makes this production any more or less guilty of that crime than any other made-for-TV horror flick, but this is Hulu we’re talking about.  I was expecting tothink I knew what was going to happen and then have those expectations overturned.

On the other hand, if making a popcorn flick is what Paul Davis (the director of this incarnation and the original short film it’s based on) was aiming for, then he nailed it.  It was entertaining, and not overtly dumb.  It had opinions, but not agendas, and it did take the time to subvert various horror movie tropes.  It was suspenseful enough, but definitely wasn’t going to give me any nightmares, and, also to its credit, it featured a couple of actors from shows that I already loved.  Ray Santiago from Ash vs Evil Dead played a dude named Jack, and the aforementioned Maggie was played by Rebecca Rittenhouse, previously of The Mindy Project.  Both put on great performances, with Rittenhouse earning an extra tip of the cap for being able to say a ton with a simple look.  Half of her performance was nuanced stares for cryin’ out loud.

The actors that I wasn’t familiar with -– namely Bateman (Wilkes), Aurora Perrineau (Dorothy) and David Hull (Alan) -– all did amazing jobs playing what were arguably pretty ridiculous people.  Then again, most people are ridiculous nowadays, so any gripes I may have are with the characters themselves, not the actors.

Now, color me nerdy or whatever, but I feel like one the biggest issues here is the lack of answers the story provides.  I don’t mean the answering of questions integral to the main plot, I mean the questions that are main plot-adjacent.  If this were Black Mirror, I’d know that on some level all of these stories take place in the same universe.  Granted, I’ve only seen one story, but the episode length and huge gap between releases instills kind of a one-off movie vibe.  So, will any of these characters come back?  This one felt pretty grounded … will the next one get supernatural?  Will it even be in the same time period?  If nothing’s connected, why does the last episode matter?

I’m going to lightly spoil the ending.  Out of this gumbo made of Halloween costumes, real murderers, throwaway deaths and supposed pump fakes comes what might be my biggest issue: I didn’t like who survived.  I mean, I’d watch more of them, but will I even see more of them (see: previous paragraph)?  I kind of want to.  I had better.  Either way, in the meantime, I’ll keep showing this one ninety-minute episode to all my friends that haven’t seen it yet.  Even if it isn’t that scary, at least we can laugh at it together.