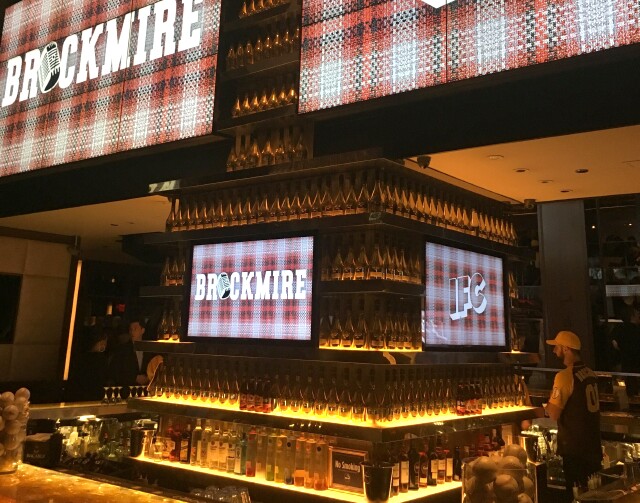 IFC’s Brockmire -- a seemingly sad story about a washed-up, alcohol-abusing, former major league play-by-play announcer attempting to rebound from a personal crisis and its shattering aftermath by calling games for an unremarkable minor league team at a rundown small town stadium – happens to be the best new comedy of 2017 to date.  It is also the funniest; which isn’t always the case where great contemporary comedies are concerned.  I can’t shake the feeling that my opinion is not going to change during the next nine months. In fact, I feel as strongly about Brockmire as I do about FX’s Feud, which I have already designated Program of the Year.

Were it not for the fact that two television stars of a certain stature – Hank Azaria and Amanda Peet – head its cast, Brockmire would be a thoroughly modest production in every way.  That’s not to detract from their performances or the overall effectiveness of the show, which finds moments of personal achievement and inspiring grace notes in the life of a man who was once considered one of the greats in his field but – thanks to a booze-fueled public meltdown preserved forever on the Internet – is now off the scene, except as an object of online ridicule.  Azaria has had many terrific roles in his career, but his layered portrayal of Jim Brockmire looks to be a career best.  (He first played the character back in 2010 in an episode of the Funny or Die series Gamechangers.) The same can be said for Amanda Peet as Julia “Jules” James, the strong-willed and good-humored (and also somewhat damaged) owner of both the Morristown Frackers – the team Brockmire now serves as announcer for -- and, conveniently, a popular local bar known as Rusty’s (a clever name, given that Morristown is located within the increasingly influential American “rust belt,” a region that recently flexed its collective muscles and … well, we all know how that turned out).

It is Jules who convinces Brockmire to come to fictional and failing Morristown, PA and begin to put his life back together by doing what he still loves best -- calling play-by-play. She offers unconditional personal, professional and emotional support along the way. Her goal is not simply to revitalize the Frackers but to restore the entire town itself. 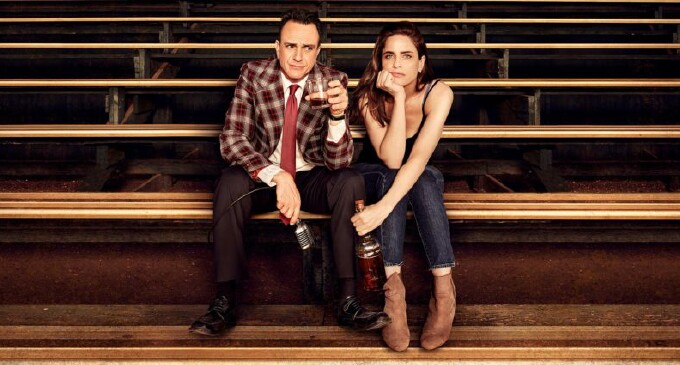 There are grand themes at play here – pride, redemption, forgiveness, self-doubt, self-loathing, self-respect and the power of love, friendship and community.  Oh, and the unrelenting menace of technology, which ensures that, if caught on video, the lowest and most embarrassing moments of peoples’ lives will be preserved on the Internet for the entertainment of millions for millennia to come.  That’s enough dramatic weight to crush the funny out of a comedy of any kind. But not here.  Some of the credit goes to the profoundly effective writing by Joel Church-Cooper and the equally fine direction by Tim Kirkby, who are so detailed in their storytelling and its execution it’s as if they have lived in Morristown (or one of the hundreds of American towns very much like it) for most of their lives.  Consider Brockmire’s own description of such places:  “They are scraped out husks … victims of the capitalism that made a lie out of the American Dream.”

Church-Cooper and Kirkby seem to have a genuine understanding and a sincere affection for folks who live smallish lives in tiny places – for hard-working Americans who reap little or no rewards throughout years of hard work but carry on anyway and manage to enjoy life’s simplest pleasures.  Small town sports are everything to many of these folks, something that hasn’t been explored on television since the modern classic Friday Night Lights ended its run on NBC and DirecTV.

As did so many of the sublime actors who made the characters in Lights so painfully yet rewardingly real, Azaria and Peet work wonders with the 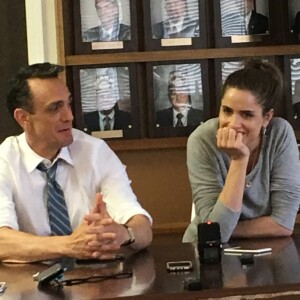 material they are given here, raises Brockmire far above the niche appeal that the original programming on IFC is known for and quite possibly into the rarefied space reserved for mainstream hits of uncommon high quality.  It will be a crime if the two are not acknowledged, along with the show, throughout the next TV awards season. Tyrel Jackson Williams is similarly sublime in a disarmingly charming performance as an eager young intern thrilled to be working for the Frackers.  The show wouldn’t be the same without him.

IFC did many extremely smart things in promoting this show.  They began to build buzz for it over a year ago at the network’s intimate 2016 Upfront press lunch in New York City (where the recently renewed horror comedy Stan Against Evilwas also launched, and the second season of critical favorite Documentary Now! was first promoted). That was followed by a junket in Atlanta, where the series was filmed. (The bottom photo of Azaria and Peet was taken at an on-location press conference last July at the Yaarab Shrine Temple on the outskirts of the city.) Then came the wisest move of all – sending critics a DVD screener with all eight episodes from the show’s first season, allowing them to not merely be tantalized by its terrific pilot but to binge their way through the rest, becoming happily obsessed along the way.

I find it interesting and well worth noting that the buzz for Brockmire has been building throughout broadcast’s pilot season, when almost every hour brings with it news of another big-budget, lavishly produced drama or comedy that its network and studio envisions as the next big thing.  Most of those will ultimately fall into the category of the next big bust.  Maybe they’re just trying too hard.  The entire eight-episode first season of Brockmire was shot with humbling efficiency in just 22 days in and around Atlanta at a budget that was probably less than the catering tab for some of those “bigger” shows.

In television as in baseball – and most other things – bigger is not better.  This show provides incontrovertible proof.  Here’s hoping IFC continues to “Keep It Brockmire” for years to come.