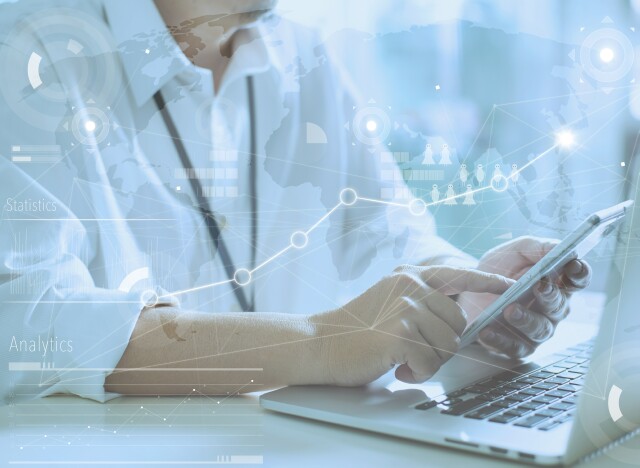 You may be wondering why I left demographics out of the title. At TRA, we found that demographics were in most cases only trivially predictive of purchase, as in the slide below. 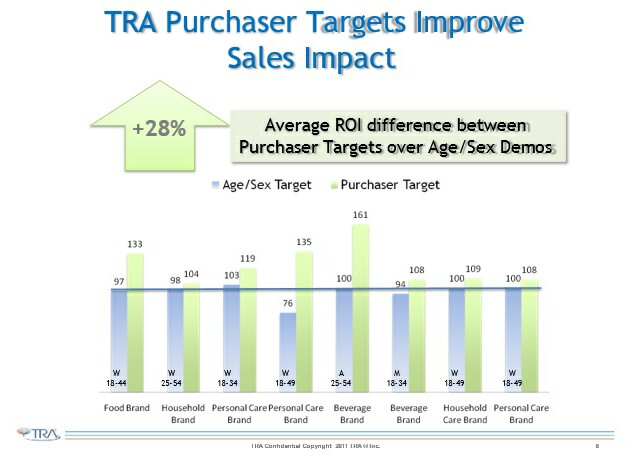 As you can see, in the best case, the demo target only was 3% better than random in ROAS. In most cases it was pretty close to 100 index (i.e., random). In the worst case, the demo target was 24% worse than random in ROAS. These were only the first cases as of 2011. By the time I left in 2014, there were thousands of like cases revealing that demography is a very poor predictor of ROI.

Demographics are not quite the worst targets. The worst are lookalikes where the fusion hooks were demographics. Even if the seed sample is the right type of purchasers ("right type" explained below), lookaliking using demographics to predict which IDs are likely to be good prospects is only slightly better than just targeting demographics. If you have to target demographics, it's better to give everyone a weight of "targetness" rather than exclude the lowest current usage demos.

But you don't have to target demographics. Today there is a wealth of more advanced targeting information available which can be used for more predictive forms of targeting. Even in a world in which ID based targeting becomes limited to a portion of the population, content-based targeting can still be used with advanced targets. For example, in the prior postit was shown that lookaliking based on the ID's previous content consumption provides much better results than demographic targeting. The programs and websites used by a person are a far better predictor of that person's true interests than their demographics.

Two theories of targeting, one very well known, the other known only to cognoscenti, are the basis of debates among advertising intelligentsia. This debate has been going on for 20 years. I intend to resolve it in this column.

Everyone knows Byron Sharp's famous dictum – echoing Peter Drucker but using data – that a brand can only grow by bringing in new customers.

Very few people know of the Loyalist Principle: targeting one's most profitable customers – the 10% who supply half the brand's annual profits. This was discovered by Larry Light working with Mike Donahue of the 4A's.

On the face of it, the two theories are diametrically opposed. However, they could both be true, and require a balancing act to use both, using each one exactly to the right degree for the situation.

For example, protection of the current profitable core might turn out to be the right strategy for a declining brand, especially if the CEO decides to cut its advertising and promotion budgets. Promotion was a big factor in the Larry Light 4A's study 20+ years ago: Larry pointed out to the client that the profitable loyal customers did not need price incentives. Occasional buyers were thought/found to be the ones who needed price incentives to buy that brand.

Promotion is the most over-used marketing tool, which would show more advanced visitors from another planet just how early we still are in our marketing science development. It's easy to see how the vast size of the promotion (discounting) budget -- typically four times the size of the advertising budget -- could lead a marketer to want to reduce it, which could lead to thinking about giving up on bribing the occasional buyers with promotions.

However, in 2006 there was a discovery which overturns the notion that occasional brand buyers only buy on deal. I made the discovery at TRA. We found that the highest ROAS on advertising always comes from what I called Heavy Swing Purchasers (HSPs). These were category heavy spenders who had purchased your brand 25-75% of the time over the past three years. It was actually not that percentage of the time, but of the dollars spent in the category. This is called Share Of Requirements (SOR).

We looked at the price paid as an indicator of promotion and only a minority of HSP purchases were accounted for by buying on deal. Deal-based buying was a different pattern and we could identify those households and predict what they were going to buy quite easily based on pricing patterns. The deal-based buyers are a segment that cuts across product categories. The HSP phenomenon is orthogonal to the deal-buyer phenomenon.

My explanation for the HSP phenomenon goes back to my days as EVP of Brand Rating Index, the first of the long-questionnaires syndicated services, forerunner to today's MRI/Simmons. (Simmons was doing magazine but not product measurement when BRI began to combine both.) In one multicategory study in which the same sample was interviewed again six months later, I saw that over 80% of the people indicating a different brand as their first choice, as compared to six months earlier, had considered that now-favored brand their second choice six months ago. This taught me that an occasionally purchased brand could be the understudy for that person's next favorite brand.

If advertising is a light tap as Erwin Ephron taught us, that light tap is more likely to succeed in getting you to buy a brand you already do buy from time to time. Versus getting you to change behavior pattern entirely by trying a brand you have never tried before. That's much harder to do without there having been a bad disappointment in their current brand recently.

Leslie Wood at Nielsen NCS a few years later corroborated the HSP finding by using a slightly different version called Category Heavy/Brand Light – households who buy the category heavily and buy the brand only lightly. NCS has compiled its highest learnings at this site.

Former ARF Chief Researcher Joel Rubinson has once again validated HSPs using a slightly different variant he calls (brilliantly) the Movable Middle, which I believe is a better name. His research suggests that the optimal range is 20%-80% of SOR to use in targeting.

Alas, I set out to cover more than can be condensed into one post. How do competition and motivations fit into targeting considerations? Is there more to be learned from purchase histories that relate to targeting? Yes.

I have much more to say about this subject here.