In my previous post I called attention to the traditional media agency contract which often includes guarantees on sex/age GRP/impressions and reach, all at the client's budget level -- and I pointed out that this contractual guarantee prevents the agency from making buys that have the greatest ROI and brand equity effects.  For example, TRA proved that sex/age is typically not predictive of sales effects (see graph below) and showed that using purchaser targeting in all-rotation buying averaged a mere +4% ROI lift vs. +28% for buys mixing fixed program position buying with rotations. 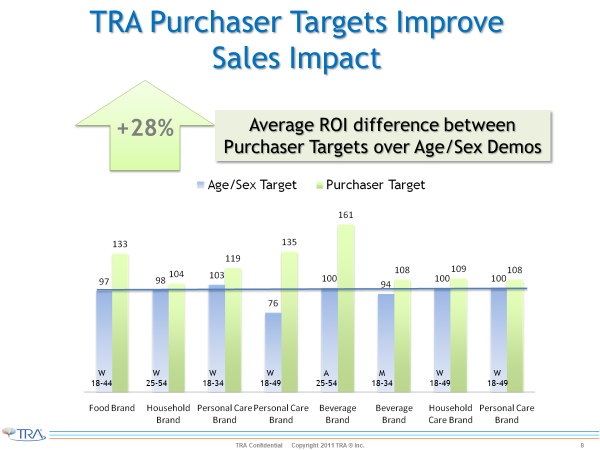 Therefore, the key question for the advertiser is how to optimize performance by changing the current contracts to incentivize buys that will maximize long- and short-term ROI.  This can be looked at on two levels: the advertiser and the brand.  Many advertisers have multiple brands.  Each brand tends to have targets different from the other brands within a corporate stable, especially as advanced purchaser targeting is implemented.

We define "advanced purchaser targeting" as the selection of directly activatable media targets based on the combination of (a) a person's/home's past purchase history for the category/subcategory/brand, (b) a measure of elasticity (i.e. sales responsiveness) based on the interaction between the person/home and the specific ad and (c) a process to avoid excessively small targets which do not contribute enough to overall sales.

In my own work experience, BRI and much later TRA found that advertising has most of its lift effect on people who have bought a brand before but not loyally.  At TRA I dubbed these Heavy Swing Purchasers (HSPs).  We found that targeting such people/homes instead of a sex/age group not only lifted the impressions against HSPs but also against all other category purchasers, avoiding the problem of setting excessively small targets.

This means that for contractual purposes an advertiser can specify the targets desired and make the guarantees of GRP and reach applicable to the new targets, not to the old targets.  This is really a very small contract change and ought not to be daunting at all.

Doing so would give agencies permission to buy fixed program position.  That's because when you buy fixed program position you can achieve HSP or any other purchaser type densities in the audience that are double the average, making it possible to more cost efficiently attain the guaranteed GRP/reach goals in the contract.  Even though a premium will have been paid for fixed program position, only those programs in which the purchaser gain is greater than the premium will be bought.  The agency making the guarantee will see to it, because the contract has perfectly aligned the interests of the agency and the advertiser.

Once an agency has been contractually freed to buy fixed program position, it is a simple matter to consider the content of the program as it is or is not resonant with the content of the ad, as well as purchaser targeting, simultaneously in a single table, and to optimize the buy accordingly for reach as well as CPM/GRP.

Caution:  The idea of combining sex/age with purchaser criteria will tend to not have the desired effect.  If a brand appeals to a single gender it's safe to combine gender alone with purchaser targeting.  However, once sex/age is used, it tends to dominate the equation, partly out of inertia (agency perception that nothing has really changed) and partly because of the law of large numbers (sex/age targets are typically larger than purchaser targets, and that's why they are much more diluted in terms of ROI).

In 2009 P&G announced its new Brand Agency Leader model (BAL) which made sweeping changes, one of which was a potential annual bonus for agencies based on sales revenues and market share changes on their watch, where the size of the bonus could potentially amount to as much as 10% more than the pre-agreed compensation.  In the past, other industry leaders such as Page Thompson at Omnicom and Huw Griffiths at Interpublic have disclosed that ROI-reflective bonus deals will create win/win outcomes for clients and agencies, and everyone who has worked under such deals indicates that they are good business.  They also incent creative agencies; therefore I'm adding this to my recommendation so that the advertiser can incent all types of agencies with both the "refined guarantee" stick and the "sales bonus" carrot.  Widespread adoption of these simple proven principles will generate a renaissance of value in the advertising industry that will lift all ships.

Photo credit: William Iven/Unsplash
Click the social buttons above or below to share this story with your friends and colleagues.