Inside the Audio Industry: A Conversation with Gary Krantz 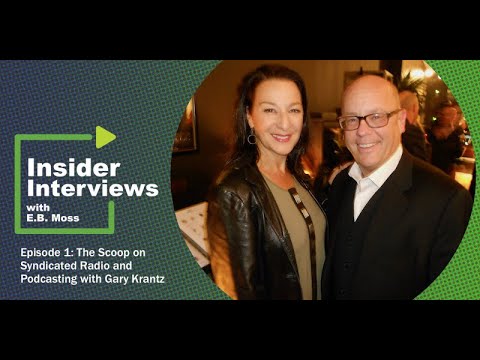 The ante has been upped on audio as a companion as we seek out more comforts while homebound due to coronavirus (COVID-19). Radio personalities, and now podcasters, have long been perceived as our "friends," with advertisers benefitting from that alignment through trust and companionship. With more media consumption projected during our current crisis, I thought it was a fitting time to speak with someone who has spent an entire career in audio — from being on-air in college to running major radio networks to delivering multiplatform content aligned with high-wattage personalities: Gary Krantz, chief executive officer of Krantz Media Group LLC (KMG).

Proof positive? One of the last times I hung out with Gary was alongside classic rock legends Alice Cooper, Jimmy Page, and Brian May, in London. But I digress.

Krantz has taken entertainment companies and brands from conventional broadcast to digital business models and helped fuel the radio careers of such notable figures as Carson Daly, Ryan Seacrest, and Rachel Maddow. In a conversation for Insider Interviewspodcast, he explains how he leveraged his "stick-to-it-iveness" to go from unpaid "gopher" to helping run MJI Broadcasting (later acquired by iHeart, where he became executive vice president of its Premiere division), then becoming president of Air America to chief digital media officer at Westwood One. We learn how his gut instincts led him to syndicate some of the biggest names and events on-air and, ultimately, landed him in the utopian landscape of podcasting.

The conversation is toplined here and edited for clarity. Please subscribe and listen in its entirety on Apple Podcasts, Stitcher, Google Podcasts, and TuneIn.

E.B. Moss: Gary, quite simply, how did you get started?

Krantz: I got the sledgehammer-over-the-head moment of what I wanted to do when I walked into the college radio station and, boom, there it was.... I did a blues radio show and some other interesting people were on the air there, too: Brad Paul, who did a folk show, went on to be the head of promotion for Rounder Records, and a guy named Doug Herzog, who loved reggae, went on with some other college pals to start MTV.

In those days, you didn't have this consolidation. But every week, this vinyl disc started coming in called the King Biscuit Flower Hour, which was before real format radio. It would be a live recording of, say, the Allman Brothers from the Fox Theater in Atlanta and opened by, like, Bruce Springsteen. And that was my first taste of radio syndication.

Moss: You then went to work for what was then a start-up, MJI?

Krantz: Yes, I became the second employee there, but didn't get paid for the first couple of months. I thought my father was gonna kill me! That company grew into one of the largest independent radio networks in the country. Then, in 1996, all these companies started to consolidate. I became vice president of programming at AMFM Radio Network, which had a platform of 60 rock and 70 country stations.... We bought the rights to American Top 40 with Casey Kasem... and Rockline with Bob Coburn, which all benefited from this new technology called satellite to interview artists.

I got recruited to be president of Air America Radio, and we hired Rachel Maddow; [podcast legend] Mark Marin was my morning man and Al Franken was my afternoon guy. Then I went to Westwood One as chief digital officer at the apex of when you could be a publicly-traded company. We had rights to almost every sports contract for radio, big entertainment archives going back to the seventies, and it was really the beginnings of the [radio business] changing.

Moss: Then you launched KMG?

Krantz: At that time in other media, you started to hear things like "It's not TV, it's HBO" and people were watching television very differently. I thought, "Maybe KMG could be like that — a highly focused company that specializes in best in brand." That happened to coincide with the 30th anniversary of John Lennon's death, and the people who did the last interview with him wanted to do a recollection show. So, it was me at my kitchen table securing the interview rights from Yoko. But it was a hit. That began the company and we continue to be an independent, producing and helping to distribute and monetize content in terrestrial radio, satellite radio, streaming, and podcasts.

Moss: Like the content I mentioned, the Classic Rock Awards — hence how we were hanging out with Jimmy Page.

Krantz: Right! I had learned of an influential classic rock magazine doing an awards show at the Roundhouse in London. There were a hundred tables; Roger Daltrey was at one, Mick Jagger was at another.... Unbelievable. They were syndicating programming and wanted to do these awards from the United States. My gut said yes, so I went to iHeart, which owns 70 classic rock stations, and they became our radio partner. We did the second year in London when a young woman named E.B. Moss found Gibson Guitars as a sponsor, and we got one-on-one interviews with, yes, Jimmy Page and Alice Cooper....

Moss: And, now, you're in podcasting, too?

Krantz: Yes, this is a time of incredible expansion of audio entertainment. So, I created KMG Utopia Studios. We had to unlearn everything we knew about being "within format" and playing the right song or talking too much; we could be free. The downside is, how do you get people to know about [your podcasts] and create enough value where an advertiser could spend some money? I came to the conclusion that you can identify categories and talent that already have a huge following in a particular vertical. So, the first podcast was with a gentleman called Fred Minnick — the foremost bourbon expert in the world — who has a built-in audience and a built-in advertiser base.

Krantz:I think, today, because of the plethora of content out there, you have to have a unique take on it.

Another is with Politicon, which is the Comicon of politics. And Clay Aiken will host a bipartisan panel in front of a live audience each week.

Moss: Tell me about some of the challenges in podcasting today.

Krantz: I think the biggest one is awareness. If you do a deal with iHeartRadio, then you know that audience is going to be there. In this case, you do have the freedom to create anything you want. But in order to get the sponsorships, you need to have the listeners, beyond the exuberance … from brands just wanting to be associated podcasts based on a feeling.

My friend Danny Goldberg wrote a book called Bumping Into Geniuses, which I love. He got that from asking music executive Ahmet Ertegun what his secret to success was. He says, "I bump into geniuses." I think that's a great analogy. You know, I just try to find that genius and then build off of that.