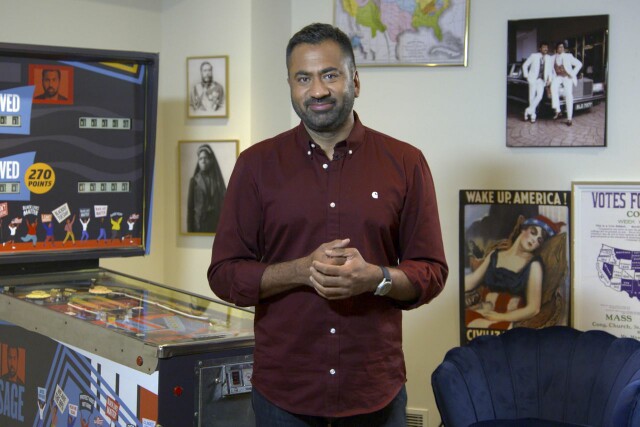 These days I often find that I am learning things I really should’ve been taught in school from less conventional sources (like the internet, or on television). Don’t get me wrong, as much as I absolutely believe school should be the place where kids learn things like what the Tulsa Race Massacre was, or who the Central Park Five were, or what the Voting Rights Act of 1965 was all about, embarrassingly enough, it isn’t -- or at least it wasn’t, not for me, anyway -- and I don’t know that it is for today’s kids, either (see: How Texas Teaches History). What I do know is that I learned about those things in my thirties from platforms like HBO, Netflix and Hulu, and most recently the subject being taught is of the utmost importance: Voting. Well, today’s class is Freeform’s Kal Penn Approves This Message, and whether he realizes it or not, its eponymous host, Kal Penn, may have just inadvertently created 2020’s best teaching aid to date: His show.

Fans of Penn know his filmography. He was in a couple of stoner flicks about White Castle with John Cho, had some guest appearances on shows like New Girl and Big Bang Theory, and he even did a stint on House. Now he hosts a show on Freeform that aims to engage the young masses about socio-political issues. Yes, he did a bunch of cool Hollywood stuff, but his most important role was in the White House. In 2009, during the Obama administration, Penn became the Associate Director of the White House Office of Public Engagement and Intergovernmental Affairs (now called The Office of Public Liaison). Point is, getting to the people is what this dude does, and now his focus is educating the youth in a way that allows them to be actionable in today’s ever-changing societal landscape.

In the first episode of Penn Approves, titled Kal Penn Approves our Democracy, Penn tackled a very specific list of topics that he conveniently laid out at the top of said episode. The topics were Voting Basics, Education, Judicial Nominations, Health Care, Climate Change and Voter Empowerment, all of which he covered in detail by the time the 21-minute program came to an end. Is this a valid substitute for a 45-minute lesson lead by a trained educational professional? Maybe not. But Penn is no slouch credential-wise, and there’s no reason why this episode couldn’t have been shown in say, my P.I.G. (Participation in Government) class in high school (except for the fact that streamers, as well as certain basic cable networks, didn’t even exist yet).

Penn understands the power of education, and its ability to make our lives better, regardless of who we are. “We all have different ideas on how to solve problems,” he said in his first monologue. “But the reality is, we have a heck of a lot more in common with each other than we give ourselves credit for. I got involved in public service because I wanted to the lives of my friends and family to get better. I created this TV show because I want the same for yours.”

Kal Penn Approves plays out like the illegitimate child of shows like The Daily Show and the video essays that make up ninety percent of YouTube’s content (I presume). Having established the topic, Penn will set up his talking points and then knocks them right down with anecdotes, short guest appearances (via Zoom), infographics, and video clips.

Just before each episode’s end, we get great interviews. In episode one it was American labor leader and civil rights activist Delores Huerta, and in the second, titled Kal Penn Approves Education, it was Hillary Clinton. In the third, Kal Penn Approves Judicial Noms, he interviewed with Ohio rap artist YelloPain, writer and performer of the song “My Vote Don’t Count,” which he created after his cousin Desiree Tims, an Ohio congress hopeful, expressed concern that the local youth wasn’t educated enough on issues of government and the importance of politics. Penn’s conversation with Pain was an honest and relatable one, and Pain’s song is, for the first time maybe, a track that’s seriously about politics that I’d actually listen to. Crazy.

Besides the interviews, Daily Show-esque correspondent pieces are a part of the show, like the one done by Penn’s correspondent Moses Storm in the first episode. It was the same flavor as the kind of stuff we get on Full Frontal with Samantha Bee, where the topic at hand is discussed via silly and occasionally obvious lead questions that usually result in answers that support the thesis of whatever topic is being handled. The humor at play is the most familiar aspect of it all, like when Storm wore a blue paper medical gown for his Zoom meeting with a doctor.

The most recent episode, Kal Penn Approves Healthcare, featured correspondent and former CollegeHumor writer Rekha Shankar doing a piece on medical debt and the ways people have had to combat it (which include crowdfunding and the like). Her piece, like the rest of the show, was funny enough to hide the fact that I was learning, which, if you ask me, might be the best way to teach.

The upside to Penn’s new series is how actionable the information being provided is for viewers. For example, in order to make sure that critical details about important topics like voting rules, polling place locations, what’s on the ballot, and candidate policy doesn’t just go in one ear and out the other, that information is posted on the show’s website, kalpennvotingresources.

Fact is, we needed this show to be made, and we need people like Kal. Is it the hippest thing ever to happen on TV? Meh. The topics it covers aren’t fun or cool at all. Civic duty, like anything involving government, is usually seen as inherently boring, especially (stereotypically) to younger people. But KPATMbridges that gap a bit, in a way that makes it feel like middle schools around the country should recognize and try to incorporate. Maybe then, people would actually learn important facts about our country and government in the one place where they’re supposed to learn stuff like that.

Kal Penn Approves This Message is telecast Tuesday at 10:30 on Freeform.