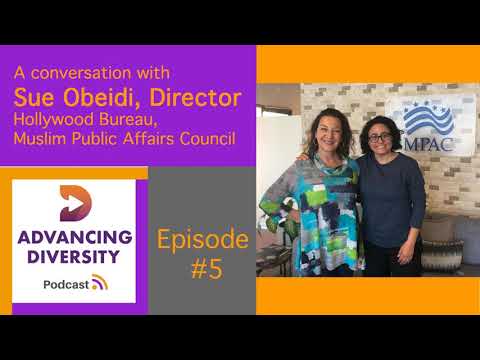 When MediaVillage hosts its third Advancing Diversity Hall of Honors on January 8 at CES, the advertising and media community will have an opportunity to join hands in solidarity and support of diversity, inclusion, and action. Leading into that event, each of our 2020 inductees has shared the strategies and best practices they have used to accelerate the move from advocacy to activism. In this installment we shine a spotlight on Sue Obeidi, director of the Muslim Public Affairs Council's Hollywood Bureau.

Obeidi is a disruptor, encouraging content creators to break stereotypes and rethink portrayals of the Islamic community and Muslim characters in entertainment content. In the face of world events, she is steadfast in her commitment to improving the quality and number of authentic and inclusive representations in media, so audiences see this community as vital contributors to culture worldwide.

In 2017, Obeidi was one of 60 change-makers named to Variety's Inclusion Impact Report, along with her friend and fellow Advancing Diversity Hall of Fame inductee, Tim McNeal. She is a vibrant, fresh, and persuasive voice who is producing results. In a companion podcast episode with E.B. Moss, head of content strategy for MediaVillage, Obeidi fully explains the case for why the entertainment industry is more influential than the government in impacting societal and cultural change.

The following is an abridged version of that deep-dive conversation. Listen here to the full interview, and please subscribe and share all the Advancing Diversity Podcasts available on Apple Podcasts, Stitcher and YouTube.

Moss: What are the origins of the Muslim Public Affairs Council?

Obeidi: MPAC was founded in 1988 as a national public policy organization working to create a better understanding of [Islam and] American Muslims. In D.C., we engage and influence decision-makers on the Hill, in the White House, and in government. MPAC also works with interfaith organizations, media, and local communities to inform public opinion and encourage active citizenship. For us, relationships are the real conduits for change; we facilitate change through engagement.

Obeidi: I've been with MPAC for 19 years. I came in as the director of operations. In 2011, I was appointed the director of both ops and the Hollywood Bureau. I've been full-time Hollywood only since 2017. I joined MPAC's Hollywood Bureau to influence the narrative around Islam and Muslims on TV, film and digital. I'm living the dream! This role allows me to blend my love of my Muslim faith with my love of entertainment. [In doing so], I can deliver fresh perspectives and new voices onscreen and behind-the-camera.

Entertainment is probably the most powerful industry in the world. While the government makes policy to protect its citizens, entertainment impacts the culture in real time. Think about how a movie, television series, or even a song influence your emotions and perspective.

Moss: You wrote: "The very recent inclusion of American Muslims doesn't erase the years of vilification we've endured in Hollywood…. The portrayal of Muslims, in general, has been caricature at best and demonizing at worst." Is that changing?

Obeidi: The short answer is yes ... even though we have a long way to go. I think back through my pop culture history and remember movies from the 1970s like The Bionic Woman and The Six Million Dollar Man, where [Muslims] were the bad guys. In the 1980s, with Back to the Future, I thought, "Wow, we've got representation." It wasn't until years later that I realized, "They included us. But, what in the world was that about?"

Then, 9/11 was a huge set-back. Things started looking up a decade after 9/11 and [even better] since the most recent presidential election. That's when the industry began to reach out to us proactively. Today, I love it when I see a hijab on a bus ad ... or when I see that the recurring lead on the CBS series FBI is Muslim and Middle Eastern. I think times are changing; I'm hopeful [they are].

We also can mark progress in that we now have entertainment award winners, including [Mahershala Ali], an Academy and Golden Globe Award winner, and [Riz Ahmed], an Emmy Award winner.

Moss: MPAC does so much; you've described it as your "five Cs" of your engagement strategy. What are they?

Obeidi: First, we consult on film, television, and digital projects. We give notes to showrunners, writers, and directors when they have a Muslim character or story arc that they want help with. We also present to studio executives to inform development.

Next, we connect. We are a conduit between some fabulous, talented Muslim screenwriters and the studios, agencies, and networks. They are reaching out to us and asking for talent recommendations.

Thought leadership is our contributing piece, including op-eds and editorials. We also organize and speak on panels, and host screenwriting, film, drama, and comedy labs. These help to get our screenwriters discovered and enable them to hone their craft.

When you consult, it's not your content; you're really ... the passenger. It's not your ship. You don't even drive the ship. And while the industry has been highly receptive to our notes, it's still not our product. So, content creation is the fourth "C" and our next iteration in the Hollywood Bureau.

Celebrating the industry through award shows is the fifth C. We've created an awards gala, which is like the GLAAD Media and the NAACP Image Awards. Every year we honor projects that embody voices of conscience. These projects don't have to be Muslim-led or even have any Muslim theme, but they must showcase universal values that are also Islamic: human dignity, justice, equality, freedom for all. It's our way of celebrating the industry.

Moss: What keeps you up at night?

Obeidi: [People don't realize that] minorities collectively will become the majority community in 2040, and we need to get America ready. But, how does America get ready? By portraying these communities accurately and providing role models in media today. Content is evergreen ... and, we need to hold the industry accountable for making sure that they portray the world as it is.

Moss: What advice do you provide when you're speaking to film and entertainment executives regarding the creation of authentic portrayals?

Obeidi: We know that misinformation is out there about the Muslim faith and community. It has fueled decades of negative stereotypes. The foundation of the Muslim faith is the oneness of God and peace.

There is often the misconception that we're only trying to create positive narratives. But, that's not true. No community is only good. We are talking about a community of 1.8 billion Muslims worldwide. We don't want to be portrayed by our most extreme elements. What we look for is accuracy.

If you turned on the TV 10 years ago, you would have seen Muslim women portrayed as submissive, oppressed, and chattel. Today, the Industry must navigate between accuracy, authenticity, nuance, and bias; we ask creators to show a strong Muslim woman, as we are the norm!

Moss: What's next for MPAC?

Obeidi: To create content…. We want to find that sweet spot where we can package and pitch our own stories. If that doesn't happen quickly, we'll continue with our short-film fellowships, where screenwriters submit scripts and we choose those we want to help produce.

Moss: Do you see the advertising, marketing, and media industry's focus on the recruitment and retention of diverse candidates positively impacting Muslims in the community?

Obeidi: Absolutely. Tim McNeal and his team at Walt Disney Television, Tiffany Smith-Anoa'i at CBS, and Janine Jones-Clark at NBC have all been our supporters and our partner in advocating for diverse hiring and actively ensuring that retention is part of the plan.... We look forward to working with them and others to keep the train moving.

Muslims are the newbies in the industry. We're standing on the shoulders of giants. Tim and Tiffany are my mentors and advocates; Tim sits on our advisory council and is being inducted with me into the Advancing Diversity Hall of Honors.

Moss: What ignited your passion for advocating on behalf of the Muslim and Islamic community?

Obeidi: I was born in the Middle East and moved to Los Angeles with my family when I was five years old. I'm sure my experience was like many immigrants who came to America at that time. I knew I was different and there was a lot of explaining to do. It was the 1970s and my LA community didn't know what hummus was. I never felt lonely, but I felt like the other.

There's one story I'd love to share: When I was in elementary school, we were asked to start a food diary for one week. Being Middle Eastern, we ate hummus, falafel, and fool. I didn't want to write that down as I didn't want to stand out. I told my mom, "For this week, I want to make sure that we have Captain Crunch, orange juice, and toast." So, at least I wouldn't lie about what I ate. Fast forward to today.... Now people are paying $15 for hummus avocado sandwiches!

Moss: In your bio, you reference that "good stories can change hearts. Changed hearts can change minds. And changed minds impact our values and can galvanize us into action."

Obeidi: A law can be put in place to not commit hate crimes against each other, but that doesn't mean that we'll love one another. A good story can change hearts and minds can unite. That's why I said that the entertainment industry is a powerful tool to [drive] change.

Weaving diversity and inclusion into the fabric of your company is good for business. And we have proof. In this podcast series, our Advancing Diversity Hall of Honors 2020 inductees each discuss the many ways their organizations champion diversity, equality, and inclusion, as well as examine the benefits to their company, constituents, and community. Each episode features one inductee's strategies and best practices that others can adapt to help their organizations accelerate the move from advocacy to activism.