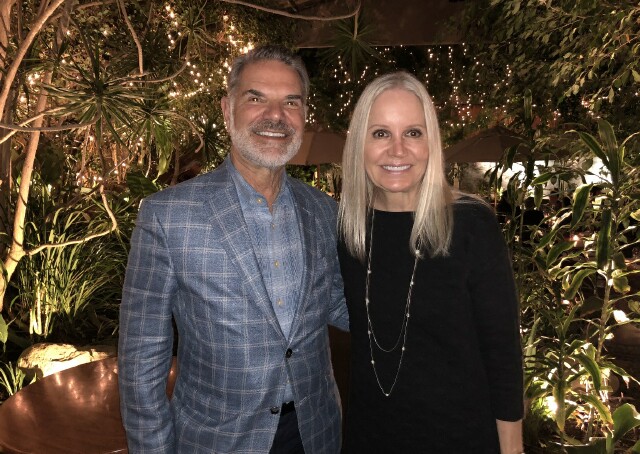 “It’s not a bad thing to want to feel good,” declared Michelle Vicary, Executive Vice President of Programming and Network Publicity for Crown Media Family Networks, during a recent dinner with Jack Myers and me at Michael’s restaurant in Santa Monica.  The topic, of course, was television.  “I love all kinds of television," she said.  "I watch everything.  There's a lot of room for dark and edgy programs.  But I also know there is a lot of room for what we do.  Look at the spectrum of the life experience.  There’s this whole range of how people live their lives and how they want to see it reflected in art and entertainment.  That’s something we have to pay attention to in a big way.”

While Hallmark Channel and Hallmark Movies & Mysteries have grown to become two of the top cable networks, and with Hallmark Drama close behind, not to mention the surging growth of streaming platform Hallmark Movies Now, the reluctance of the mainstream entertainment media to treat the brand as “hot” or “cool” was until recently as much of a mystery as the storylines in some of Hallmark’s most popular movies.  But given the success of the company it can no longer be overlooked.

“Our numbers continue to grow, even among men,” Vicary noted.  “I think it speaks to the fact that we are a place for people to come who want to feel positive.  It’s not just a ‘want.’  It’s something that people ‘need.’  A big part of our development team’s thinking is the brand, always.  We are relentless in supporting the brand.”

Making people feel positive, Vicary said, “has been our calling card for many years.  I don’t know why that wasn’t cool.  Now it is, though, because we are breaking through.  We are really resonating with people.”  That may be an understatement.  Try going anywhere these days without hearing someone talk with great love and enthusiasm about Hallmark’s programming – especially its original movies.

The reasons for the company’s phenomenal growth are many.  Its “positive” programming, all of it feel-good and family friendly, stands apart from almost everything else on television, where darkness and intensity dominate.  Many actors in its growing family of stars come from daytime soap operas on the broadcast networks, each one with a passionate fan base that will follow them anywhere.  And then there is life itself in these very troubling times.  Occasionally, we all need a break.

“I’m so honored to be part of this company and this brand,” Vicary said.  “The gratitude that people have when they come up to me or to one of our stars is wonderful.”  When stars of Hallmark movies are approached by fans, she noted, “they don’t just say, ‘I loved your movie.’  They say, ‘Thank you.’  That’s important.  You can imagine what the actors who work on our movies go through when they go to the store or walk through the airport.”

It isn’t much of a stretch to assume that Vicary, who with her team oversees the production of more than 100 original movies per year, along with four scripted series and the daily two-hour unscripted infotainment series Home & Family, is one of the busiest women in Hollywood.  She is also a very involved single mom to son Ian, 14 and daughter Hannah, 17.  “They’re really good kids,” she said.  “I’m very, very, lucky.  Their dad is very active.  We are great co-parents.”

Vicary is intrigued by the role of parents these days, which is so unlike that of previous generations.  “Parents today really work so hard to try and understand their children,” she mused.  “When I was a little kid my parents loved me.  I just don’t know if they knew me.”  When she was 17, she recalled, “It was, ‘Do I still have to sit at the kids table?  When do I get to sit at the adults table?’  Now, at 3, we’re asking our kids what they would like to have for dinner.  When I was 17 nobody was asking me what I wanted to have for dinner,” she added with a laugh.

As a child, Vicary learned about being a single working mom from her own mother.  “She was an administrative assistant to the county supervisor in Simi Valley for Ventura County,so she was very involved in politics,” she said.  “We would learn all about it at the dinner table.   My mom was divorced young.  I knew that she was a working woman.”

She also learned a good deal about how families can work together and help each other.  “My grandparents moved nearby us, much to my mom’s chagrin,” she laughed.  “A lot of times after we got out of school I would stop at my grandparents’ house.  We would sit and watch Jeopardy! and Wheel of Fortune in the afternoons.”

Looking back, her family influenced her interest in show business.  “Most of my family moved from Ohio to Los Angeles in the ‘40s,” Vicary said.  “My great uncle and grandfather both got jobs in the industry, one at Paramount, one at Universal.  My grandfather was doing electrical and helped build sets.  He would come home and say, ‘Elizabeth Taylor locked her keys in her car today.  I got her keys out of her car.’  He would have stories from before I was alive about Lana Turner, Betty Hutton.  Then he would say, ‘I was on the Brady Bunch set today.  I was like, ‘Oh my God, the Brady Bunch!’

“When I went to college, at Cal State Northridge, I remember wondering where my first job would come from,” she continued.  “How did my grandfather and great uncle do it?  Even my aunt had worked in television.  I thought they had such magical stories.  I was sure I had no chance of getting jobs like that.”

One week before this interview, Vicary told us, her alma mater gave her an alumni award.  That was certainly noteworthy, but the school had done something equally special the previous year, asking her to speak at its 2018 graduation ceremony.  It proved to be an unforgettable experience.

“Cal State Northridge has a very large student population,” she explained.  “Thousands of kids were going to graduate.  That’s a really long time on stage.  I was the last speaker.  I was the person who got to say, ‘You can take your tassel and move it from here to here.’  I can’t tell you what an honor it was to watch all those young adults come up on stage and walk past me.  I got to watch each face walk by.  The future is theirs.  If I could have done it for another three hours I would have been equally as mesmerized.”

Later, she posted a picture (below) of the event on social media.  Not surprisingly, the actors who work in Hallmark productions made sure that countless people would see it.  “Our Hallmark stars, who are truly family, all retweeted this picture and posted it,” Vicary said with a smile. 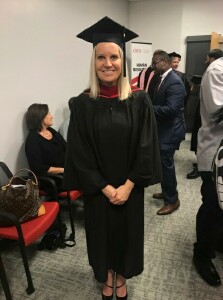 Earlier this year Vicary celebrated her 20th anniversary at Crown Media.  Given her success at advancing the Hallmark brand during the last two decades, it was somewhat surprising to learn that her first job out of college – and her launch into the entertainment business – was in the music industry.  That was back in the day when music stores were among the most exciting locations in the country for young people to gather.  “It was an opportunity to work with all of the different labels,” she recalled.  “Our company would buy singles from all the labels and then sell them to the stores.  I got to work with every single label, which led to my getting a job working for an independent label, Caroline.  My job was to liaise with Sub Pop Records, just before grunge music became a thing.  We would watch the Billboard charts every day and see Nirvana move from being one of the coolest bands in Seattle to one of the most iconic brands in America and worldwide.  And Soundgarden and all the other bands that were a part of that.  I became one of the people who worked to make all that happen.  I loved that job.  But at some point, I remembered that I had gone to school for film and television and that was what I really wanted to do.

“I had a contact at MGM, and I basically started over in my 30s,” she continued.  “I got a job helping launch international networks at a very entry level … luckily it was entry level for about two weeks, and then they said, ‘Oh, she’s really talented.’  After working at Caroline during one of the most exciting music revolutions it was really an exciting time to launch television channels.  I was in programming.  I learned how to imagine a network and then make it a network and then sell it into the territories for which the network was intended.  We launched into Brazil -- MGM Gold Brazil -- and it was done.”

From there, Vicary moved on to another “new network,” a partnership between Hallmark and The Henson Company, where she worked for the highly respected television executive Margaret Loesch.  “She was such a mentor, such a pivotal person in my life,” Vicary recalled.  “[Crown Media Family Networks President and CEO] Bill Abbott and I have talked together about what a lovely, strong, brilliant leader Margaret is.

“I was hired as a manager of scheduling,” she continued.  “One of my goals was to transform this network into a must-have for people.  The mainstream phenomenon that Hallmark Channel is today has been very purposeful, but not dogmatic.  Bill’s ability to change and listen is amazing, and the results have been great.  But no matter the level of success we remind ourselves that we have to take ownership of the achievements and at the same time ask, ‘What more can we do?’  We are very nimble.  Bill constantly pushes the team.  It is an ongoing, rigorous evaluation of our ratings, of our ad success, of what the advertisers want, what the viewers want, and how they want it.  Are we looking for new viewers who don’t watch us today?  Are we looking for viewers who love us, but we want them to watch us a little bit more?  It’s brilliant really in terms of thinking about how our business is going to continue to grow.”

Like the rest of the Crown Media team, Vicary is an advocate for dog and cat adoption.  “Adoption Ever After is our corporate cause,” she said.  “We feel very passionate about it.  We want to make it a huge priority in the public zeitgeist.  We need it to become a huge global initiative.

“Crown Media and all of the things that we do is about purpose,” she continued.  “It isn’t accidental that people are responding so well to us.  I don’t think it’s a bad purpose in life to say we are going to figure out how to make people feel positive.  We are making people feel good about connecting with other people.”