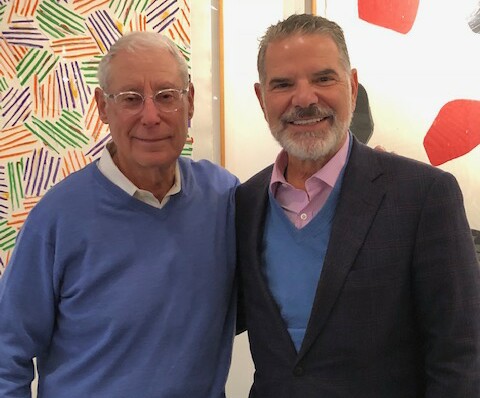 Most people in media know Henry Schleiff for his executive leadership over the years at Viacom, HBO, Court TV, Hallmark Channel and now Discovery, where he is currently Group President of Investigation Discovery, Travel Channel, American Heroes Channel and Destination America.  Few if any know, though, that in the late Seventies his very first foray into the television business was as a freelance writer for NBC’s Saturday Night Live.

After graduating from the University of Pennsylvania Law School in 1973, Schleiff clerked for Murray Gurfein, who had famously written the Pentagon Papers decision in the district court.  He then moved on to Davis, Polk and Wardwell.  “I was a serious lawyer from 1974-78 while also writing freelance for Don Novello, Father Guido Sarducci, on SNL,” he told Jack Myers and me over a recent lunch at Michael’s restaurant in New York City.  “Very unsuccessfully,” he added with a smile, referring to his joke-writing skills rather than his legal acumen.

“SNL never used any of my submissions, and they never paid me,” he continued.  “My compensation was I got to go to a couple of the dress rehearsals.  I was overpaid in that respect.”

Fortunately, Schleiff didn’t harbor any strong desire to become a writer.  “I just thought it was fun,” he said.  But he may have passed said desire along to the oldest of his two sons, Sidney, an aspiring writer who worked on Veep and now has a pilot in at HBO.  “He’s waiting for a green light, going through all the trials and tribulations which I was lucky enough to avoid because I never stayed on that side of the desk long enough to be a true creative.  I worked my way over to the other side.”

Schleiff’s failure in late night comedy writing did little to compromise his comedic timing.  Noting that he graduated from the University of Pennsylvania, Schleiff added, “I’m still on the waiting list for Harvard Law School but it’s not looking good.”

His success at Davis, Polk and Wardwell propelled him into the television business when he was recruited by Viacom to become Assistant General Counsel in 1978 and then on to HBO in 1980, where he was asked if he was interested in giving up the practice of law and serving as Vice President of Sports and Theater, “both of which I love,” he said.  HBO had television rights to Wimbledon at the time.  “They said we need you to let us know soon, because we need to send somebody over to Wimbledon,” Schleiff recalled.  “I said, ‘Do I pay you or do you pay me?’ showing a certain feel for business affairs (and, again, for comedy).”

As with many television executives who were part of the explosive growth of cable in the Eighties, Schleiff looks back on his time at the pay-cable giant as a wild ride.  “HBO was growing by leaps and bounds in subscribers and revenue,” he said.  “It was the only game in town.  Showtime was not really a competitor to speak of.  I like to believe -- and you know me, I’m not demure – that I was part of a team in that period, 1980-87, that really took HBO to another level of success.  I ended up being Executive Vice President of Administration.  I had a lot of different areas reporting to me.  It was different than the world is today.  It was convivial.  It was fun.  Time Inc. owned us, and they had no idea what we were doing.  They just knew that we were throwing off a lot of cash.

“Like any good managers, Michael Fuchs (CEO of HBO at the time) and others kept the in-fighting among the parents away from us,” he continued.  “They avoided having us get trampled and let us do out thing.  When I look back at those times, I’m struck by the conviviality of it all.  You had a bunch of people who were masters at distribution, at business affairs, at making deals.  They would call Robin Williams’ manager say, ‘Let’s make a deal.’  I remember making the Barbra Streisand deal from Fuchs’ back yard in the Hamptons.  He said, ‘What do we pay her?’  I said, ‘I thought you knew!’  We were really inventing the rules as we went along.  The characters there behind the camera and in front of it were so phenomenal.”

Schleiff’s world of phenomenal characters further expanded in 1987 when he returned to Viacom, having been recruited by Frank Biondi, who had himself been brought over from HBO by Sumner Redstone after the latter purchased Viacom earlier that year.  “It was such a learning curve because then we were producing, which I had never done before,” he recalled.  “Instead of pay television we were producing for broadcast television.”

His next move was to Court TV.  “It was half-owned by Liberty, half by Time Warner, and they had both written it off their books,” he said.  “John Malone and Dick Parsons, the guys that I reported to, were incredibly supportive giving us additional money for distribution and programming.

“The first week I was at Court TV they gave me the research for primetime and I looked at it and I saw carrots!” Schleiff laughed.  “I had never seen a carrot at 8, 9, 10 p.m.  A carrot means there is no viewing -- absolutely no discernible, accountable viewership.  I said, ‘Let’s at least get a heartbeat going here.’  We had to carry live trial coverage for the affiliates during the day.  We didn’t have to do that at night.  We had courtroom talk shows with Johnny Cochran, Nancy Grace and others.  I wanted mainstream content.  You could buy then at a reasonable price reruns of Homicide.  We put that on with some original shows behind it.  That was the strategy, and it worked.  The original shows began to do well.

“What I learned there, which I took with me later on, was that you could create all these originals at a reasonable price and put them on in prime,” he continued.  “That’s really been the secret to ID.  Court TV was a little bit of a focus group if you will for what ultimately became ID.”

After Court TV was sold, Schleiff decided he was going to take a break.  He had no plans.  “They gave me a great office at Time Warner and this and that,” he recalled, “and after I sat up there for a couple of weeks my wife said, ‘You have to do something.’  My golf was actually getting worse!  I was hitting people in the hallways with putts, which was not a good thing.”

Then Hallmark came calling.  “[Hallmark Chairman] Donald Hall Sr. said to me, ‘You sold Court TV.  We have this Hallmark Channel that we have problems with.  We’re in the card business in Kansas City.  Do you think you could sell Hallmark Channel?  I said, ‘absolutely.’  The model was very simple, a la Court TV, which was to be very consistent, appeal to mainstream America and be predictable.  We then did 20-25 movies a year.  Now they’re doing 60-70 movies a year.  Much to their credit, they are very predictable holiday themed movies, which I applaud because it’s a page out of our book of consistency and predictability.  When I was there, we were a lower cost version of what the channel is today.  But we moved from 50th to 10th just by offering The Waltons and some movies.

“At one point, Hall came to me and said, ‘You know, we’re now in the age of digital.  The electronic ability to send cards to people is hurting our business with cards, so to the extent that Hallmark Channel is beginning to work we don’t want to sell it.’”  Schleiff then left Hallmark for Discovery.

In a meeting with [Discovery Inc. President and CEO] David Zaslav, Schleiff said, “You have this little investigation channel thing.  The name is already in place.  I’m not sure what it investigates but I think I could make it a successful network, a top ten network over time.”

Zaslav’s answer, Schleiff recalls, was a simple “no way.”

Schleiff pressed on.  “I’m here for the fun of it, and for the challenge,” he explained.

Today, Schleiff proudly noted, ID has 650 hours of originals per year.  It is No. 1 total day for women 25-54 and No. 1 for people total day in 25-54 in all of cable.  It is also No. 10 in prime in ad-supported cable.  In addition, he continued, “ID has been the No. 1 network in all of television, broadcast and cable, for length of tune.  No other network has viewers who watch for as long as viewers watch ID.  Asked what he attributes that to, he replied that the secret is in the storytelling.  “There’s no way you’re tuning out before that last segment, because with an ID mystery you want to see who did it.  Whatever it is, there is great storytelling.  It’s the same as if you went to see the carvings in Lascaux caves in France.  You wouldn’t stop at the first gap with the guy chasing the animal.  You would go to the back of the cave to see what happened.”

One might say Schleiff’s early love of comedy writing is evident today in the titles of some of the buzziest original series on ID, which have included Wives with Knives, Sinister Ministers and Southern Fried Homicide.  These shows are now part of the pop culture pantheon thanks to repeated mentions by Jimmy Kimmel (his Aunt Chippy is a fan) and John Oliver (who once exclaimed that he can’t believe there is a television show titled Wives with Knives), recurring sketches on Saturday Night Live and a full storyline five years ago on South Park.

Meanwhile, building off the long-time success of Ghost Adventures, Travel Channel -- the newest addition to the growing stable of Discovery networks that Schleiff oversees, now with 82 million subscribers -- is becoming “the dominant player in the world of adventure, myths, mysteries and the paranormal,” he said.  Asked if that translates into the Travel Channel brand, he replied, “A good story is a good story, and people will find it wherever it is.  If people really like a network they’ll say, ‘What’s that thing with those myths and mysteries on it?’”

Schleiff has been married to his wife Peggy for 34 years.  “There’s a lot of betting in Vegas now on 35,” he laughed.  “I’m not giving you any inside information.”  He’s the father of two creatively gifted sons, Sidney the aspiring writer and Harry, an artist who recently completed his Masters in painting at Columbia University.  He’s pursuing painting and sculpture and has earned awards for his video work.

When he isn’t running four networks Schleiff likes to relax with family and friends, including close pal and tennis partner Regis Philbin and his wife Joy.  “We go up to Regis’ house in Greenwich every couple of months and we go out to dinner, but first Reege and I like to watch the old Dean Martin shows.  I keep saying to Regis, ‘Look at those hands.’  Dean was a former boxer in Steubenville, Ohio.  To me he’s so ballet like.  Our wives are running around while we sit on the couch, Regis and me, mesmerized.