Lunch at Michael’s with UP TV CEO Charley Humbard 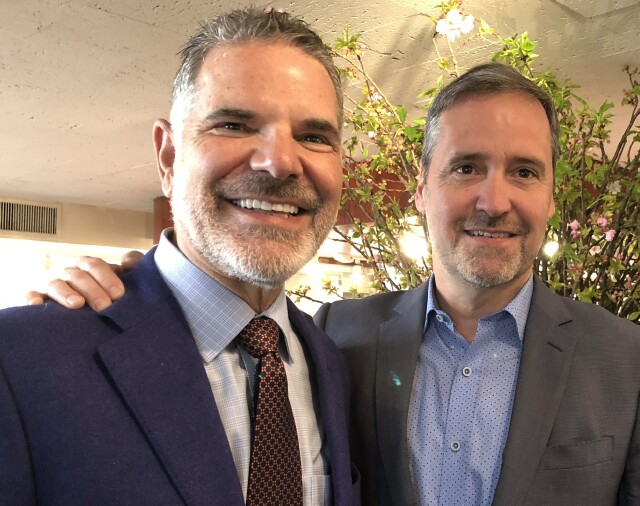 “It was a very different way to grow up.  You don’t realize it while you’re doing it.  Getting on airplanes, traveling around the world, singing in stadiums.  I never knew anything else.  At age five I did my first television show, with my dad and sister.  We took people on a televised tour of the Holy Land.  We also did a live satellite broadcast at Christmas.  It was the first time that a live show had aired from there in the U.S. and around the world.  We took people on an intimate tour of places where Jesus walked.”  That’s not a prominent entertainer talking about the early days of a lifelong career.  It’s Charley Humbard (pictured top right), the founder and CEO of UP TV, recalling a childhood spent traveling and working with his father Rex, the first televangelist, during a recent lunch with Jack Myers and me at Michael’s restaurant in New York City.  We were joined by Amy Winter (pictured below, center), Executive Vice President and General Manager, UP.

“Time magazine’s managing editor coined the name ‘televangelist’ after dad in 1974,” Humbard shared.  “That is a question on Jeopardy! by the way,” he added with a proud smile.

Rex Humbard was host of the weekly series Cathedral of Tomorrow, and he was also a visionary leader in television technology. He was the first person to put a church service on TV every week, beginning in 1953.  “He built the Cathedral of Tomorrow which was the first megachurch,” Humbard recalled.  "The 5,400-seat round cathedral had the largest free-standing dome in America.  Dad had big ideas.  He pre-wired the cathedral for television when it was built in 1952 (television had begun active broadcasts in 1949), and was the first to ‘station hop’ by using a microwave signal to send the broadcast from Akron to Cleveland."  Humbard also developed the national TV syndication model for his weekly show, expanding to global distribution as well.

Charley, Rex’s youngest son, has continued his dad’s legacy as an innovator in the television industry.  The twin influences of technology and striving to uplift mass audiences with positive messages have remained with Humbard throughout his life.  “I got to witness them first hand,” he said.  “Watching how dad lived his life was very influential.  His greatest gift to me was watching him live.”

A childhood and adolescence spent traveling around the world as a television personality with his family as his father continually broke new ground in entertainment, communication and technology led Humbard to an eventual gig as a senior audio engineer at Turner, followed by ten years at Discovery launching four brands in 140 countries and six domestic digital cable channels.  But it all culminated in his most passionate endeavor to date: the creation of Gospel Music Channel in 2004, which became GMC TV in 2010 and, a few years later, UP TV. 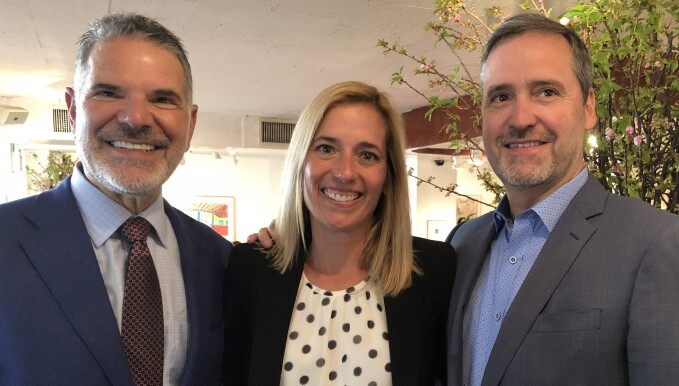 “NRG took the whole television landscape and divided it into three big buckets,” he shared to explain the UP content and business model.  “One is Family in Mind; that’s 40-plus million.  The second is Reality Escapist; that’s about 42 million.  The other is Blurred Lines; a smaller group of about 26 million.  We believe that Family in Mind is a huge opportunity for us.  As we’ve drilled into this during the last five years we’ve found that it’s the most valuable group of the three.  The stats are surprising.  They are more A and B county, more higher income, more educated and they cut across Democrats and Republicans, not just Red states.  Its people who care about family, about home, and about faith and values … and, by the way, they love traditional television!  You put those four pieces together and you’ve got a great opportunity.  We continue to use data and research to make us better and smarter.

“I think that’s so important with an entertainment brand, especially when you are trying to touch people’s hearts like in our case at UP," Humbard continued.  "We’re not a head brand.  We’re a heart brand.  Working with Nielsen, NRG, Mediavest and Scripps we’ve interviewed over 15,000 people to create the Family in Mind reservoir of information, so we understand this 40-plus million audience better than anyone in the business.  How to talk to them, how to market to them.

“I was around the music part of dad’s shows a lot,” Humbard said as he recalled the launch of Gospel Music Channel.  "I grew up with Mahalia Jackson, Johnny and June Carter Cash, young Amy Grant, Andre Crouch and the Disciples.  They were groundbreaking.  Performing on dad’s show could make or break someone’s career.  Dad knew that entertainment would be key to drawing in the non-believers.  Great music and great entertainment along with a great message, which was the core of how he set it up.

"Being a part of Dad’s shows gave me exposure to a couple of things that I’ve carried forward: combining entertainment with a purpose and a strong message, and being diverse in the way you approach it,” he told us.  “Gospel Music Channel featured rock, pop, country, soul.  It was the first time that gospel had been brought together in that way outside of an award show.  Gospel artists played on black stations, the Christian artists played on white stations, country artists played on country stations.  No one had brought them together like that.  It was a groundbreaking thing for us to do.

“I love the space UP has defined because it’s probably the most relatable television on television,” Humbard said with a smile.  “We’re all a part of a family, so there is so much subject matter there.  UP shows life’s biggest moments and for families it’s the most shared subject on social media.  We have teams of moms watching all our shows and movies before we acquire them and put them on the air.  Regular moms.  They’re the front line.”  The moms, he explained, were found through relationships with employees as well as a research community hosted by Vision Critical.

“It’s important to understand that we are an adult-targeted network, because we are talking about family a lot,” he asserted.  “We know that what we’re doing on the programming side appeals to families who feel good about watching in a co-viewing environment.  Our research says there are four things families cherish the most.  No. 1, family.  No. 2, home.  No. 3, faith and values.  No. 4, they love traditional television, which is icing for us.

“When [things are] really dark, whether its politics or whatever, it’s interesting to note the shows that start to rise back up,” Humbard mused.  “Look at WGN right now and [its success with] M*A*S*H.  We’re getting ready to put Home Improvement on.  Back when we put The Waltons on it was the same kind of environment.  Television ebbs and flows depending on the environment and the culture and what’s going on in America.  Right now, people are back into the space that UP is in.  Our value proposition is to continue to be uplifting entertainment, the light in a very dark media landscape.  It sets us apart from everybody.  It creates success, and that’s why advertisers should look at us.  It’s a trusted environment.  We have the formula right."

Asked what his favorite shows were when he was growing up, Humbard listed many standard Baby Boomer favorites, including Gilligan’s Island, Dark Shadows, Lost in Space and The Wild Wild West.  Not surprisingly, the No. 1 show in the Humbard household was The Waltons, which ran on UP before it moved to Hallmark Channel.

Humbard described his father as “purpose and mission driven,” explaining that he focused on people's souls as a “salvation minister” at different times during our lunch.  "Dad's messages were simple," he said.  "He was not into politics; not any of the stuff that you see so much of today.  He always used to say that a pastor in politics is like a blacksmith pulling teeth; it would be a bloody mess.  He would never do it.  We have a lot to learn today, right?"

Asked what he does in addition to running UP, Humbard replied with a wistful laugh, “The answer can’t be raising boys anymore because they are about to ship off.  They are 18 and 20.  One is a sophomore in college, one is about to go to college.

“I spend as much time as I can in Park City,” he continued.  “We have a house there, so I ski and spend summers there.  We mountain bike, hike, camp and fish a lot.  Fly fishing is probably my main passion.  It’s as zen as you want it to be.  It helps me get away from it all, but I’m very competitive, even with the fish.  My wife is heading back to work after 18 years of raising boys.  It really was a privilege for her to get to stay home and raise them.  We were blessed that she could do that.  She just started back as a finance accountant.  She was temporarily CFO of Nat Geo International for a while.”

When we first sat down at our table I had told Humbard that I am currently mentoring several aspiring young inner-city actors and writers in Bridgeport, Conn.  As our lunch was about to end I asked him about a blue UP wristband he was wearing.  The response crystalized and reinforced the entire conversation as well as Humbard’s message about his work.  “Give me your arm,” he replied.  “Here’s how it plays.”  Referring to the wristband he said, “You were going to get this anyhow today for the work you are doing in mentoring people.  I usually give [a band] to somebody who uplifts me.  I always have one on and pass it along.

“Outreach is a natural extension of our brand,” he concluded.  “We remind viewers to do something good for others.  We call that Uplift Someone, which is our outreach.  Try to make a difference.”

Amy Winter shares more about UP's programming in this interview.