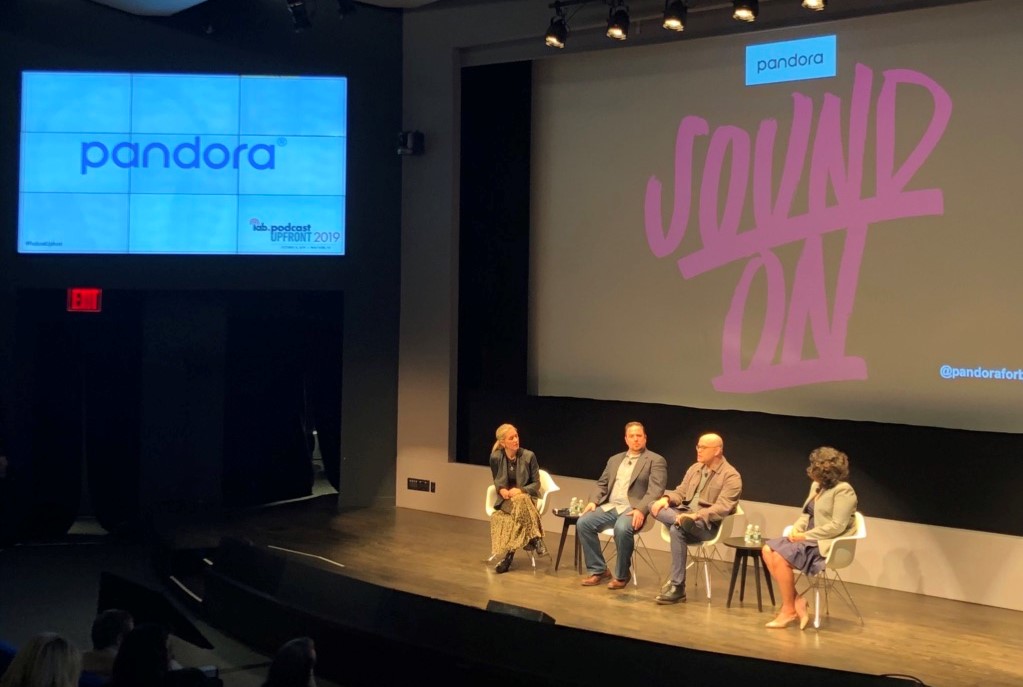 In the now annual IAB Podcast Upfront – a "one-day marketplace for advertisers and media buyers to preview the latest in innovative podcast programming" - the capacity crowd of media execs and makers crowded into the Henry R. Luce Auditorium by the Hudson River to hear what the new surge in listening will mean to them.

The day-long event of presentation-styled pitches kicked off with Wondery's well-spoken CEO, Hernan Lopez, and print journalists turned truth-speaking audio documentarians, including Laura Biel and Joe Nocera, talking about their brand of storytelling. This line-up set the stage for the announcement of their partnership with NBC News to build out and cross-promote news and politics podcasts starting in 2020.

Reflective of their own stepped-up areas of content, Pandora's Lizzie Widhelm (pictured at top), senior vice president of Ad Innovation Strategy, moderated a panel that represented different verticals and points of view: Michael Bosco, director of cross-channel media at TD Ameritrade, who greenlit, "Talking Green", produced by New York Times' T Brand Studio, described the brand's evolution in embracing the medium. They shifted from just being in the intuitive and safe spaces of finance podcasts to recognizing that "people listening to fantasy football, etcetera, can be the target audience, also."

For T Brand Studio themselves, packaging and selling their own bespoke New York Times content on tough topics, such as 1619 on the anniversary of slavery, isn't always easy. Still, Adam Aston, their vice president of Editorial encourages creators to think "audience first and have a bravery around topics, and finds more advertisers are becoming willing to step beyond conventional advertising – putting themselves in content that is deeper."

Fellow panelist, Juleyka Lantigua-Williams,chief executive officer of Lantigua Williams & Co, knows something about less conventional content destinations as her company aims to break down cultural – and multicultural – barriers. The power of personalities and the inherent intimacy of podcasts is winning fans and sponsors. Their flagship show,Latina to Latina discusses the challenges of existing, and then thriving, as women of color, while recent show addition, Feeling My Flo, talks about menstruation "as an event that happens to all types of bodies."

Even with increased audience levels, Widhelm asked Lantigua-Williams about the revenue realities of today's podcast economics, as advertising increasingly moves to more lower cost dynamic insertion. Lantigua-Williams believes producers must evolve the current model because those passionate listeners want to "go on a first date with host!" That means enabling more live events that offer in-person experiences, and brand extensions or focused "segments that create community, and that drives more sponsorship," she said.

Bosco, as a brand marketer, also acknowledged that "Measurement is still a challenge in [podcasting] but we knew it was an important place for us to be. While we're data heavy, we're also interested in pushing ourselves.... The fractionalization of where folks are listening is a challenge for optimizing, so it's key to work with your media partners to identify what the right message is that will break through and make it a partnership. No one knows the audience better than the podcast publisher or developer."

That topic of measurement hovered at or near the surface of most conversations. One attendee, David Raphael, whose company PMM represents such top podcasts as Joe Rogan's, explained why they recently signed on with Nielsen's new-ish Podcast Listener Buying Service: "Podcasting as an industry has had not bad data but just not enough. To increase a more diverse pool of advertisers [we need to] have definitive conversations with data in hand. So, when you walk into a new advertiser and they say, 'how do you index against X', we have the answer to that question, with a level of data that we've never had before. That lets us go to people who haven't actually used podcasting before and say, 'here's how we index against this category...here's how likely these listeners of This American Life, or Dax Shepard's show, are to buy this, or subscribe to that.' And those very specific questions with data against our individual programs will enable us to not only increase revenue, but also the diversity of new advertisers in our shows." 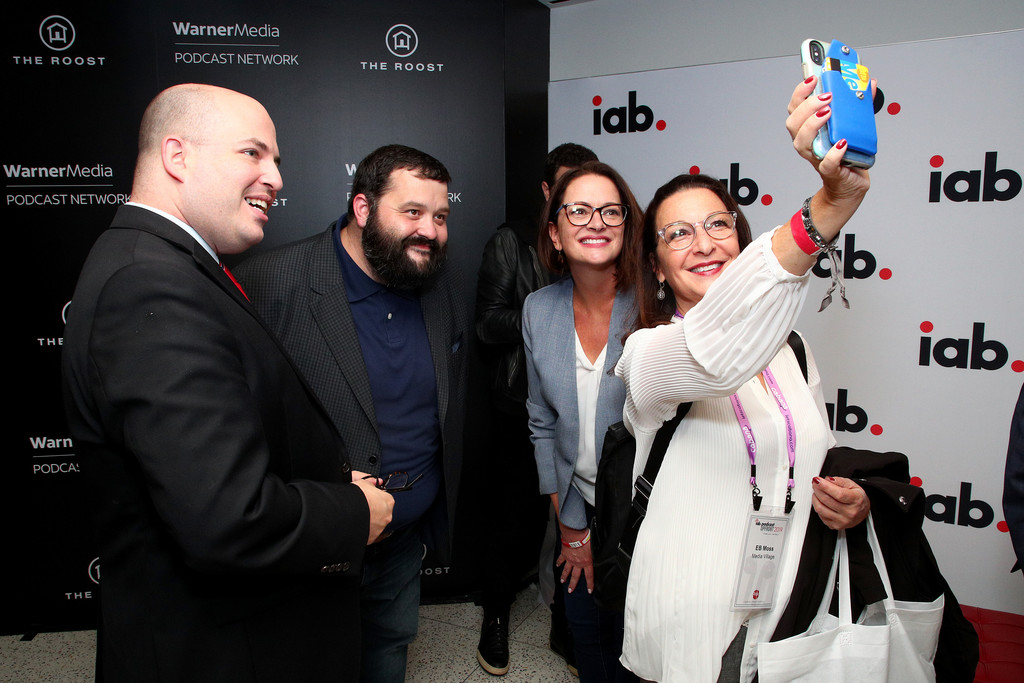 PodcastOne and Edison Research teamed up to offer another side of metrics: the premiere of a superfan study, a first-time drill down of those consuming five or more hours of podcast content per week, (fifty percent of whom consume eight hours or more.) Edison's senior vice president, Tom Webster, acknowledged those fans admit trying to limit their exposure to advertising...yet, he shared, almost 40 percent say podcast advertising is still the best way to reach them, and they do pay attention more to those ads. That's a good tip – which is why PodcastOne chief executive officer, Peter Morris, urged attendees to invest now and invest big in podcasting, because another thing about those super fans?... 37 percent have pulled the plug on cable and satellite, with most opting for a paid video subscription service.

Satisfying the mature listener and younger fan, and those in between, WarnerMedia Podcast Network unveiled new content for almost every genre, given their massive access to content. Extensive new content is set for CNN and HLN, especially since investigative reporting podcasts have spawned the darling of podcast genres, True Crime. One compelling story will surround the 2017 murders of two young girls from Delphi, Indiana. On the sports side, Turner Sports basketball commentators Candace Parker and Kristen Ledlow will bow a new podcast during the 2019-20 NBA season.

Tyler Moody, vice president and general manager of the podcast network, presented together with finger-on-the-pulse producers, Rooster Teeth, to discuss their line up aimed at 18-34-year olds. As Moody explained, "Whether it's working with independent podcast creators on content or engaging with advertisers to build a bigger campaign, we're able to add additional scale to our portfolio, additional revenue opportunities, and another layer to our fan engagement strategy."

Rooster Teeth co-founders Geoff Ramsey and Burney Burns said for their target, "YouTube is key, but that target then moves on to Apple and Spotify, so content needs to be accessible and wherever they are." Hence, The Roost, the podcast creation arm that will enable another point of their 360-degree touchpoints, launching several new shows, including new entries in the scripted space, such as horror pod, Beneath tied to the ghosts of the Titanic.

More new expansions are also on hand from other companies aiming to connect their platform dots, like Meredith, which announced a slate of content from InStyle, Parents, and the steadfast People, talking royals to crime to health, via a new People Daily coming in 2020 with an ambitious Monday through Friday schedule aimed at tapping audio to further their mission of "making people smarter and happier." 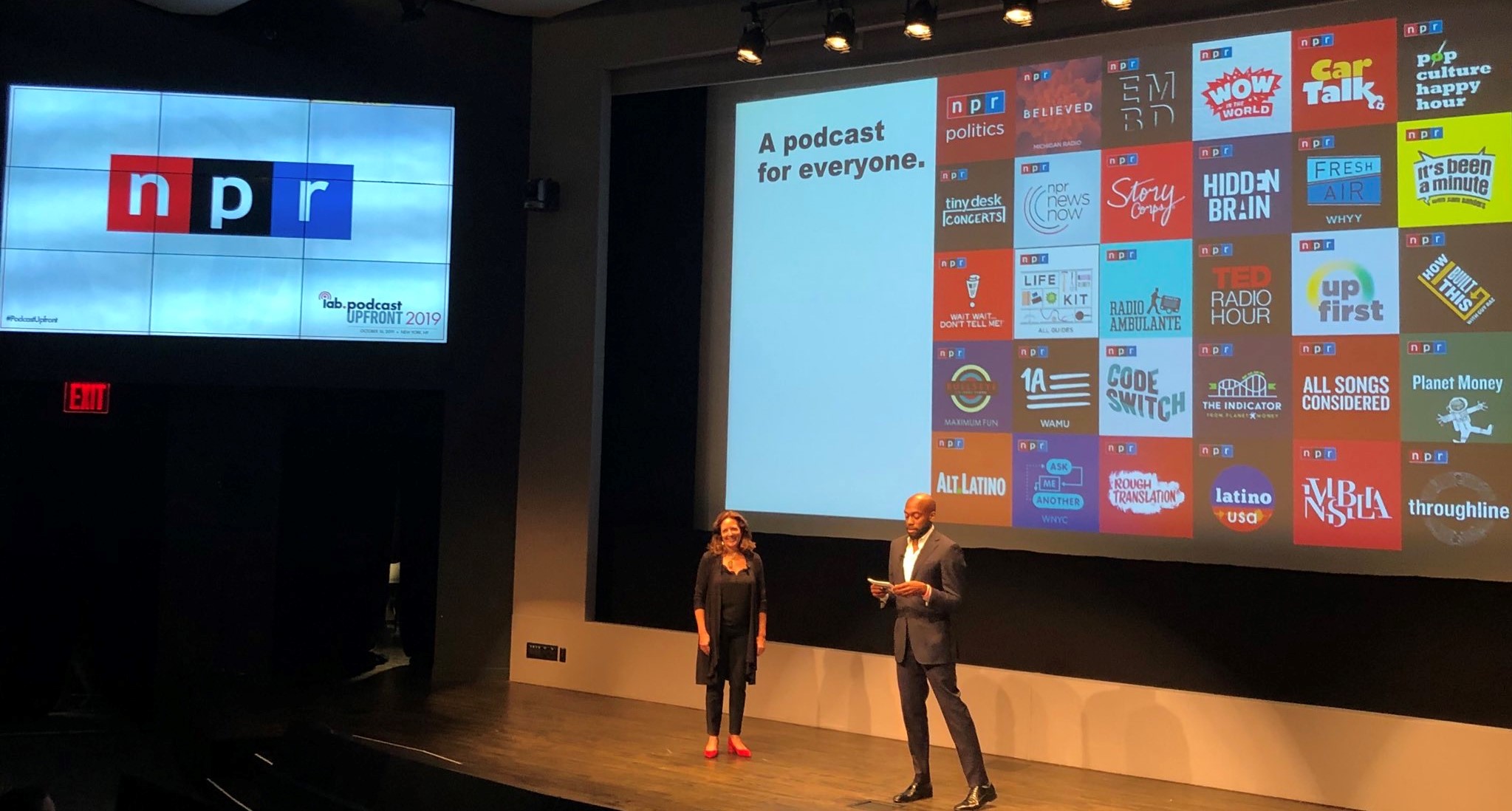 And last, but certainly not least, as it is still the top podcast publisher of all, NPR is upping the ante on daily, on-demand audio. As of last week, the company has four shows in production that publish every weekday –Up First, The Indicator from Planet Money, The NPR Politics Podcast and the latest, Short Wave . Per Anya Grundmann, NPR's senior vice president of programming and audience development, the company is "motivated to share information and experiences in ways that make it easy to think, dream, be inspired and informed as you go through your day, no matter the topic or how you choose to listen."

Illustrating that inspiring and informative content that is NPR's legacy, the hosts of Throughline were on hand to explain their premise: "the 24/7 news cycle doesn't offer historical context, and when it's dry, it's dry." But listen to them explain the history of a current buzz phrase in the news, such as "conspiracy theories", and run it through the kind of cinematic machinations of NPR and it's brought to life. In a rare use of a case study among presenters, though more were likely craved by an audience comprised of a decent number of brand marketers, National Public Media's head, Gina Garrubbo (pictured above with Sam Sanders) built a case for sponsorship via an overview of an American Express campaign and NPM Creative's prized Brand Soundscapes tool.