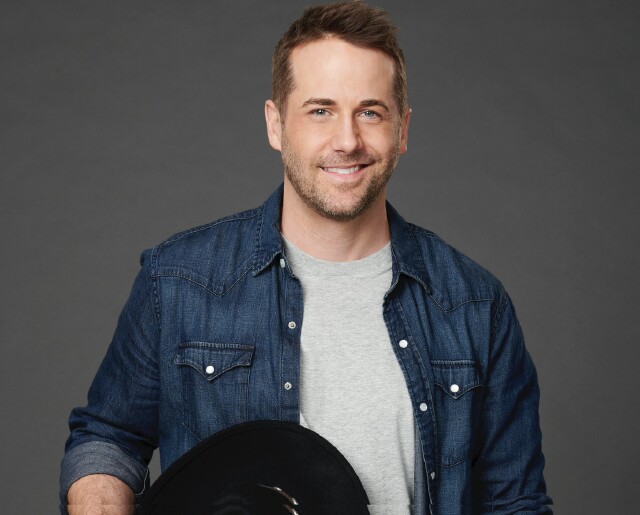 Actor and Crown Media fixture Niall Matter returns to Hallmark Channel this weekend in the premiere of Country at Heart, playing country music songwriter Grady Parker, opposite Jessy Schram and Lucas Bryant. For the past few years, Matter has been comfortably busy with his recurring role as Nick Miller in the hugely successful Hallmark Movies & Mysteries franchise Aurora Teagarden Mysteries (starring opposite Candace Cameron Bure), although he has managed to squeeze in the odd movie for Hallmark Channel, like 2019's Christmas at Dollywood.

Country at Heart marks a return to the romance genre that first attracted him to working with the network, along with some unexpected old feelings. “For me, this project separated itself from the others [I've done] for Crown Media because of the musical aspect,” he said in an exclusive interview with MediaVillage. “I was excited to be a part of a musical piece, as the songs are great and really catchy. It was a big departure for me, so it was a little stressful and nerve-racking, but at the same time exciting. When I first started [acting] I would get butterflies, and I haven't felt those in over a decade. I guess that happens when you get comfortable in your job, so feeling them again was exciting. It felt like a fresh start and so awesome stepping out of my comfort zone.

“I grew up musical, playing the drums and singing country songs with my dad,” he continued. “I knew how to play [guitar] power-cords, so I could play Nirvana songs, but I had to learn how to sing and play. Separately it was easy but marrying those two was the hardest thing to do. In the timeframe I had I think the only reason I could was because of my drumming background, where you have four limbs doing different things at the same time, so a lot of that came into play.”

Another thing that helped make it easier was his Country at Heart co-star. “Luckily, Jesse (Schram) did a lot of the heavy lifting and I could hide behind her beautiful voice and guitar playing,” he laughed. “So, it was all good. Jesse is a great singer-songwriter.”

One thing he never expected was playing his first concert. “We'd gone into the recording studio separately to lay out the tracks,” he recalled. “There was no rehearsing [together] beforehand. The first time we actually played together was on set and the playback wasn't coming through properly, so we played live in front of all the extras.

“It was my first time playing live in front of anybody – like 150 people at the bar in town!” he added. “The performance of ‘Big Deal’ was [our] first day and we went right into it. But it was great because it got the nerves out of the way and then I started getting more comfortable. It turned out to be a really good way to find the character of Grady.”

Since joining the fold in 2016’s Stop the Wedding, Matter has amassed an impressive list of 16 Crown Media credits and happily admits to still feeling like a kid in Hallmark’s toybox. “I find that this career keeps me young,” he shared. “When I was younger, I'd be described as having ‘devilish charm.’ Now I've tapped into my ‘boyish charm.’ I think that has to do with having children, so it's the perfect storm. So far, I’ve gotten to hit the ice and coach kids and dance, so this was another tool in my toolbox.

“My working relationship with Hallmark began when my family started,” he added. “Having kids really softened my heart; dealing with them and my wife, who I love dearly, I'm just in a different place in life and these roles I get to play … I get to live in that space. I'm very happy every single day that I get to go to work. It's been a four-year run, almost, and it's a great family I've found myself a part of at Crown Media. Sixteen projects, in four years, is phenomenal and I'm very, very, grateful.

“I look at every single person I've worked with as a friend,” he continued. “That's rare. I know people often say it, but I truly feel this is different and everyone from the actors to the executives are family that care about each other. I have zero complaints and am a very fortunate guy.” With his roles for the network garnering awards, like the Leo Award for Best Lead Performance Male, Television Movie for 2018’s Frozen in Love, one he described as, “really unexpected,” Matter's chameleon approach to his work ensures much more Hallmark in his future.

As for a sequel to Country at Heart? He’s all in. “My fingers are crossed for a Country at HeartChristmas movie, as I'd love to see these characters continue. But that would be a way’s off, if it happened, and the other Christmas movies are [now] the priority. We all understand Christmas for Hallmark is the biggest thing and it's going to be full-blown Christmas, so those movies are ready.” [He just wrapped Never Kiss a Man in a Christmas Sweater co-starring Ashley Williams, along with Aurora Teagarden Mysteries Reunited and It Feels So Deadly, which initially stopped production five days into shooting due to the coronavirus shutdown.]

“Quarantine was a little intense,” he shared in closing. “Having two and three-year-old toddlers, it was full-on. But you do what you can every day to keep them entertained. We recently drove for 13 hours, a great way to quarantine, to the farm I grew up on. Although, we did wait weeks to travel anywhere. The kids got to run around on the farm, so I'm glad we made the trek.”

Country at Heartwill be telecast Saturday, October 3 at 9 p.m. on Hallmark Channel.