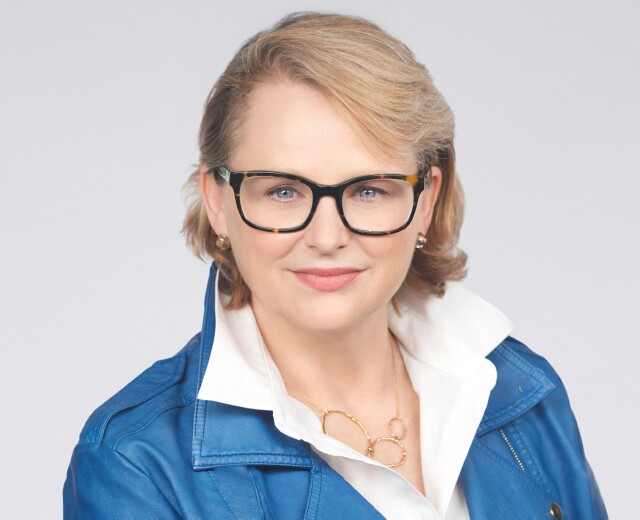 Laura Nelson was a news enthusiast as a kid.  She'd read the paper with her father and wonder how she could be part of that -- without being a reporter.  "I've always been intrigued by how people consume and digest information, the impact of it," Nelson told me during a recent interview.  Communication, in other words.

Nelson grew up to be Chief Communications Officer at Nielsen, a post she's held for the last five years.  Those five years have seen a sea change in the TV measurement business and in how women are treated in the workplace.

Nelson got her professional start in TV doing comms at Comedy Central back when it was owned by both Viacom and HBO, and she recalls "definitely needing a thick skin in some of those writers' rooms."  But overall, she said, leadership was supportive and fairly gender-blind.   After leaving Comedy Central for a position at Oxygen Media, though, Nelson got a peek at what it looks like when women run the show.  "That was when I was having my first child," she recalled, "and it was an incredibly warm and welcoming place to be a mother for the first time.  There was a line backed up for the mothers' room around pumping time."

This was all pre-#MeToo.  Now?  "I think there's a cultural shift that needs to happen everywhere, no matter how supportive your individual boss is," she said.  "I've seen it all -- some of it has happened to me -- and I think the more pervasive problem is less sexual harassment and more dismissing women, talking over them, not allowing their voice to be heard."

As companies begin to realize exactly how pervasive their gender imbalances are and how bad for business that is, Nelson has been pleased to see how many of her male colleagues have come to her asking questions about it all.  "I think most men are curious if they're part of the problem," she suggested.

For Nelson, codes of conduct are as simple as a meme.  Literally.  "I saw this incredible meme about Dwayne 'The Rock' Johnson.  Would you say that to The Rock?  Would you approach The Rock that way?  Treat all women as you would treat The Rock," she explained.

"The great thing about the media business is that it’s really welcoming of women," she added.  Nelson serves as the Global Leadership sponsor for the Women in Nielsen Employee Resource Group, advising women to take control of their individual careers and, if they feel they're in a work situation they need to leave, to leave -- but to make sure to talk about the issue in their exit interview in the hope that the company will address it in the future.  It’s a variation on the "leave your campsite better than you found it" approach to life.  "Whether it's gender inequality or a pay gap, you own your own career.  I tell women, 'Everything is a data point,'" Nelson said.

And nowhere else in TV is data quite as important as at Nielsen, the third-party ratings measurer for just about every network that matters.  Nielsen has occasionally served as the TV industry's whipping boy -- or, as Nelson likes to put it, sometimes the players in the TV game take out their frustrations on the referee.  "As viewing proliferates across various matrices and platforms, the ability to count it all in a way that's representative of the entire U.S. population is more and more important,” she asserted.  “We are focused on metrics to monetize."

But even with as lengthy a background in communications as Nelson's, it can take a Herculean amount of time and effort to properly explain how she does just that.  "In some cases, we're talking about really deep technology or data science, so we need to do deep education that doesn't just sound like buzzwords," she said.

Her team, she added, has certainly risen to the challenge.  "As the brilliant Megan Clarken [Chief Commercial Officer] likes to say, ‘Measurement is a team sport,’” Nelson noted.  "We all have to lock arms if we're really going to understand our viewers and consumers going forward."