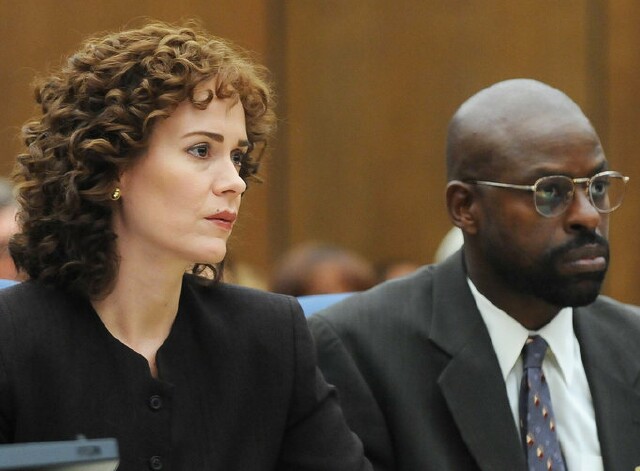 After a few years of processing TV junk food in the form of FX’s American Horror Story and Fox’s Scream Queens, the Ryan Murphy who brought us HBO’s The Normal Heart and Fox’s Glee (during its first two seasons) returned in thrilling top form as executive producer of the FX limited series The People v. O.J. Simpson, one of the major television triumphs in recent memory. It will likely be referenced and referred to for decades to come in the same way we still talk about such classic minis as Rich Man, Poor Man, the original Roots, The Thorn Birds andBand of Brothers, to name only a few of the greats. Given the escalating and disheartening social unrest America has suffered in recent years, the timing of this profound program couldn’t have been better. The same holds for ESPN’s illuminating documentary series O.J.: Made in America.

This two-pronged, all-encompassing crash-course in the life and times of football legend, actor and broadcaster O.J. Simpson forced those of us who remember the horrific double murder of Simpson’s wife Nicole Brown Simpson and her friend Ronald Goldman and the overlong, racially divisive trial that followed to reflect upon and reconsider our memories of the madness of it all, especially as it played out in the media.

The People v. O.J. put the lives of everyone involved under a microscope, meaningfully transforming many of them from Tonight Show punchlines and crude comedy fodder (as they had come to be known) into emotionally complicated, flawed but compassionate human beings. This was especially true of prosecuting attorney Marcia Clark, who was eaten alive by the press throughout the trial. (Funny how it took a script to do something that mainstream news coverage never did. I guess there were serious issues with the media long before this year’s presidential campaign.)

Sarah Paulson’s extraordinary portrayal of Clark did much to alter twenty-year-old perceptions of her that were still fresh for millions of people. It was the performance of the year. Two other performances stood out: Courtney B. Vance as Simpson’s bombastic defense attorney Johnnie Cochran and Sterling K. Brown as Christopher Darden, Clark’s partner in building a case against Simpson -- one that ultimately met with failure. (Paulson, Vance and Brown all received Emmy Awards and other honors for their work.)

The Simpson courtroom drama is widely regarded as the murder trial of the last century, coming in just under the wire before the turn of the Millennium.  Similarly, The People v. O.J. Simpson is the limited series of this century, at least so far.

It is no small praise to note that ESPN's expansive O.J.: Made in America is just as compelling as its scripted counterpart, having simultaneously reminded us all of who the man was before we came to regard him as a monster while also shedding light into some of the shadowy corners of his life that went largely unknown during the peak of his global popularity. Congratulations to director Ezra Edelman on an extraordinary achievement, taking one of the most disturbing events in modern American history and finally putting it into proper context two decades later. It is an invaluable document for those who know Simpson only from the double-murder and subsequent trial, making clear that there was always much more to him than any of us knew, and that said ignorance kept us all in the dark.