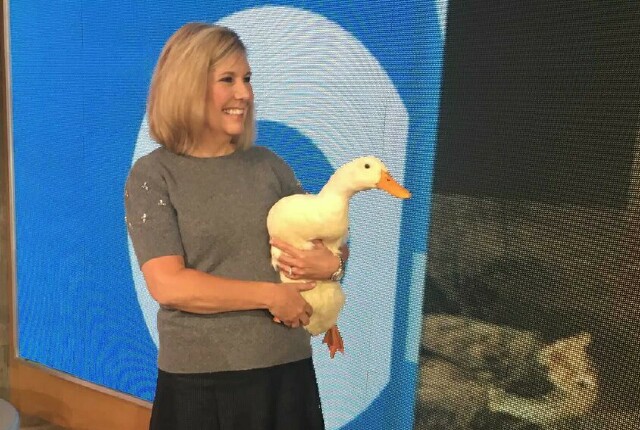 If it looks like a duck, and quacks like a duck ... it must be AFLAC.  Episode 8 of Insider InSites is a conversation with Gail Gallupo, Senior Vice President and Chief Marketing Officer of Aflac on building and protecting an iconic brand symbol, and a unique tie-in with other well-known water fowl: Disney|ABC Television’s DuckTales!  Gallupo (pictured at top with that iconic brand symbol) speaks with E.B. Moss about her own path to CMO, recommendations for others, and her vision for elevating Aflac Duck and the company mission overall.  (The transcript below has been edited for clarity and length.  To hear more about Gail’s 11 patents, her development of gamification and the causes Aflac supports, listen to the entire conversation here, through our player below, on Stitcher, and consider subscribing to all our Insider InSites podcasts on Apple podcasts).

Gail Gallupo:  Yes, we had an amazing day -- launching a partnership between Disney|ABC’s DuckTales and Aflac, as well as Spark Foundry.  It was an exciting time.

Gallupo:  It’s an amazing company, founded by three brothers over 60 years ago with a great entrepreneurial spirit -- visionaries that built an insurance company to help people in a time of need, but to preserve their lifestyle.  I am honored to be able to bring this idea to a whole new level in 2017.

Moss:  There are a lot of challenges facing CMOs now. How do you stay current?

Gallupo:  I work with people like Spark Foundry and their innovation lab.  I also have a muse.

Moss:  Like a digital native muse?  I’ve heard that's the way to go.

Gallupo:  No.  She's been with me for over 20 years and is one of the most creative people I've ever met. So together we stay on top of trends, constantly reading and being very engaged in the startup community.

Moss:  You have 11 patents and also started BankersLab which uses gamification to educate financial services employees.  With the big trend now for CMOs to have to be CTMOs do you think everyone needs to be as right brain/left brain as you?

Gallupo:  A great question.  To be CMO if, let's say, you are very creative/right brain, you want to make sure that you are able to serve your customers, so surround yourself with the people that have the skill set you don't have, to know everything and complement the areas that you might not be the most knowledgeable in.

Moss:  Aflac has a reputation for surrounding itself with good people as well.  Some of the accomplishments even in the year you've been there:  Fortune named it a Top 100 place to work for Millennials; Ethisphere named it one of the world's most ethical companies, and it was recognized as a diverse company by Black Enterprise and Latina STYLE.  These are really important considerations for your human capital especially with Millennials and Gen Z’ers focused on socially responsible companies.  So how do you tout those important aspects to the consumer?

Gallupo:  It’s not about touting.  It's about providing brand [experience] or walking the talk.  That's what Aflac does.  Our consumers don't want another big company touting that they're the best at this ... or getting all that bravado out.  They want somebody who can connect with them, knows them and speaks to them.  It's really our actions that have helped us get those awards.  We have an amazing CEO, Dan Amos, who was listed as one of the top 100 CEOs worldwide.  He is a marketer at heart and everything he does is with the heart.  We follow his lead and we are, what we call at Aflac, "caring innovators."  We care for our policyholders and will go out of our way and put something in place even if it might not be the most financially sound move for us.

Moss:  There's a history of confusion around what Aflac does.  As I understand it, you're the largest provider of supplemental insurance in the United States.  We all know the sound of Aflac duck; how have you moved the company to have people understand what Aflac is versus the knowing the sound of its name.

Gallupo:  Even today there are people that don’t know what “supplemental” or voluntary insurance is.  They think, “I don't need it because it's voluntary” but it’s quite the opposite. They really do need it.  I've set as a mission with my team to drive that understanding.

So, with Publicis Seattle we launched a new campaign to really get at what are the lasting effects of injury or illness and how this can impact your life and what we want to do is we want to advocate for a healthy lifestyle.  We don't judge people.  We don't say, ‘Well you shouldn't do that and you should save for this.’  We just want to make sure that they understand that they have an opportunity to protect that lifestyle by buying Aflac insurance.  A campaign we launched called The Ripple Effect showed that having an accident might change the course of your life.  We're trying to put it into language and scenarios that people understand.

Moss:  Publicishas been your agency of record for quite a few years and in fact helped originate the duck.  I think it was Kaplan Thaler about 20 years ago.

Gallupo:  Seventeen years this December that the duck was introduced. 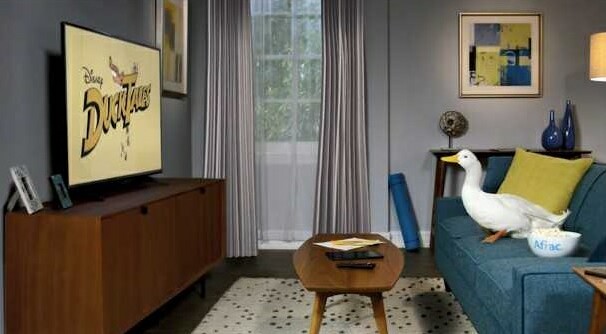 Moss:  So he's a Gen Z’er!  And now we're here at Spark Foundry because of another way to communicate the brand message using the Aflac duck.  Yesterday was the premiere of your newest sponsorship with Disney|ABC Television.  And it was with Disney XD.  Tell us about that.

Gallupo:  We're so pleased to be able to partner with Disney|ABC on their new series revival, DuckTales.  It's the 30-year anniversary of [those] beloved characters and we felt like this was amazing synergy in terms of what we stand for at Aflac:  The idea and activities or adventures of the characters in DuckTales.  Anybody who grew up in the ‘80s is so attached to the series.  This is a fantastic show and to integrate the Aflac duck as the Aflac duck really does symbolize this idea of having adventure experiences and protecting your lifestyle so you can live the life you love.

Moss:  Describe the creative the campaign.

Gallupo:  Spark and Disney ABC did an integration with Good Morning America. Aflac Duck was on the show with Ginger Zee who is a huge fan. 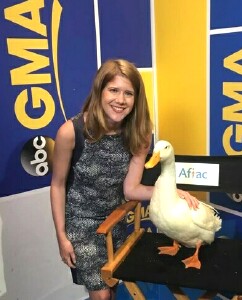 Then they took the duck shopping at the Disney flagship store here in New York.  (MediaVillage's Charlotte Lipman is pictured at right with Aflac Duck.)

Moss:  You’re not running an Aflac spot within DuckTales so much as you're the sponsor of it -- and then he is incorporated into the animation.  To describe it, it’s the actual duck sitting and watching DuckTales... and then in his little mind's eye he is transported into an animated character among them  and hangs out with Huey, Dewey and Louie.

Gallupo:  That's right.  Disney actually did the animation.  He was a natural fit.  The commercial introducing DuckTales and showing Aflac as a sponsor aired for the first time during GMA and the audience went wild.  Everybody was singing the DuckTales song and incorporating Aflac in the song.

Moss:  How did this idea come about?  Did all three entities sit together at the table and brainstorm? Did Spark Foundry bring it to you, or did Disney say ‘Hey have we got an idea for you’, because those guys have an amazing integrated marketing team, too.

Gallupo:  Absolutely.  We have a great relationship with Disney ABC through Spark, and Disney actually approached Spark and talked about this revival of DuckTales.  We were interested in a partnership because we felt like the brand stands for so many things that Disney stands for, as well as specifically the DuckTales story and characters.  Then it was a collaboration session to see how we bring this to life.

Moss:  Do you ever get jealous of the success of the duck?  Because I have to say,@AflacDuckis kind of beating the time of @Aflac by about two to one in Twitter followers.

Gallupo:  That's the strategy.  We are lucky to have a timeless icon.

Moss:  You said you have to be kind of picky about where Aflac duck appears.  There are certain lizards in the world of commercials that appear everywhere.  So, he's been in the movie Up, he's been on the red carpet at the Grammys and now on GMA.  What are the limitations?

Gallupo:  We really are a family oriented brand.  And for that we aren't going to put the duck in any provocative or risky situations; it's a family icon. It will appear in more family oriented shows like on Disney|ABC.  We're now doing cinema advertising and we're very particular about which shows and previews that the duck will appear in at theaters.  You'll never see him [with a] R-rated movie.

Moss:  That's interesting because there are a lot of brand extensions happening now with cinema advertising as well -- trying to take it online and follow the consumer.  What are the other media extensions that you're looking to embrace?  For example, we're in the golden age of audio and you have such a memorable sonic brand.  How much are you embracing audio orsmart speakers?

Gallupo:  We're definitely piloting with all the new technologies.  We feel that there are opportunities with [smart speakers] and personal assistants ... with beacons and being able to send messages to a mobile device and communicate to where folks are.  And then also chat: with Facebook Messenger having over 1.2 billion active users, and WhatsApp, we feel very strongly that this is going to be something that's an opportunity to get into a natural conversation with a consumer.

Moss:  What is your projection for how you might move the brand forward?

Gallupo:  My team is introducing a new brand strategy to show people that it's just as important to have medical coverage as supplemental/lifestyle coverage -- and bring this up from kind of a secondary to an equal-to medical coverage.  So that's big for us.  And, as I mentioned, it's not just all about advertising to a consumer.  It’s about engaging and driving a brand act.  It’s not innovation for the sake of innovation, because every new tech company is running out there and doing stuff.  What we do is “purposeful innovation” so we're very purposeful about what we innovate, and how we and where we bring this to life through the brand experience with more and more fantastic integrations like we had here with Disney|ABC and DuckTalesand with Spark Foundry, where it makes sense for our consumers and makes sense for us to get our brand out there.