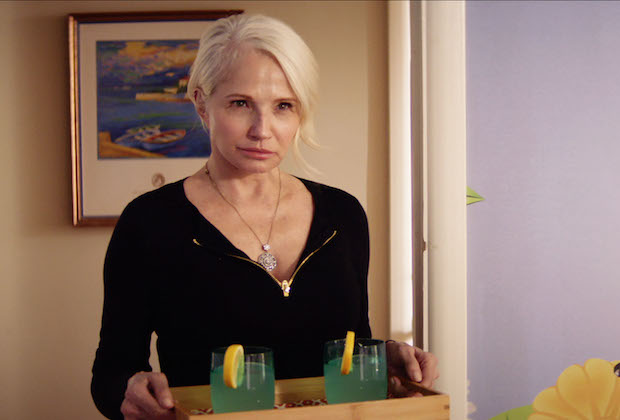 We lost a real one, y’all.  Another great gal in a long line of TV’s most ferocious females has bitten the proverbial dust, and the impact of her passing can be felt around the interwebs.  Is her demise yet another instance of television’s most noteworthy criminal masterminds getting their just desserts, or is it just more evidence that our favorite fictional females constantly get the short end of the stick?  Either way, she’s not getting any more Mother’s Day gifts.  Raise a gun-toting, bleach blonde glass for the manipulative matriarch herself, Janine “Smurf” Cody, played with great grit and gusto by the inimitable Ellen Barkin.

This past Tuesday, TNT’s Animal Kingdom fans witnessed the gunshot heard ‘round the world, and the bullet came from J’s (Finn Cole) gun.  After being diagnosed with cancer last year, this season seemed to be somewhat of an extended send off for our menacing matriarch, albeit a clunky one, mainly because of our introduction to young Smurf a.k.a. Janine, played by Leila George.  This season we seemingly spent about half of our Smurf time in the past, as we followed Janine on her formative journey from thrill seeker to full on bank-robbing badass.  The other half of our time was spent with present-day Smurf, sort of silently sending herself off.  She disappeared for a long while, and then she returned, abruptly and without explanation.  She threw a big ass party, cleaned her house, took her last looks and then casually attempted suicide by gunfight.  Unaware of what she was attempting, Pope (Shawn Hatosy) saved her, thwarting her plan, at least until she came clean and straight up begged the boys to do her in.  After some pussyfooting around, J finally stepped up and pulled the trigger, both literally and figuratively.

Smurf falls into a specific category of female badassery that for me includes the likes of Claws’ Desna Simms (Niecy Nash) and Weeds’ Nancy Botwin (Mary-Louise Parker).  I’m talkin’ characters like Westworld’s Maeve (Thandie Newton), Marvel’s Jessica Jones (Krysten Ritter) and Game of Thrones’Cersei Lannister (Lena Headey).  These are women who aren’t really concerned with things like the law and morality, and honestly, who needs that stuff anyway?  These ladies are enterprising, fearless, and are often the smartest people in any room.  They are as-beautiful-as-they-are-dangerous mama bears that have no problem getting their hands dirty before they get their nails done.  Smurf was one of these women, and while her motives were often selfish, and she operated with little to no regard for the mental and emotional well-being of her sons, she still got shit done.

Young Janine does a lot to sell this concept as well, as her story influences present day Smurf, just as I assume Barkin’s performance influenced George’s.  In the flashbacks we’re shown a Janine who is learning how to deal with a group of career criminals first-hand.  We watch her slowly morph from a ride along, to an equal, to the team leader, and while her ability to manage male temperaments was surely at play here, I believe her true strength was never staying the victim.  Even when she was down -- and man, was she down sometimes – it was never for too long.  She was a survivor, dammit, just like Desna, Nancy, Maeve, Jessica and Cersei.  (Well, maybe not Cersei, but you get the point.)

This may be the problem with Smurf’s exit.  She was given the opportunity to really go out on some #Ladyboss level, but then the writers doubled back for some reason.  Women like Smurf and the rest of the previously mentioned characters remind me of the line in Titanic, “A woman’s heart is an ocean of secrets.”  I feel like it’s foolish to ever truly think we know everything about these women (or any woman, for that matter) and their motivations, or what they plan to do next.  Smurf didn’t become Smurf by being bad at executing plans, keeping secrets, or manipulating people, so why wasn’t she able to pull off the death she wanted?  Was it so that the writers could force this complicated and nuanced character to just tell us exactly what she really wanted, instead of letting us find out as the boys would have, after the fact?  I hope not, because that’d be pretty lazy.

I get not wanting to die a slow and undignified death via cancer, because literally no one wants that, but her dying in the middle of a glorified tantrum after four years of unbridled, cold-blooded calculation just feels … disrespectful.  Of course, she was scared, the same way that Walter White probably was, but Heisenberg got to go out on his own terms, not begging for someone to help him.

Animal Kingdom has been renewed for a fifth season.  So the big question now is, will the show work without Smurf?  Perhaps the season four finale this week will clarify such concerns.  Barkin herself has recentlyliked a number of tweets that were critical of how Smurf’s death was executed, possibly indicating that she feels like it won’t, like many of her fans.

I’m not sure myself, but as Barkin put it on Twitter, “Next episode Smurf’s will is opened.  She left her boys a hit TV show.”

Animal Kingdom is telecast Tuesdays at 9 p.m. on TNT.