Roseanne's Resurgence: It's the Economy, Stupid 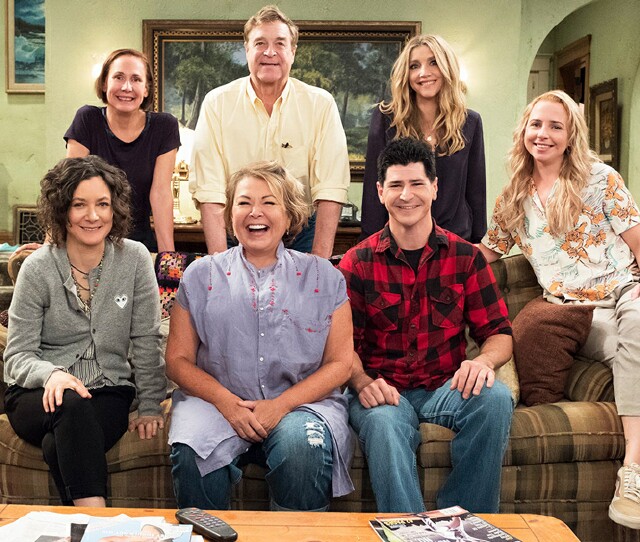 How to explain the mammoth success of ABC’s Roseanne revival, with the audience for its one-hour, two-episode premiere now climbing past a breathtaking-for-broadcast total of 25 million viewers?  Try this: “It’s the economy, stupid.”  Well-written scripts don’t hurt, either. Millions of people don't stick around to watch lousy shows, regardless of their economic status or political beliefs.

Does this broadcast bonanza have anything to do with President Donald Trump or his "fan" base?  I don't think so.  Remember, Roseanne was often the biggest and, at times, best thing on television during the presidency of George H.W. Bush and the first term of President Bill Clinton, when an ever-deepening recession ravaged much of the country.  Trump hadn’t even found his way to television yet.  Then as now, the economy was crushing the life out of the working poor, not to mention the flat-out impoverished, all of whose numbers are currently growing.  When Roseanne first rolled around, people responded to seeing characters just like themselves on television and being able to laugh at the same time.

Laughter is still one of the best medicines, second only to a massive influx of cash.  Just ask the harried Heck family on ABC’s other comedy about people with no money, The Middle – a consistently hilarious truth-based sitcom which has lasted an impressive nine seasons without benefit of media fawning, award-show glory or even a passing reference by President Barack Obama or President Trump.  The Hecks may be kinder than the Conners, but the two families are more alike than they are different, struggling to make ends meet in flyover country and bonded by the great class identifiers that cut across race, religion and gender preference, including minimal income, deep debt and ever-present financial stress.  They are the folks most television writers care to not write about or, to be blunt, think about.  That's why so many "average" families and "struggling" young singles in sitcoms live in houses and apartments straight out of Better Homes than Your's magazine.

Trump plays to this.  So does Roseanne – the actress and the character – both staunch supporters of his.  Roseanne Barr grew up poor, and I have always believed that she is sincere when she speaks out on behalf of her people, even if she made hundreds of millions of dollars off the original series.

It’s been over 25 years since James Carville, then a valued advisor to President Clinton, brilliantly and succinctly clarified the reason why people win elections when he made the declaration quoted at the top.  People want to be able to pay their modest bills, keep a modest roof over their heads, eat three modestly satisfying meals a day and make sure their families are cared for.  These realities have befuddled creative people working in television since the ‘70s, when shows like All in the Family, Sanford & Son, Good Times and even lightweight fluff like Laverne & Shirley that represented the working class and the working poor were huge hits.  The all-encompassing if startlingly limited genre dates back to the Fifties with The Honeymooners, an all-time classic, and also includes the current FX comedies Atlanta and Baskets.  (In the former, characters commit crimes to eat and pay the rent.  In the latter, Mother Baskets lives for her trips to Costco.  Need I say more?)

I believe the resurgence of Roseanne has more to do with the reality of the economy than with politics. The stock market may be up, as Trump likes to remind us, but you got to be in it to win it, and most Americans are not.  That’s because the majority of the population in this country live like the Heck and the Conner families do, or the way the Bunker and Evans families did.  Roseanne Barr has spoken out about this since way back in the late Eighties, when the original series was largely devoid of overt political leanings, and even in the last decade, when she was promoting its release on DVD.

She was at it again a couple of weeks ago on the Jimmy Kimmel Show, in what turned out to be one of the most entertaining hours of television on any network this year to date.  She stopped the show cold several times, whether dropping f-bombs; exclaiming that as an American she does not want her president to fail; asserting that a President Pence would be much worse than a President Trump; insisting that her politics are the same as always and that it is everyone else who has shifted one way or the other; dissing Hillary Clinton, or flipping Kimmel the bird.

Nobody expected the first two episodes of what is now known as Season 10 to perform as they did, though it is clear Roseanne and her co-star Sara Gilbert, both executive producers, felt the time was right to revisit their fictional family.  The instant outsize success of Roseanne reminds me of the debut of ER on NBC way back in 1994, when hour dramas were in serious decline.  (The medical drama, revolutionary for its time because of its fast-paced storytelling, exponentially exceeded everyone’s understanding of what a scripted broadcast network drama could do at the time.  Its ratings went through the roof.)

But this success story really isn’t all that surprising, because as Roseanne suggested to Kimmel when she said “I’m still the same. You all moved!,” life as it is lived by the cash-strapped masses hasn’t changed since her show began 20 years ago.  Roseanne hasn’t changed much, either.  The cast is still first-rate, the scripts as bitingly real and relevant as those of All in the Family decades ago.

Carry on, Ms. Barr.  Your public is waiting and it's not going anywhere, in more ways than one.

Roseanne is telecast Tuesday at 8 p.m. on ABC.