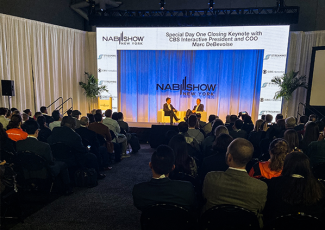 Station group executives speaking at last week’s NAB Show New York appear to be taking a cue from the advice given to advertising vice president Martin Sloan, the main character of Walking Distance, a classic early episode of The Twilight Zone:  It’s best to look to the future.  Instead of dwelling on today’s rapidly declining broadcast viewership, they are looking ahead to a future of revenue-generating deployment of Next Gen TV (the new moniker for Advanced Television Systems Committee 3.0 transmission) and other advanced TV ventures.  Or, as Dan Mellon, sales transformation vice president at Sinclair Broadcast Group, declared during one panel: “Television stations, for the first time, will have an innovation platform with a lot more channels for all sorts of services [and will] deliver different options to advertisers.  The opportunity will only be limited by ourselves and who we deal with.”

Mellon and J.W. Linkenauger, Sinclair’s vice president of advanced advertising support operations, see 2020 as ground zero for a mass Next Gen TV rollout among consumers nationwide.  Some research agencies predict that up to 61 percent of all TV households (and at least the top 40 markets) could have Next Gen TV channels and capabilities available to them by the end of the year.  Those capabilities include a universe of additional programming services, interactive content, advertising, product/service purchasing and emergency alert notifications.

“It’s a mix of linear and digital TV,” Linkenauger explained.  “If you’re creative enough, viewers will latch on to 3.0 as they’re currently doing with smart TV sets and connected devices.”

The sooner station groups prep their local content, advertising sales and technology resources for Next Gen TV — as well as create and circulate shows or services via smart TVs and devices such as Amazon Fire TV, Chromecast, and Apple TV — the (quicker and) better they will make out next year and beyond.

Ed Busby, Tegna Group’s senior vice president of strategy, encouraged advertisers to expand practices already in play for the targeted advertising game plan.  “We have to use these technologies to adapt to the 3.0 world,” he continued.  “This is really one slice of the addressable pie that’s coming to the marketplace.  Things will become more complex as more people bring pepperoni to this addressable pie.”

Linkenauger advised individual stations and station groups to monitor new smart TV set/device applications, including the incorporation of 5G technology with a number of smart set models before the end of the year. With the added bandwidth 5G makes available, “there’s a whole other opportunity there,” he said. “You can create hyperlocal content and send emergency alert information to specific neighborhoods.”

As far as drawing major advertiser support for Next Gen TV–circulated services, there was a general agreement at Linkenauger’s panel that using first- and third-party viewership and demographic information will be essential. “That data will put us on an equal playing field with everyone else when it’s a fight for eyeballs,” Linkenauger said. “It’s a fight, [and] with help from quality local programming and journalism, we can win.”

Another word to the wise among station group executives: Don’t depend on just Next Gen TV to thrive in a transforming media environment.  Given that 75-80 percent of all U.S. households now possess a smart TV set or device and collectively watch upwards of 10 billion hours a month of content and applications through these products, it’s time to be a content and ad sales player inside that universe, Gray Television digital sales director Erin Overstreet advised.  (On the national level, Gray oversees Investigate TV, a 24/7 gallery of investigative news coverage, inherited when Gray acquired Raycom Media last year.)

“It’s a natural progression,” Overstreet asserted.  “More people are streaming content; so are more advertisers.  If you’re not, you should buy a Roku and test it out.  Smart [products] make TV sexy again.”

For some station groups, that progression includes multiple simultaneous distribution points for content, involving smart TV products, cable, multicast and Next Gen TV.  Podcast versions of some content delivered that way can turn into another ad-supported vehicle.

E.W. Scripps already has that option going with Newsy, its Millennial-minded news channel.  “It’s a great springboard for us,” said Tom Sly, vice president of digital revenue for Scripps.  So is the company’s collection of multicast channels developed under its Katz Networks unit, including Bounce TV and the reboot of Court TV.  Bounce TV’s success over the past decade has given birth to smart TV–distributed spinoff Brown Sugar, while Court TV’s run the last half-year provoked Katz into rebranding another multicast channel as Court TV Mystery.

“[There are] more opportunities ahead,” Sly concluded.