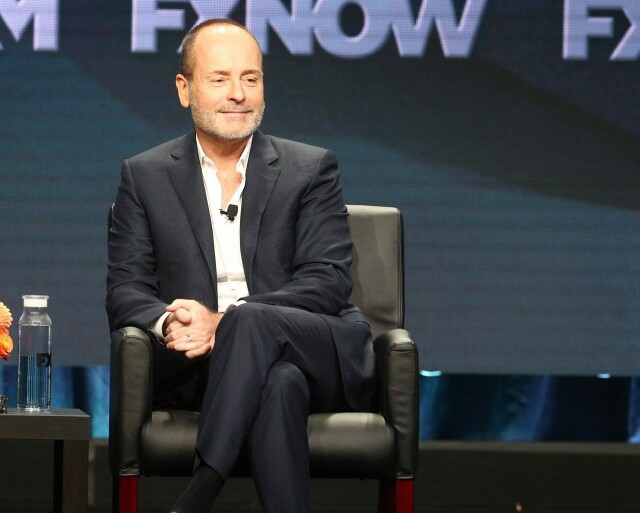 Beverly Hills, CA -- The Summer 2018 Television Critics Association tour has been a good time for FX Networks, first with its successful presentations on Friday, which as always filled the Grand Ballroom at the Beverly Hilton Hotel (the home of this tour), and again on Saturday, when for the third consecutive year FX was honored with more TCA Awards than any other network or streaming service at the organization’s annual ceremony celebrating the best in television.  Awards went to The Americans for Program of the Year and Outstanding Achievement in Drama, to its star Keri Russell for Outstanding Individual Achievement in Drama, and to The Assassination of Gianni Versace: American Crime Story for Outstanding Limited Series or Movie.

FX Networks’ CEO John Landgraf continues to stand out among a shrinking number of top network executives who frequently acknowledge the role that critics and reporters play in generating awareness of shows and the overall value of their coverage.  “I will reiterate that a television brand like FX, which aims to make every show we program good and worth watching, truly needs you, the critics, to help audiences navigate towards what’s best in television rather than simply the most convenient,” he said at the top of his session on Friday.  That has a lot to do with what can only be described these days as content overload.

For some time now Landgraf has included in his remarks to the TCA valuable updates on the ever-growing number of television series being produced.  Friday he provided a mid-year update.  “Three hundred and nineteen scripted programs have been released so far in the U.S., up 5% from the 305 that had come out by this time last year,” he began.  “Basic cable’s tally is down 11% from 114 to 102.  Broadcast’s tally is down 5% from 120 to 114.   Streaming television’s tally is up 46% from 52 to 76.  And premium cable’s tally is up 42% from 19 to 27.”

Also adding value to his session (something not all network presidents are known to do), Landgraf made several programming announcements, including a ten-episode limited series production of the classic novel (and broadcast miniseries) Shogun that will tell the story from multiple Eastern and Western perspectives, and FX’s first ongoing docuseries, The Weekly, produced with The New York Times and Hulu, which will “take viewers into some of our world’s most compelling and surprising stories, along with the journalists who investigate and report them for the Times,” he said.  Each edition of The Weekly will stream exclusively on Hulu beginning the day after it premieres on FX.

Landgraf also provided details of the upcoming fourth season of Fargo, which will star Chris Rock in the story tensions between two criminal syndicates in 1950 Kansas City, Missouri.

The elephant in the room, of course, was the upcoming acquisition of Fox by The Walt Disney Company, which Landgraf first addressed in January at the Winter 2018 TCA tour.  “I don’t know much more than you do, but I can read the public comments of Disney,” he said.  “Part of the logic of this transaction is to scale up their own streaming services.  I think one of the things that’s driving this extraordinary level of investment in television content and other forms of content right now is this kind of epic battle between various now very large companies that are going to be competing in the streaming business.  As long as that competition is red hot and as long as those services are scaling up, there’s likely to be a fairly substantial, increasing investment in scripted content.

“You’re going to see a lot of continued profusion in content, and as I’ve said before, that worries me,” he continued.  “I once said to this group that I thought there was too much television.  Actually, in many ways, that’s too narrow.  I think there’s too much story.  There’s too much narrative.  The profusion of stories is very good if you want to talk about innovation and diversity, which I think are very important values, but I think it’s very hard if you’re talking about trying to surprise and delight the audience, because they just have [access to] much more [content] than they can ever consume in a lifetime, and everything seems vaguely familiar to them.  That’s something that we struggle with a little bit.”

Landgraf pointed out that regardless of the seismic shifts in the consumption of scripted content “live TV is still overwhelmingly the most consumed form of television in the United States, and most of that happens through channels.  Streaming services really haven’t made much of an impact on live TV, but they’ve made a substantial impact on scripted TV, both in terms of making their own scripted programming and in terms of where people watch scripted content.  So just as you can see Amazon and Netflix and other streamers scaling up their efforts, you can see AT&T buying Time Warner and deciding that Time Warner Media is going to be a part of AT&T’s efforts to scale up its streaming efforts.”

Regarding FX wanting to explore new programming genres, as it will do with The Weekly, one critic asked, “Over many years, you’ve spent a lot of time and effort to kind of cultivate a certain FX feel ... do you want to keep that?  How far from what you do now do you want to go?  Are you thinking about certain genres first, and how much of it is related to the Disney acquisition when you think about this?”

“I would relate it to a debate that [happened] publicly after a town hall between [WarnerMedia CEO] John Stankey and [HBO Chairman and CEO] Richard Plepler was reported,” he continued.  “Stankey was saying that HBO is going to have to get bigger, and that raised a lot of questions about will that dilute the brand?  One thing I will say is I’ve seen a lot of activity at HBO.  I’ve seen them announce a lot of new shows.  My guess is they had those shows in development and they were sort of waiting for new marching orders from AT&T after the close.  They all seem like they would fit really well in the HBO brand.

“I find it very encouraging that [HBO’s] Casey Bloys comes [to TCA] and says, ‘We’re not going to change the basic nature of what HBO is.  We’re just going to try more things.’  You can’t get infinitely bigger without diffusing the brand.  I mean, I certainly admire much of the really good programming that Netflix makes, and you can’t not admire the fact that they got the most Emmy nominations of any service this year; 112, to HBO’s 108.  But I would also say that their business model is to be all things to all people, right?  We’re going to make, as much as possible, everything every human being would ever want to watch everywhere on planet earth.  In the context of that, they’re making the kinds of programs that HBO makes, the kind of program that FX makes, but they’re making all kinds of other programs, too.  And I just don’t see that as our role.  I don’t see us as trying to make the same programming as a broadcast network or a network that is primarily focused on reality programming.  I don’t think you’re going to see a competition reality program on FX, or a structured reality program.”