The CW's “Batwoman” Is Badass, and Getting Better with Each Episode 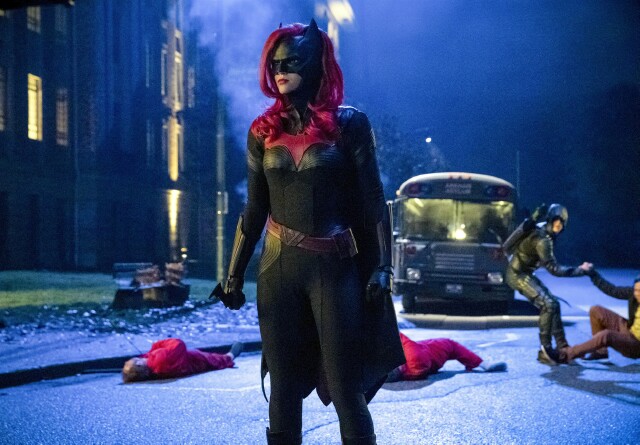 When it comes to Batwoman, both the iconic character and the new show on The CW, there’s a lot -- almost too much – to talk about.  Her recent arrival on our screens has been divisive at best, and her history is a storied and complicated one, not only for entry-level fans of the series, but for the diehards as well.  So, let’s talk about who our newest major addition to the Arrowverse really is, and more importantly, whether or not her new show is worth a watch.

I’d describe Batwoman as The Dark Knight meets Gossip Girl, which I mean in the best way possible.  It’s all there, including a GG-style voiceover character, journalist Vesper Fairchild (MSNBC’s own Rachel Maddow), who with much snark bookends most episodes by being unfairly critical of (and occasionally sexist toward) the titular hero.

So, we all know who Ruby Rose is, but who is Kate Kane, the woman behind the mask?  Well, first up, she’s not Batgirl.  Yes, there’s a difference.  Batgirl is Barbara Gordon, Commissioner Gordon’s daughter, and neither of them are even in this show.  Kate is Bruce Wayne’s cousin, which isn’t some weak pitch blurted out by an intern; it’s Kate’s actual origin.  Apparently, both Bruce Wayne and Batman have been inexplicably absent from Gotham City for at least three years, and now Kate, having just returned from some sort of training from someplace overseas, finds herself -- quite easily, in fact -- in the Batcave, having discovered her cousin Bruce’s secret and hijacked his identity to boot.  This is literally the first episode, and not so coincidentally, that’s where the problems start.

My issues are not necessarily with the details of Kate’s origin, or even the characters she deals with (like Alice, the psychopath with a predilection for the prose of Lewis Carroll), who are fairly faithful to their comic book origins.  They have more to do with the delivery of her story.

The first thing I noticed were the visual similarities between this series and the Christopher Nolan Batman films.  Check this out: 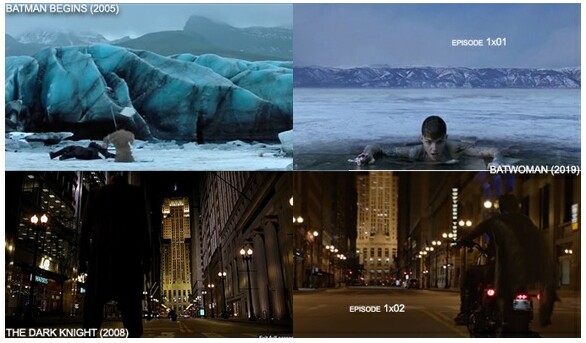 From the very Batman Begins-esque ice training sequence in it’s first episode, to the motorcycle ride through what appears to be the exact same set as The Dark Knight in its second, there are obviously some visual connections the show’s designers wanted us to make.  The issue is, Kate Kane’s origin is already pretty Bruce Wayne-y, and the visual similarities to a literal Bruce Wayne story make Ms. Kane feel like less of an original idea by comparison.

Not to overprove my point, but the same can be said for Alice, the baddie who’s been brought to life by CW alum Rachel Skarsten (the much-missed Reign).  Alice shares some very obvious similarities to the Joker’s psychopathy.  Both of their styles are born of bastardizations of innocent things meant for children (clowns, “Alice in Wonderland”), and the void where their personality goes is filled with murder and themed one-liners.  Being a female, however, means that her equivalent would be Harley Quinn, and that realization is most likely responsible for shots like this:

I mean, it’s right there.  So, is this a bad thing?  Not necessarily.  I know that all these connections are meant to make us feel like we’re somewhere familiar.  The problem, however, is that all these similarities could be mistaken for a lack of originality.

I like Rose as Kate, and I like Kate’s character.  I have my concerns, to be sure, but I see the appeal of a “Ruby Rose-type” in this role as well as this particular interpretation of the character.  Kane, who was originally meant to be a love interest for Batman in the comics, is now an out and proud lesbian in both the current comic and TV iterations, and that’s on top of being Martha Wayne’s rich ass niece.  Rose, a lesbian herself who’s always been vocal about her desire for more LGBTQ+ representation in the media, was definitely born for this kind of role.  But I think the speed with which Kate’s character went through the steps necessary to be the Bat made some of it feel unearned in the end.

We got one scene of training, with some unexplained rando as her sensei, giving the impression that, what?  Rich people just go on these “take me to the tundra and train me” trips all the time?  Doesn’t matter, she’s home now, in a Gotham we all know, breaking into her cousin Bruce’s office with appalling ease and taking the news that her cousin is Batman, like, really well.  Then we meet Luke Fox (Camrus Johnson), son of Lucius Fox (Morgan Freeman’s character in the Nolan films), and apparently the only dude who still works in the now derelict Wayne Enterprises building.  What's up with that?  The questions come fast and furious.  Why isn’t Luke better at keeping Kate out of the cave?  Nepotism or not, if he ended up as Bruce’s assistant/”R&D Guy” wouldn’t he be better at things like keeping Batman’s secret?  Also, tiny gripe, but why is the Batcave in Wayne Towers?  It’s supposed to be under stately Wayne Manor.

Honestly, we haven’t even gotten to the stuff about Kate and Alice being sisters, or the horrifying kidnapping story that that turns into, or Kate’s glossed over “I hate vigilantes” thing, or the fact that Batwoman’s actual debut was over a year ago during The CW's Elseworlds crossover, which makes everything taking place on the show now actually in the past, even though this season’s finale is the second episode of the long awaited Crisis on Infinite Earths crossover event, which hasn’t happened yet, and -- *deep breath* -- it’s a lot.

Despite all that, though, I have stuck with Batwoman from the start, not out of loyalty to the brand or the character, not because it felt like a Gotham I recognized, and not because Ruby Rose is cool as hell (which she is).  It’s because there is a show in there that I really want to see, and in every episode, I see a little more of it.

Batwoman is telecast Sundays at 8 p.m. on The CW.