"The Good Place": No Sophomore Slump for This Forkin' Good Show 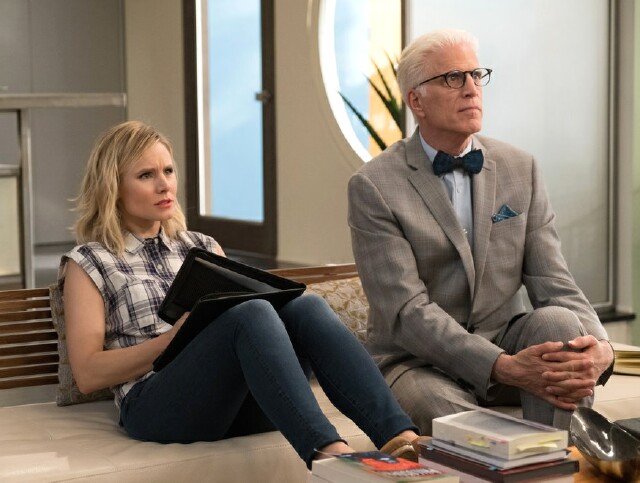 Everyone’s got their own ideas as to what an afterlife may look like, but no one’s concept of the hereafter is more entertaining than that of Michael Shur, the genius creator behind NBC’s popular comedy The Good Place.  This show has balanced a heavenly combination of hilariously clever writing, perfect comedic timing and stimulating philosophical thought throughout its first two seasons.  Honestly, its ability to do so is the only evidence I’ve had as of late that we haven’t all been in The Bad Place this whole time.

TGP follows Eleanor Shellstrop (Kristen Bell), a selfish soul who erroneously ends up in Shur’s version of heaven -- The Good Place -- where everything is peachy keen and cursing is literally impossible.  In Season 1 this little faux pas set off a chain of events that not only disrupted the afterlives of everyone involved, but threatened to land Eleanor in The Bad Place if she didn’t figure out how to become a better person before the truth came out.

In the Season 1 finale Eleanor discovered that she and her new friends -- Chidi (William Jackson Harper), Tahani (Jameela Jamil) and Jason (Manny Jacinto) – were actually in The Bad Place all along and were meant to spend eternity unknowingly torturing each other.  Adding insult to injury, it also turned out that the originally amiable architect of their “neighborhood” -- a being named Michael (Ted Danson, pictured at top with Bell) – is actually a demon and was using them to test his new type of torment.

As we have learned in Season 2, Michael has a superior named Shawn (Marc Evan Johnson), and Shawn has exactly zero faith in Michael’s little experiment.  In fact, he tells Michael that if he should fail again he’ll be “retired,” which is the equivalent of death for an otherwise immortal being like him, and the fact that Eleanor keeps figuring it all out isn’t helping him avoid that fate.  With his back against the wall, Michael does the unexpected and teams up with his four “victims.”  Now they all have to figure out how to genuinely better themselves enough to legitimately gain admittance to the real Good Place, and the only way they can do it is together.

The genius of that world-rocking twist was the complete 180 in Michael’s personality.  Up until that point he was very polite, accommodating and seemingly innocent.  Since his big reveal, however, he has become rude, pretentious and comically devious.  Danson’s ability to play both sides of this coin so perfectly has really helped to create a world that leans heavily on his talents.  I mean, I liked him when he was nice, but I love him now that he’s mean. 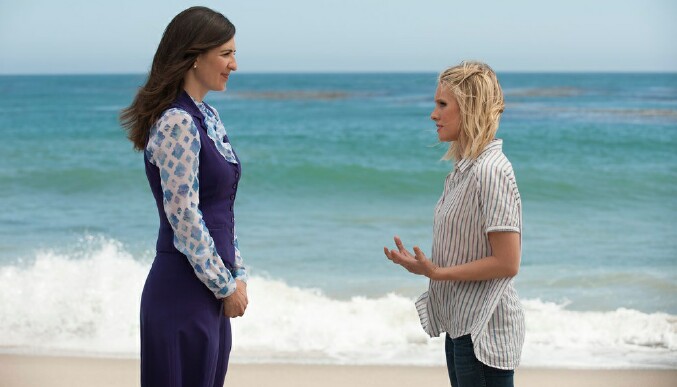 Speaking of characters that I love, I have to talk about Janet (D’Arcy Carden, pictured above, left).  She’s like a walking, talking Siri, or as Eleanor once called her, “Busty Alexa.”  Her one-liners, bits and interactions know no equal, and her almost childlike innocence makes that fact the she knows literally everything in the universe that much more amusing.  Even better is the fact that despite that knowledge human nature is something she’s still learning to get a grasp on.  Besides that, I’m especially fond of the apparent friendship that she and Michael share.  Independent of the fact that he is objectively evil, Michael somehow still has the capacity to value their relationship and appreciate her loyalty, adding yet another level of depth to his character.  (Read Steve Gidlow's exclusive interview with Carden here.)

Eleanor is quite the pill as well.  She genuinely wants to be a better person, but occasionally can’t shake that part of her that would rather listen to the little devil on her shoulder – making her one of the most relatable characters on the show.  Seriously, who doesn’t enjoy a quick trip down the low road every now and again?  (I know I do.  Care to join?)  One of my favorite scenes is when she’s sitting in Michael’s office and he reminds her of something bad she did when she was alive.  Her kneejerk reaction is too giggle fondly at the memory before quickly reeling herself in and straightening up.  It’s funny because when she’s giggling Michael is giggling with her, as if they were old buddies.  He’s a demon, originally bent on torturing her for eternity, yet their shared situation has them acting more like friends.

This group isn’t much different than any other well-rounded group of TV friends. Eleanor’s the awesome one, Chidi’s the goody goody, Jason’s the dumb one, Tahani’s the hot one, Michael’s the mean one and Janet is, well, the Janet.  I care about every single one of these fictional people, and I think that’s the mark of a great show.  I’m never bored because all these people are fun to watch, and every episode leaves me wanting more.

TGP has a lot going for it.  It’s funny, smart, unique and self-aware and, like, 95% family friendly.  It’s high concept comedy done right, and if you ask me it deserves extra acclaim for being able to give viewers super-likeable characters, hilarious one-liners, deadly funny puns, goofy bits, and a touch of existential philosophy without having to double down on any one religion or come off as even the slightest bit offensive.

The bottom line is this: The Good Place is dope, and if you don’t like it, go fork yourself.