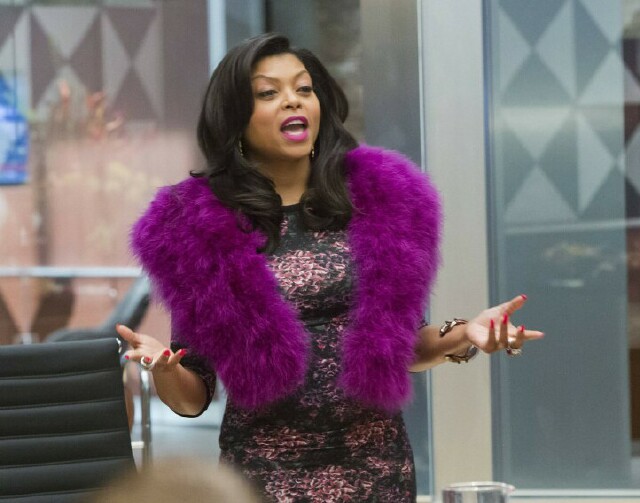 Fox’s “Empire” did more to change television when it arrived in early 2015 than any other series this year. It’s the first series with a predominantly black cast since “The Cosby Show” to become a television phenomenon and tip the entire industry on its side by proving that the American television audience doesn’t require the shows it wants to watch to be comprised of any specific group of people, or even a carefully constructed diverse mix. Rather, it’s the stories and the characters and the narrative environment that count.

Still, there was no denying the excitement generated by “Empire” among African Americans, largely underrepresented on most of television, especially in the context of a giant broadcast hit. In addition, “Empire” proved to be a refreshing change from the dozens of super-serious, archly intellectual dramas that now dominate so much of television, especially in the cable and streaming areas. “Empire” showed us that there is still an audience for serialized escapism, the likes of which enthralled tens of millions of people every week during the era of “Dallas,” “Dynasty,” “Falcon Crest” and “Knots Landing” and, later, “90210” and “Melrose Place.”

Indeed, one thing people tend to forget about “Dallas,” “Dynasty” and the other high-gloss primetime soap operas of the Eighties is that they focused on a certain segment of society – the super-rich – and took advantage of the joy to be had by the rest of us in watching them suffer. For better or worse they were very much a reflection of and a reaction to the economics of the Reagan Era, when the rich got richer and the middle and working classes took a beating. (Some things never change, do they?)

“Empire” is very similar in its reflection of certain aspects of life in the moment, as well as its presentation of people who have the kind of wealth that most of us can only dream about, but it is nicely balanced by the inclusion of people who have little or no money at all and also by the backstories of the wealthy characters on the canvas, most of whom started out poor. The rich and the powerful people in the music and entertainment business around whom “Empire” revolves never forget where they came from and the lives they left behind.

Most of the credit for this show goes to its creators and executive producers Lee Daniels and Danny Strong, along with executive producer Ilene Chaiken, each of whom clearly has a finger on the pulse of the moment and an understanding of the tone of these turbulent times. They also know how to craft one hell of an entertaining show – one propelled along by sizzling over-the-top confrontations and infectious hip-hop beats. 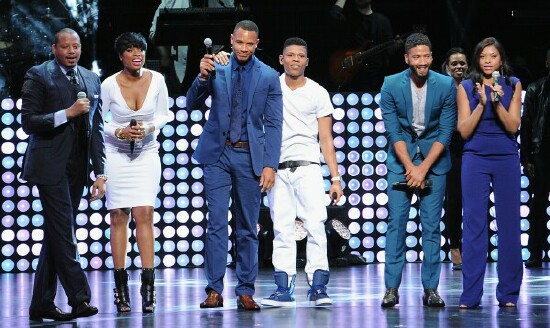 And then there is the cast, uniformly excellent across the board, from lead actors to supporting players to recurring and one-time guest stars. (Jennifer Hudson, second from left, is pictured above with the "Empire" cast at Fox's Upfront.) The stand out, of course, is Taraji P. Henson (pictured at top) as Cookie Lyon, fighting tooth and nail to enjoy her time at the top after languishing in prison for 17 years to protect her husband, manipulative music mogul Lucious Lyon, played with similar ferocity by Terrence Howard. Jussie Smollett, Bryshere Y. Gray and Trai Byers as their sons Jamal, Hakeem and Andre, respectively, are also scene-stealers. Smollett and Gray, both extraordinary musical talents, often own this show. Smollett (below) has even begun toown the advertising that supports it. 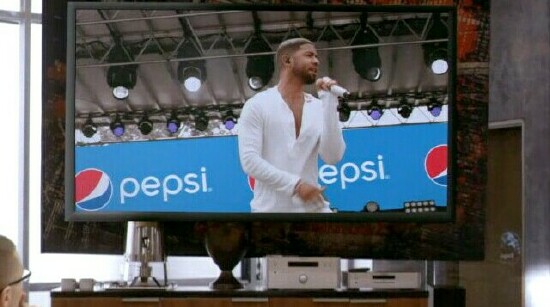 In terms of ratings and response, the first season of “Empire,” which ran from January through March, was historic in its impact. Season two, which kicked off this fall, hasn’t been as rewarding, perhaps because Daniels and Co. seem to be rushing through their stories or maybe trying to tell too many at once. But “Empire” is still one of the best shows on television, and one of the few that simply has to be watched in the moment, for the big fun to be had on Twitter during its telecasts and to be able to talk about each episode the morning after.