Viewers Outside the Home Really Do Add Up, Nielsen Says 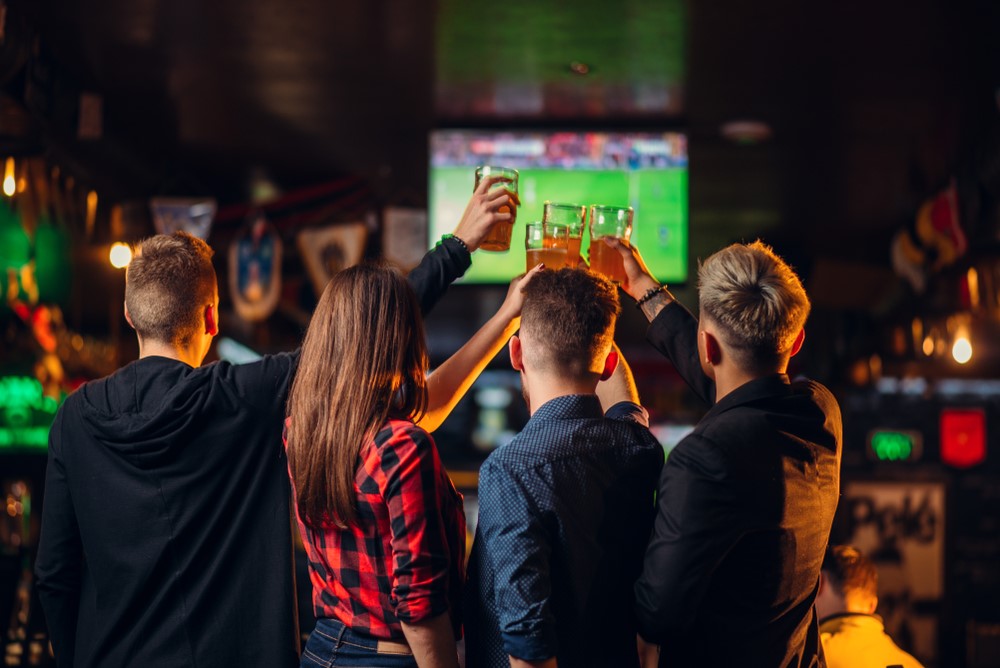 If there's one thing sports media execs have always known, it's that people like watching sports together -- and not necessarily in their living room.  But until rather recently, there just weren't independently collected numbers on how many people were watching a given event outside their homes.

Nielsen began collecting this out-of-home (OOH) data in 2016 and signing contracts with clients for this measurement shortly thereafter.  These ratings tacked on another 10 percent to the NFL's regular season total viewership this fall, and 12 percent in that coveted 18-49 demographic.  As a supplement to these ratings, Nielsen also conducted two surveys this fall to get some more info on these OOH viewers -- those who are watching at a bar or restaurant, or while logging some miles on the treadmill.

The results are interesting: A whopping 27 percent of adults aged 18+ said they'd only watched a sporting event that fall in a restaurant or bar, and 31 percent of adults 18-24 said they watched while at the gym.  This 18-24 cohort largely falls into Generation Z, the only generation scarier than Millennials, and one generally thought to be impervious to linear TV. 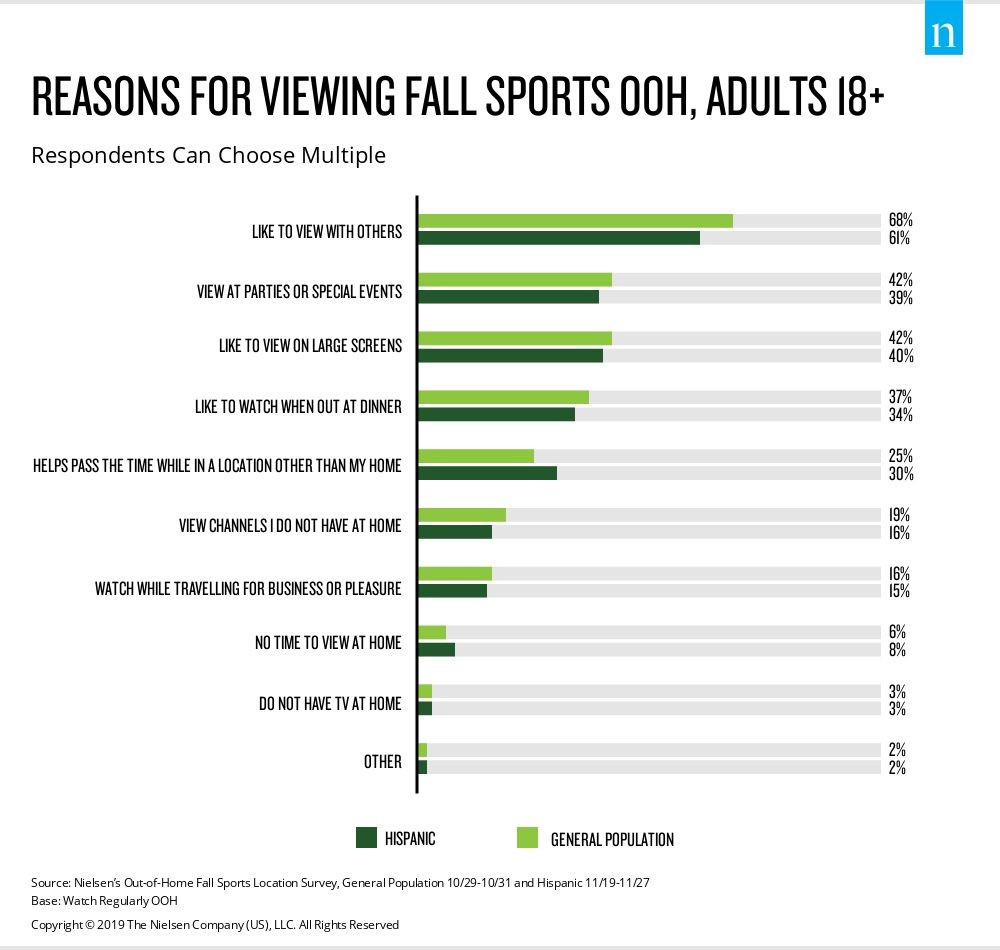 The co-viewing trends are also something to perk up marketers' ears.  Nielsen found that 68 percent of people watched out of the home simply because they like watching with other people.  Men were slightly more likely than women to involve larger numbers of people in their co-viewing, with 15 percent saying they were in a group of 10 or more (11 percent for women).  Hispanic audiences were more likely than the general pool of respondents to have watched a game or match with more than four people, 58 percent to 54 percent.  That's a lot of extra eyeballs.

So what's all this mean?  Aside from a larger rating to tout, is this data that advertisers are willing to transact on?  Bars and restaurants may be crowded and noisy, after all, and co-viewing can bring plenty of distractions from what's happening on screen.

Well, yes.  Advertisers have been estimating this kind of viewing for decades and designing creative with it in mind.  And though the distractions outside the home may be plentiful, 75 percent of Nielsen's survey respondents said they were at least "somewhat-to-very likely" to notice what brand or product was being advertised on-screen. 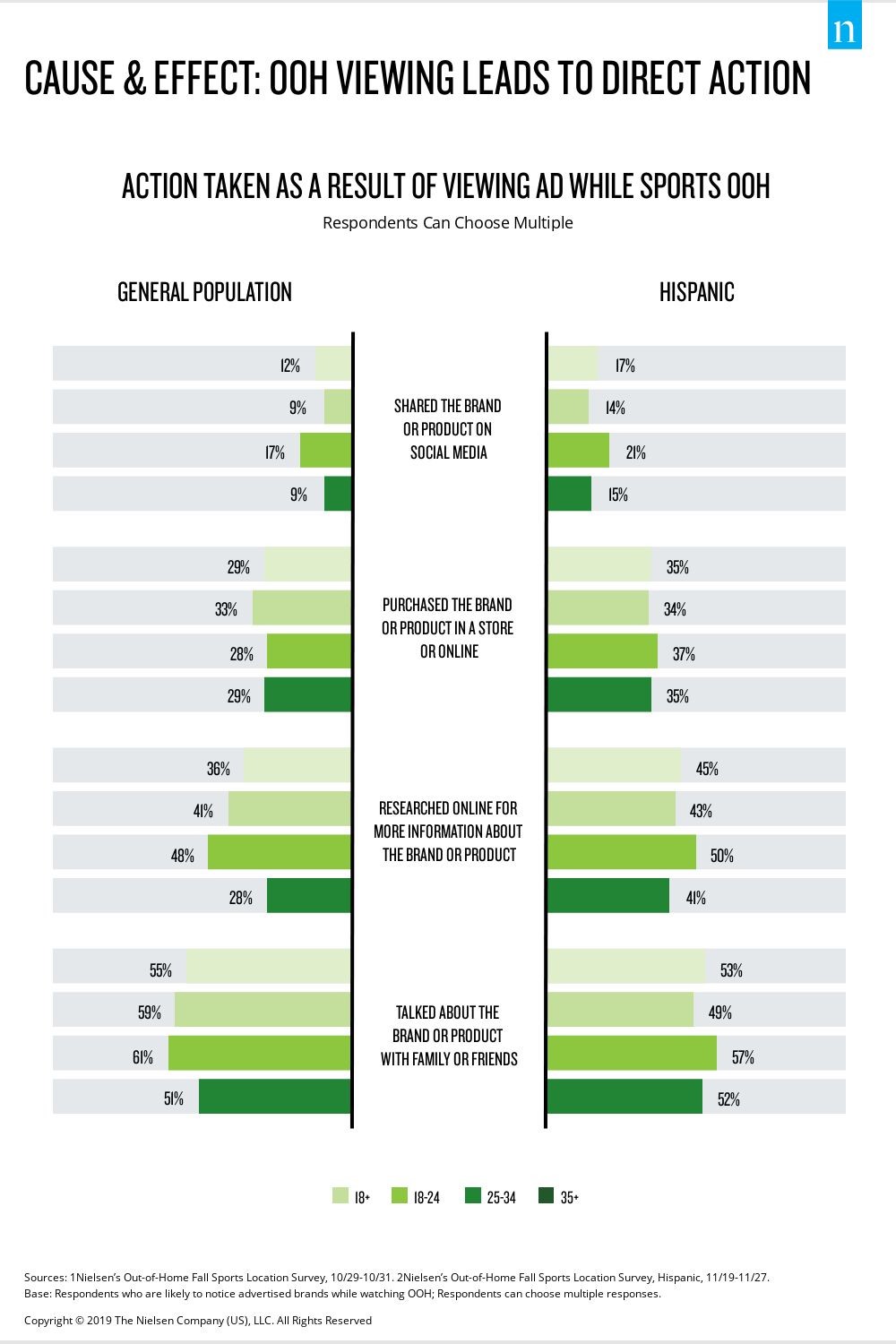 Even better, that hard-to-reach Gen Z cohort is paying attention:  One-third of those 18-24 surveyed recognized a product or purchased/talked about a product because they'd seen an ad for it while watching fall sports outside the home.  Millennials -- no longer spring chickens, exactly -- were the ones who were most likely to share thoughts on social media about a brand or product they'd seen advertised.  About 17 percent of those 25-34 in the survey did just that, in fact, and 60 percent of them at least talked about it in a more traditional fashion.

The eyeballs are there.  What comes next is up to advertisers.