Voice Gets Loud at CES 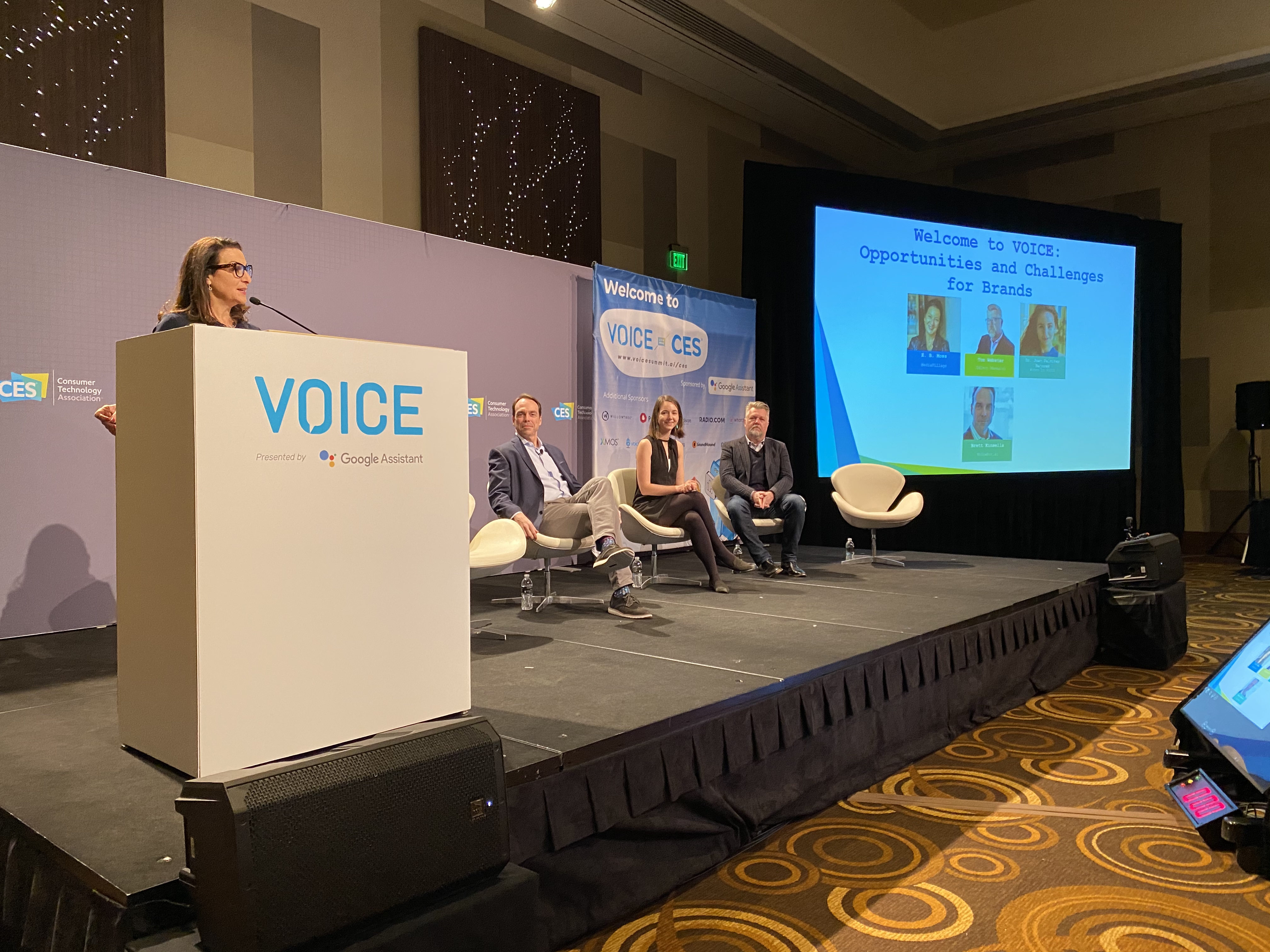 As guests filed into the neatly arranged Juniper conference room at the Aria hotel in Las Vegas, a particularly catchy tune drifted down from speakers across the room. It would later be revealed as sonic branding for CES's Voice Summit, a fitting choice for a lineup of panels focused on how brands are pushing the limits on audio and voice, as well as what the future has in store for this hands-free, ever-evolving medium.

With voice apps being developed by seemingly every brand and voice assistants proliferating from Amazon, Google, Samsung, and others, right now, voice is as hotly competitive as the streaming wars. So, in kicking off the track, Scott Huffman, vice president of engineering for the Google Assistant voice device, emphasized Google's focus on human-like interactions, rather than solely on engagement. "It needs to be personal and interactive and contextual," he explained, "[and] a natural way to ask for what you want and to get things done." This natural flow works to help drive users' daily routines, from calling relatives to opening music streaming apps.

This flow is especially important as our digitally driven world becomes more and more voice-activated, expanding beyond homes and smartphones and making its presence known in cars and even on bicycles. As the power of voice grows, we rely on industry pros such as Google's Huffman to lead the conversation. His presentation was followed by the panel discussion "Welcome to VOICE: Opportunities and Challenges for Brands," featuring several voice experts and led by MediaVillage's own head of content strategy, E.B. Moss, who focused the session on "how we use voice past engagement."

Moving beyond just engagement to having natural interactions with voice-enabled technology is vital because, as Bret Kinsella, founder and CEO of Voicebot.ai, pointed out: "Convenience wins."

As smart speaker interactions become more refined, the ease with which users will be able to conduct on-the-go transactions and discover new content will increase exponentially. Kinsella believes users are driven by convenience and claimed that it's unwise for brands to put on blinders to that reality. "No one is coming to save you from discoverability," he said.

Regardless of any challenges that brands might face, the appeal of voice is clearly pervasive among consumers. Panelist and vice president of strategy and marketing at Edison, Tom Webster, shined a spotlight on NPR and Edison's winter 2019 Smart Audio Report, revealing that there has been a 135 percent increase in smart speaker ownership over the past few years — from an average of 1.7 devices per household in December 2017 to 2.6 devices in December 2019. That means as many as one in four U.S. adults own a smart speaker, with 24 percent using voice commands on a daily basis.

Webster is optimistic about the rise of voice technology but acknowledges that there are some concerns that need to be addressed. Smart speaker privacy and security have become points of anxiety for owners and non-owners alike, he explained. Security concerns might make potential users uncertain about buying a device, while owners might be hesitant to experiment with different commands and uses. "Nothing is more terrifying, from a privacy standpoint, than the smartphone in our pockets," he said.

Despite these concerns, Kinsella pointed out that many of the same users who express anxiety over smart speaker privacy and security are still purchasing voice-enabled devices. He elaborated that while it's an issue brands should pay heed to, "it's not a big gulf between what [consumers] are saying and what they're doing."

Other potential issues — the way users speak, the way brands name their products, and the way voice devices process speech — are interconnected. Moss pointed out that brands should be concerned when it comes to clever wordplay in brand names, such as her own Insider InSites podcast.

Although changing a few letters might not make much of a visual difference, voice devices may affect how brands name their products in the near future, posited Joan Palmiter Bajorek, Ph.D., head of conversational research & strategy, at Versa and founder/director of Women in Voice. She's a firm believer that voice tech needs to evolve to address this concern. "We shouldn't have to beg for certain words to be added to the smart speaker lexicon," she asserted. Likewise, creating unending tutorials for voice devices isn't a viable solution, as users crave a seamless experience, and such a fix would only create more friction. "We're a ways off in meeting our users' needs, in terms of use cases," Palmiter Bajorek explained.

Webster looked even further into the future, claiming that automotive voice tech is due to hit its stride in 2025: "I think people are going to be talking to their cars a lot more."

Kinsella, likewise, spoke as to what we can expect to see in the far future of voice, claiming that we'll see even more brands adopting voice technology. "[In] 2025, I'm expecting the top 25 percent of brands will have their own voice system." He expects that brands will be able to expand what they offer consumers through voice.

Palmiter Bajorek has a small but mighty vision for the near future: "I want to stop us writing emails." Such an innovation could revolutionize the way we communicate with one another, she said, especially for elderly users who might not be able to type well due to afflictions such as arthritis.

Despite the friction and fears some users might experience, these industry pros are positive that any difficulties can be overcome as voice tech continues to develop over the next few years. All that's left to do is wait with bated breath to see if their well-informed predictions come true.

To read more about audio and voice at CES, check out our additional coverage here.