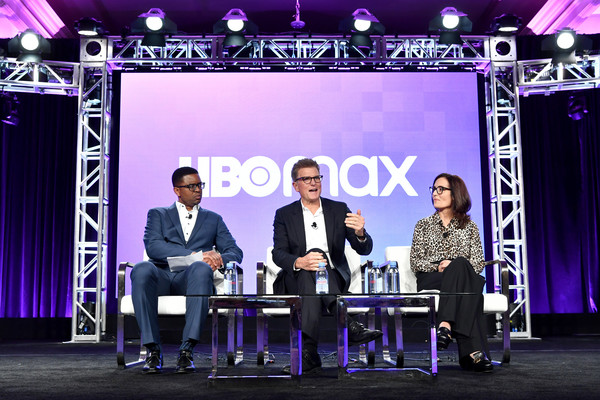 Pasadena, CA -- The relatively young WarnerMedia has already established its own day at the twice-yearly Television Critics Association tours, featuring panels for HBO, TBS, TNT, truTV and other entities from its vast portfolio of networks and services.  HBO Max will undoubtedly play a major role in their day at the upcoming summer tour, but it was the hot topic last week during a panel with Kevin Reilly (above center), chief content officer, HBO Max and president, TNT, TBS and truTV; Sarah Aubrey (above right), head of original content, HBO Max, and Michael Quigley (above left), executive vice president of content acquisitions for TNT, TBS and truTV.  They had come to set the stage for the May 2020 HBO Max launch to come, and while they certainly did that, they frequently found themselves explaining how the whole HBO Max/HBO/HBO Go/HBO Now thing is going to play out.  They were also asked about the fates of poor Cinemax and the seemingly overlooked DC Universe.  (There are a lot of nerds in TCA.  I say that with affection.)

Significantly, there is still much confusion in the television press as to what exactly is going to happen come May.  Throughout the panel, Reilly repeatedly did his best to clarify a number of concerns, but in the days following the panel many TCA members were still trying to figure out how it will work and whether or not consumers are going to sign up, especially with so many other streaming services having beaten HBO Max to the starting gate, not to mention its relatively high monthly fee.

“What is the relationship between DC Universe and HBO Max going to look like, especially when it comes to original programming like Doom Patrol?” one anxious reporter asked.  “I know that Doom Patrol is moving to HBO Max, but what does it mean for the other DC originals?”

Reilly was reassuring.  “That’s evolving right now because that’s a deep fan experience that we intend to keep going, at least for the immediate future,” he said, referencing such original DC series as Titans and the animated Harley Quinn.  “You could expect that the DC [series] will be in the HBO Max experience, but the deeper fan experience of DCU I think can work in tandem [with it], and we’re working out what those mechanics are.  I’m not opposed to giving those fans a preview of our shows and letting them evangelize, whether that’s one episode or even maybe a day or so to kind of preview the whole series, because they’re really the ones that will get out and talk about it.”

They have yet to figure how that will work, he added.  “The managing of DC is a very important piece of the equation.  I hope we handle that delicately and it works out smoothly.”

“So if I wanted to have the HBO Max content but also wanted to watch Watchmen or Westworld, do I also have to have HBO Now?” asked another.  “Will it be included in HBO Max?  How does it all work?”

“When you see the product you’ll see immediately that it is inclusive,” Reilly replied.  “First, we have ten million installed HBO customers on AT&T services alone.  On day one we will [have] a frictionless automatic sign-on [to HBO Max] for those customers.  So, the HBO experience is embedded.  If you want to see a discreet HBO experience, there is a very visible button that [brings] HBO up.  If you would like to have a discreet viewing experience of HBO alone, those other products, HBO Now and HBO Go will continue to exist so that you can view HBO discreetly on those.  But because we’re putting the full power of AT&T behind the launch and sell of HBO Max, our expectation is first to convert the 30-something million customers of HBO onto HBO Max because for them the proposition is this: more than twice the content for the exact same price.”

“So, if I don’t have HBO through cable, this would be the one service where I can get all of the HBO content?” the critic continued.

“That’s right,” Reilly said.  “Now, you’d have the choice of buying it through the MVPDs we cooperate with.  We will also be selling it direct-to-consumer as we do with HBO Now.  The HBO experience becomes embedded within the HBO Max bundle if you will.  There’s one product for you to view all of the content including HBO.

“Here’s what the data shows,” he continued.  “We know HBO is a beloved brand.  But [HBO viewers] also watch other things or they have other members of their household watch other things.  We’re providing a service where we can invite you to stay in the same experience for longer because there’s more for you and more for other parts of your household including the HBO shows you love.”

What about the library of classic Warner Bros. Cartoons, many of which are available on Boomerang? What’s to become of them, and it, another critic asked.

Many of them will be brought over to HBO Max, Quigley said.  But Boomerang will remain a standalone service.  “There is a broader variety in content of those classic cartoons that would be available within the Boomerang service that aren’t necessarily a part of the HBO Max experience,” he explained.  “For those true super fans who want that deep experience of classic cartoons, Boomerang will continue to exist for them.”

“I just want to be absolutely clear,” a jittery critic interjected.  “If you subscribe to HBO Max, you will not have to pay extra for HBO?”

“I’m just a little confused because you talk about producing content for HBO Max and then there’s content for HBO,” said another reporter.  “To be clear, any content that’s produced original for HBO appears on HBO Max, as well?”

“The larger question is about pricing strategy,” one critic asserted.  “I totally understand that the big get is the 30 million linear subscribers and moving them over to the platform.  But $15 [per month] in the streaming world is a substantial ask.”

“What do you say to the person who’s cut the cord on cable and says, ‘I’m not sure that that’s worth paying two dollars more than Netflix, when I get such a big buffet already from Netflix?’”

“Let me break it down,” Reilly replied.  “I think people do not shop for their entertainment experiences with price being the primary [concern].  People don’t say, ‘I’d love to go to this concert.  I don’t really want to go to that one as much, but it’s cheaper, so I guess I’ll go to that one.’  Generally speaking, that’s not how people make their entertainment choices.  [Side note:  At that point one could overhear many reporters in the room mumble, “Yes it is.”]

“Our data shows that there are millions of available customers beyond those have HBO,” he continued.  “Let’s say we convert all the HBO customers over to HBO Max.  We see that there is a deep pool of millions of additional customers — I won’t put a hard number on it, but it’s substantial — that say, ‘If I had a broader array [of programming], I would like that service.’  Price is not a factor.  They feel like that’s worth it.

“As you get to the deeper end of the penetration, you begin to get to people [for whom] price sensitivity does become a real factor.  Either they truly can’t afford it, or they’d like it but they can’t spend that full amount.  That is why we’ve already announced that we will have an AVOD product, within about a year after launching this service, to offer that flexibility to those consumers.”

“What role do Cinemax and Cinemax Originals play in this ecosystem?” Reilly was asked.  “Is there even a reason for Cinemax to exist anymore?”

“I think you can expect there won’t be any more Cinemax Originals being produced going forward,” Reilly said.

“I’d say we’re not planning to bring the Cinemax content into the service overall,” Quigley added.  “I think as it relates to the Cinemax value proposition for its audience and for its customers, it still serves an important value for its customers in terms of its movie offerings, as well as some of the originals that you talked about before.”

Reilly noted that he had recently been asked if he refers to the new competitive arena as the streaming wars.  “I don’t like that term,” he asserted.  “You know, all those years I spent in broadcast trying to beat the other guy, and to be the number one network …  I really don’t think of it in those terms at all.  You can see now as these services premiere and roll out that they really are quite different.”