What We Know About Frequency in TV and Digital Advertising: Pt. 2 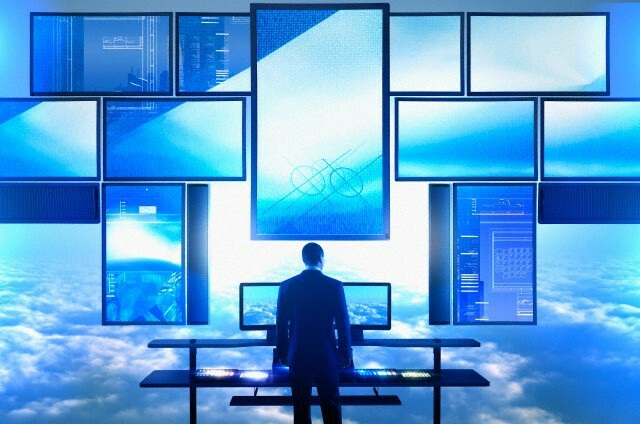 InPart 1 of this article we focused on how frequency has traditionally operated within the TV framework. In Part 2 we discuss what we’ve learned about digital’s ability to deliver frequency and how this medium can be used in conjunction with TV to deliver more efficient media plans.

Measurement of frequency on digital has traditionally been very messy, to say the least. More specifically, the medium has generally been plagued by an inability to accurately quantify ad frequency, which has contributed to a problematic measurement environment. In the earlier days of online audience measurement, cookie proliferation and deletion -- with a monthly average of 2-3 distinct cookies per campaign per unique individual -- led to the previously mentioned overstatement of reach and corresponding understatement of frequency for ad campaigns.

When comScore first began measuring online ad campaigns, we observed that it was not uncommon to see a small percentage of users receiving an extraordinarily high number of impressions. Whereas on TV an advertiser typically wants to reach a consumer with a frequency of about 3 to 4 per week, it appeared that online was delivering frequency levels orders of magnitude higher. And even though advertisers generally aim for a higher frequency with digital than with TV there were still problems. For example, in the campaign below the goal was a frequency of between 3-8 impressions.  However, while the average number of impressions delivered was 5.5, the distribution was not what was intended. On the low end a full 64% of individuals exposed to the campaign had a sub-optimal frequency of 2 or less. And at the high end, 14% of individuals had a frequency of 9 or greater while accounting for 66% of all impressions delivered in the campaign. In fact, those individuals in the 10+ exposure segment were delivered an average of 27 impressions! 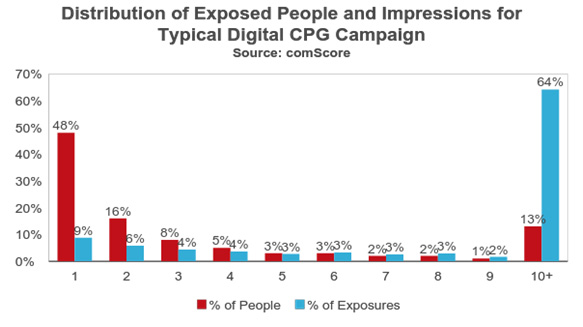 And if these issues weren’t problematic enough, it turns out they were still only part of the story. As we discovered over the years, the number of invalid ad impressions stemming from either non-viewable ad inventory or those delivered to non-human traffic led to an overstatement of actual frequency -- often by a magnitude of more than 2x.

On the positive side, the advent of in-flight campaign optimization services (such as comScore vCE) has dramatically improved the situation. By monitoring and reporting actualfrequency levels while the campaign is being delivered -- which allows the agency to make adjustments as necessary at the publisher level -- the use of these services ensures that the delivered campaign more closely resembles what was planned in terms of reach and frequency against target.

In addition, with the ability to exclude impressions not delivered to a human but rather to a “bot” (i.e. non-human traffic), we can now accurately measure true frequency on digital. The messiness is getting cleaned up, and it not only means that digital campaigns can be more accurately evaluated, but that the consistency with TV’s "opportunity to see" standards means that there is an improving ability to measure cross-platform reach and frequency.

Measuring Frequency in a Multi-Platform Digital and Cross-Platform Environment

With the rapid adoption of smartphones and tablets -- and with no decline in the usage of desktop computers -- an additional challenge has emerged in the case of digital media plans: Frequency needs to be measured at the user level and include a de-duplication of users across digital devices. This is particularly important in light of the fact that comScore research has shown that time spent online has more than doubled over the past four years. This creates many more opportunities to reach consumers but also puts more pressure on measuring true delivered frequency at the unduplicated user level.

Multi-platform becomes cross-platform when TV is included in the mix. As the advertising industry transitions to a unified cross-platform media planning environment, frequency optimization promises to be a huge source of efficiency. Breaking down the walls between TV and digital means better allocations and improved outcomes for advertisers. But it also requires new databases with the scale to measure audiences across a dizzying array of combinations of platforms, devices and delivery options. This was succinctly summarized earlier this year by Irwin Gotlieb, Chairman of WPP’s GroupM, who noted that to harmonize TV and digital media planning and buying in today’s complicated world requires new data on viewing behavior that measures unduplicated audiences at a granular level across all combinations of platforms.

A number of top advertisers are now using overlapped privacy-protected databases in which large numbers of households are measured for TV and digital ad exposure as well as purchase. This produces not only unduplicated reach of the cross-media campaign for over a million households with all hard data, but also single-source purchase/ROI data on a representative quarter of these. comScore and TiVo Research have done such studies and many other companies have also teamed up with one or both of us to also do such studies.

Best Practices for Frequency Optimization: Putting it All Together

Summing up what we have learned so far:

No discussion of frequency would be complete without mentioning the one question that never gets enough attention: How do I know if I am not spending enough? For campaigns that have been well optimized using best practices from creative through planning and execution, and during flight, ROIs of many brands today are good enough to be asking that question. The answer to it is to do heavy-up testing. That used to be normal, but in the current maelstrom of technochange best practices have been victims of the fascination with shiny objects. It is possible that for some of your brands you are leaving money on the table, and this is easily fixable. The incremental spending should aim to increase frequency among most-convertible customers just before shopping trips, but not more than two per 48 hours.