When the United States Registers Last in Trust in the Press 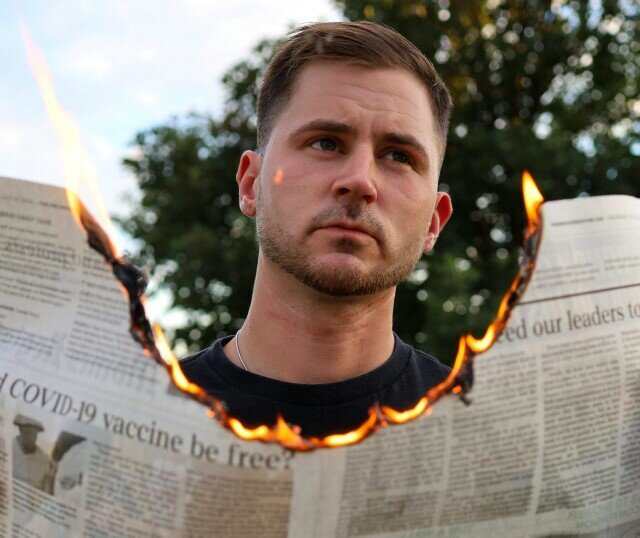 According to a report issued this June by the Reuters Institute for the Study of Journalism at Oxford University, of the 46 countries surveyed, the United States ranked last when it came to the country "that trusts most news most of the time." In Denmark, for example, 59% of Danes "trust most news most of the time." In the United States, however, that figure registers at only 29%, a far cry from Portugal's 61%; Nigeria's 54%; or even 45% in Singapore. For anyone who regularly consumes news in the United States, this finding is likely not altogether surprising.

As one has, unfortunately, come to expect by now, reactions to these findings included suggestions for doubling down on the very practices that brought about this state of affairs in the first place. Unlike other industries, which shift their strategies according to changing consumer habits or in response to the feedback they receive, the news media has consistently demonstrated its inability (or, more likely, its unwillingness) to change course. Indeed, a given outlet may modify its method of delivery or invest in a new streaming service, but it rarely reconsiders the types of content choices that caused the national press to so overwhelmingly hemorrhage trust and confidence in recent years.

If one recalls, in the aftermath of the 2016 election results, an election that journalists and political pundits nearly universally expected to result in a victory for former Secretary of State Hillary Clinton (along with a Democratic-controlled Senate), news outlets issued their mea culpas. In The New York Times on November 9, 2016, the day after the election, Jim Rutenberg wrote, "And that's why the problem that surfaced on Tuesday night was much bigger than polling. It was clear that something was fundamentally broken in journalism, which has been unable to keep up with the anti-establishment mood that is turning the world upside down." He also predicted that "... you're going to hear a lot from news executives about how they need to send their reporters out into the heart of the country, to better understand its citizenry." And indeed they did; editor after editor pledged to have their journalists spend more time away from the Amtrak corridor so as to better understand the country they were supposed to be covering.

Of course they didn't actually do that though. By the time of the 2020 election, the press was again collectively astonished by then-President Donald Trump's ability to capture north of 74 million votes and -- even more so -- by the Republicans' ability to gain 14 seats in the House of Representatives when many forecasters predicted Republicans possibly losing upwards of 20 seats. They were also startled by President Trump's significant gains with non-white voters. This is also paired with the fact that many journalists' preferred policy proposals -- some of which were on the ballot, either explicitly or implicitly, this past November -- are deeply unpopular, even among the demographics many in the press claim to be speaking on behalf of.

Further, the Reuters Institute report posed a telling question on "Public attitudes to impartiality." According to that survey's findings, 74% of respondents agreed with the prompt that "News outlets should reflect a range of different views and leave it up to people to decide," as compared to the just 15% who answered conversely that "News outlets should argue for the views that they think are the best." Yet, when it comes to content choices, it seems that most media outlets have things very backwards, as they endlessly advocate for their pet proposals and demonize the ideas (and impugn the character) of their opponents. And this is not even to mention -- as I have discussed previously in this column -- that all of this scrutiny and policy advocacy tends to disappear should their preferred candidate get into office, even if said candidate pursues dramatically different policies once on the side of the campaign.

To be clear, however, this all goes much deeper than simple partisan politics. Although this column has discussed at length many of the maladies ailing the American press, from its relative lack of coverage of certain very pressing issues to its disinterest in issuing corrections when reports later turn out to be untrue, perhaps the most concerning feature is its inability to deviate from consensus, pre-approved narratives. 2021's iteration of journalism sorely lacks this much-needed air of skepticism, particularly of its preferred political actors' talking points. This has been very much on display in coverage of the Coronavirus pandemic, where many in the news media refused -- for over a year -- to consider alternatives to the official story, offered by the World Health Organization and China, about the origin of the virus. It was only when certain favored figures began to question if the virus, indeed, had a natural origin that the national press began retreating from throwing around terms like "debunked conspiracy theory" and finally assumed the air of humility that it ought to have had all along while we wait for more definitive answers.

There is a certain intellectual cowardice that mars today's news media, a lack of courage to entertain any explanation that might deviate even for a moment from the consensus opinion or the preferred view of those hailed as "experts." But all of this can evaporate quite quickly when these experts turn out, upon closer examination, to have been incorrect. Wilfred McClay perhaps put it best: "We love to mock conventional wisdom, so long as it is yesterday's wisdom."

It is unclear when interpreting the Reuters Institute report if the American press is uniquely flawed in the world or if American media consumers are simply more attuned to sniffing out journalistic shortcomings. However, the political scientist John Gerring is correct to note that, "Any argument in which the unit of analysis is a country rests -- at least implicitly -- on cross-national comparisons." The study does, as I alluded to, indicate a very concrete area for improvement: Show a greater range of perspectives on a given issue. I certainly would have a few more to add, but foremost among them is imploring journalists, editors and producers alike to be simultaneously more humble and more courageous when considering possibilities that challenge the given orthodoxy of a given day.