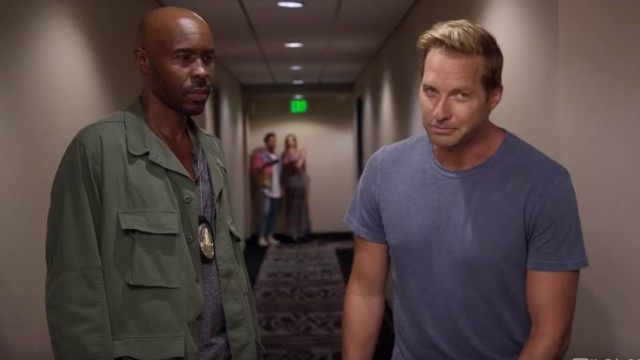 YouTube’s Ryan Hansen Solves Crimes on Television is about, you guessed it, real-life actor Ryan Hansen playing a fictional version of himself that solves “real” crimes with the LAPD.  This multi-format, cameo-laden, hyper-meta buddy-cop comedy has been one of YouTube Red, err, YouTube Premium’s best kept secrets for two seasons now, and while its second season (which premiered late January) revealed itself to most likely be the final season of the show, I’d like to talk about why that just shouldn’t be.

What made Ryan Hansen special is -- drumroll please -- Ryan Hansen.  The “Ry Guy” has been doing his thing on shows like Veronica Mars, Party Downand (one of my personal faves) Resident Advisorsfor over a decade now.  Sure, some of you maybe be going, “Who?”  But the joke’s on you, because that’s Ryan Hansen’s main joke.  So, I guess technically the joke’s on him.  Either way, series creator and executive producer Rawson Marshall Thurber took that joke and ran with it back in 2017, and the result has been something truly unique.

At any given time during an episode of Ryan can (and will) go from “reality show” to procedural to multi-cam sitcom (studio audience and all), and while for most shows that’d be a death sentence, this one turned it into their thing.  The idea is that the mayor of Los Angeles greenlit something called Celebrity Vice Squad, a reality show where Ryan Hansen solves crimes on “television” with a “real-life” LAPD officer at his side.  However, the reality of the show not really being on TV per se and being a streaming show that keeps most of its episodes behind a paywall on YouTube (a website almost exclusively known for free, user-generated content) is also something that everyone on the show is aware of.  What results is this universe where not only are these celebrity/cop pairings normal happenstance, but things like the absence of due process or the fact that there’s a camera crew literally always present doesn’t seem to bother anyone.

Regardless, the whole Odd Couple-cop show thing works for them, in large part due to what both fictional and real-life Ryan Hansen bring to the table: fierce comedic chops and an intimate knowledge of the L.A. scene.  His original partner, Jessica Mathers (Samira Wiley), did an amazing job of being everything Ryan wasn’t in the first season, as she was meant to be the no-nonsense cop that grounded us to reality.  Their dynamic worked and, as time passed and they went from wacky case to wacky case, their on-screen relationship bloomed into something likable enough to make me genuinely upset when it was announced that Wiley had been replaced for season two.

That replacement would end up being none other than Vince Vincente (Wood Harris, pictured at top left opposite Hansen), and even though the Hansen-Mathers fan in me hates to say it, it felt like an improvement.  Don’t get me wrong, I wouldn’t change a thing about season one, but the show was going through its growing pains, setting the viewers expectations for what kind of show it intended to be, and in doing so produced a couple of cringe-worthy moments.  I know all of it was fictional, but Wiley’s character didn’t feel authentic enough as an officer for me at times.  Granted, Harris’ first appearance consists of him openly assaulting a witness in broad daylight at the scene of a murder, but that eventually played into what was a much tighter arc in the second season. Overall, Harris had an overall believability that really worked for his role as Hansen’s straight man, but Wiley and Hansen’s dynamic set the emotional baseline for the show.

The soul of Ryan Hansen Solves Crimes on Television lies in the titular character’s seemingly indestructible optimism and his wealth of knowledge about the most vapid, ridiculous aspects of L.A. actor culture and trends.  At the end of the day, Ryan’s a good guy who’s done great work, and while for the most part he’s a loveable goof, he does genuinely come through in the clutch when dealing with these Hollywood murders, adding credence to how useful he is.  That doesn’t stop his partner from calling him an idiot, or his network from trying to replace him, but that’s the joke.  He’s just happy to be here, guys.

Season one had cameos from celebs like Joe McHale, Jon Cryer, Donald Faison and Kristen Bell (among many others), all of whom played bizarro versions of themselves (except for Joel McHale; I think that might just be him).  Cryer played a murderous psychopath, Faison a super self-obsessed party animal, and Bell an allegedly homicidal off-brand Disney character rental madame.  Yeah.  This gave us great moments, my favorite being Kristen Bell saying, “Elsa can suck my dick” to a little girl while being arrested in an Elsa costume.  (Bell played Anna, Elsa’s sister in the Disney movie Frozen.)

Season two takes everything I loved about the first and really makes it shine.  It upped the ante with even more cameos.  Faison and McHale return as callbacks to the first season, leading to a hilarious back and forth between Faison and Harris (they starred in 2000’s Remember the Titans together).  Cryer returns as well, and of course, there’s that Ken Marino appearance for all you Party Down fans out there.

The show needs to be seen to be fully appreciated.  It has a ton of running jokes, meta-commentary and guest appearances, and it’s kind of impossible to sh*t on, because it spends most of its time sh*tting on itself.  By embracing all of its most ridiculous aspects, it has created something that truly doesn’t exist, and after that almost tear-worthy season/series finale, may never exist again.  In an interview with IndieWire, Thurber said that YouTube had been “completely supportive – hands off, but in a good way,” and I believe it was this creative freedom that allowed for something so out there to exist in the first place.  It remains to be seen if YouTube will bring the series back for what I feel is a well-deserved third season, but according to Thurber in that same interview, “Nobody has quite asked us to the dance yet.”

So yeah, it is very possible that we won’t get another season of Ryan Hansen.  If that’s the case I hope that its mere existence has paved the way for more shows like it, or at least for other networks to maybe lend their showrunners the same amount of creative freedom that streaming services like YouTube Premium have been prepared to offer.  Either way, I’m just glad this whole thing shed some overdue light on the “Ry Guy.”  Lord knows he’s earned it.