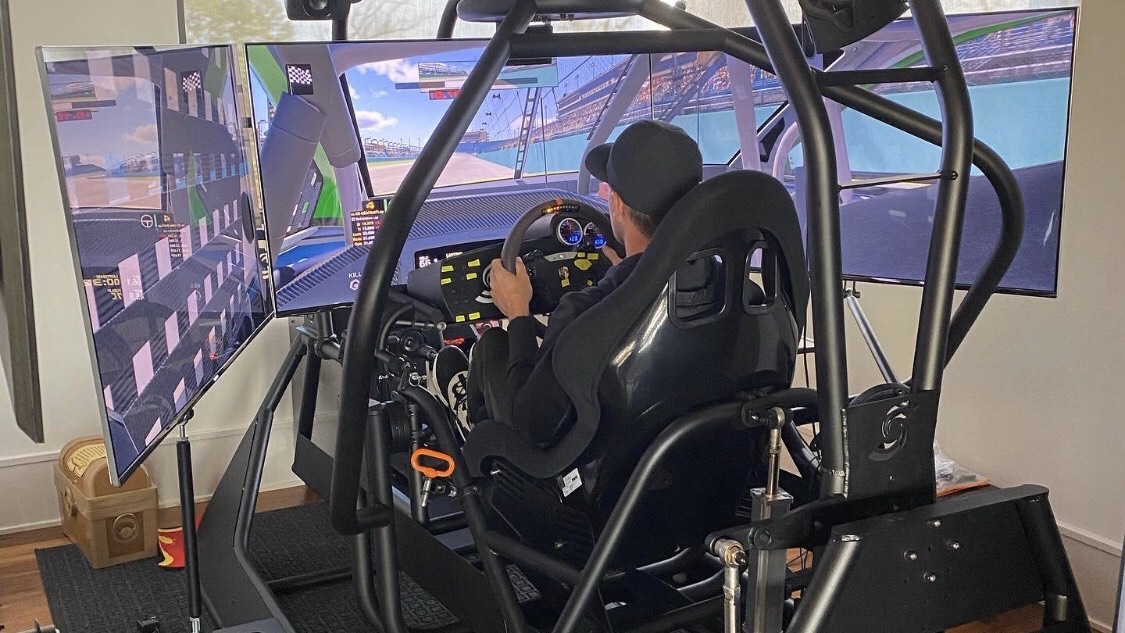 Racers typically use simulators, which have a steering wheel and pedals, at home and in the off-season to keep their skills sharp. Now, with most Americans — including NASCAR teams — at home, these simulators have a new life in creating an esports league.

Along with the other pro sports leagues, NASCAR paused its season in mid-March, as the coronavirus pandemic took hold. It took just two weeks to pull together the first virtual race. The league’s TV partners, Fox and FS1, are televising races and the usual broadcast team is providing analysis. For digital viewers, the action is streaming on the Fox Sports app.

To the uninitiated, esports might sound like a passive experience and perhaps even a little dull. In reality, before COVID-19, esports was already a fast-growing area on TV and online. Along with playing themselves, gamers like to watch experts and celebrities take the controls and compete in tournaments. Now, during what are arguably the biggest sports months of the year, there are no live sports on TV and esports is on a much bigger stage.

“It is more than watching other people play video games,” says Jessica Forrest, group vice president at NielsenSports. “With eNASCAR, it’s the same drivers, the same stars the fans are used to seeing, the same broadcast team, on the same tracks they compete at on the weekends.”

The first eNASCAR race, on March 22, included Jimmie Johnson, Denny Hamlin, and the recently retired Dale Earnhardt Jr. racing 100 laps at a virtual version of Homestead Miami Speedway — with Hamlin winning the race. The telecast attracted 903,000 viewers P2+ on FS1, including 255,000 viewers who had never watched a NASCAR race this season, Nielsen Sports reported. Fans tuned in for an average 59.42 minutes, which was more than half of the 112-minute event. The audience skewed more female and younger than typical NASCAR telecasts.

The momentum is building. On March 29, the action moved to a virtual Texas Motor Speedway, where Tommy Hill grabbed the checkered flag. The telecast attracted 1.3 million viewers P2+ on Fox and FS1 — an esports record and the second-highest rated sports broadcast of the week behind WWE Smackdown on Fox, Nielsen Sports reported. The next digital competition is slated for April 5 at a virtual Bristol Motor Speedway.

Without live sports, TV networks have been scrambling for programming, while sports leagues look to keep fans engaged. Esports offers a cure. NASCAR was the first to launch virtual action; others quickly following suit. Formula One is offering the F1 Esports Virtual Grand Prix series, featuring current drivers. And, although football is technically off-season, on March 29, the NFL hosted a Madden esports tournament that aired on Fox and FS1 and streamed on the Fox Sports app.

Not to be left out, the NBA just revealed plans for its own esports tournament. Sixteen pro stars, including Kevin Durant and Demarcus Cousins, will face off in an eight-day, NBA 2K20 tournament, which will air on ESPN and ESPN2. The winner receives $100,000 to donate to a coronavirus charity of their choosing.

While these events are not a direct replacement for March Madness or the Stanley Cup Finals, they’re offering sports fans an entertaining option. “In times like this, people look to sports for an escape and for a much-needed distraction,” Forrest says. “Esports is providing the competition and level of unpredictability that sports can offer.”

Of course, fans aren’t the only ones missing live sports. Advertisers are also scrambling to find new ways to reach consumers. Typically, the spring features a bounty of sports, including the NCAA men’s and women’s basketball tournaments, NBA and NHL playoffs, and the start of Major League Soccer, Major League Baseball, and NASCAR seasons, offering brands an abundance of advertising choices. While esports isn’t an equal replacement, it is, at least, an option.

“The sports landscape is not cluttered right now,” Forrest says. “This could be an impactful way for brands to connect with audiences, particularly younger audiences than their traditional sports competitions typically reach.”

Forrest expects that pro sports leagues and networks will add additional esports events in the coming weeks. “If there was ever a time for experimentation, this is it,” she says. “Everything is on the table.”

Don't stop now! Stay in the know on audience data with more from Nielsen Data InSites.