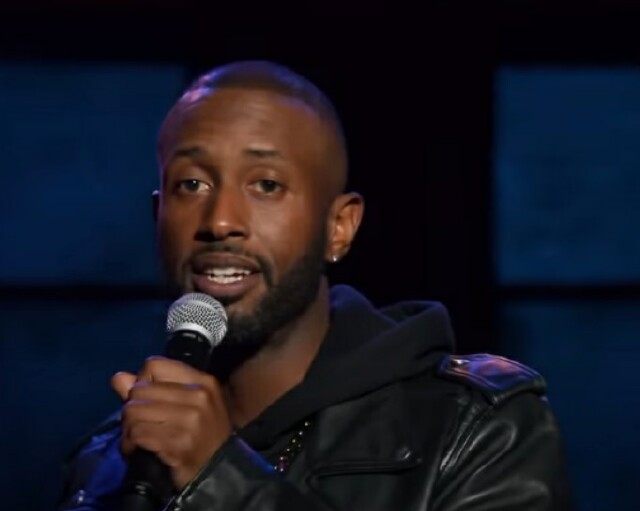 "The only difference between a good comedian and a good reporter is a necktie." These are pretty much the first words that comedian Roy Wood Jr. says in the first episode of Dark Humor, a digital docuseries from Comedy Central about Black comedy and American politics, and he's definitely not wrong. Presented on Comedy Central's YouTube channel and created via a partnership between Comedy Central and the nation's largest online racial justice organization Color of Change, Dark Humor illuminates the lives of Black people using the platform of comedy to tell their stories -- which are all of our stories, really -- through a lens most everyone understands.

The general sentiment of that first episode, titled Kinda Juggling Dynamite, feels very similar to things I've said, or have at least wanted to say in the past. That feeling of, "you took the words right out of my mouth" prevailed through the majority of the 18-minute episode, which featured comedians like James Davis, Chloe Hilliard, Jordan Temple and Rae Sanni, among many others discussing the effect of comedy as a vessel for truth and understanding, or at least displaying how the concept works by merely existing.

A clip featuring James Davis (one I've actually quoted in a related article of mine) describes how the frustration of the Black community has caused our collective reaction to evolve from informationally impactful to infrastructurally so. Like the man says, "Rioting is not ‘Plan A.' It's 'Plan C.'" (Davis is pictured at top.)

The truth is that most people don't want to be given bad news in a clinical, matter-of-fact sort of manner, which is why shows like Samantha Bee and The Daily Show have audiences in the first place. The difference between them and the regular-ass news doesn't lie in how factual the reporting is; it lies in its palatability. As comedian Sonia Denis puts it in the docuseries, "They can do satire to make fun of the president in a way that the news can't."

Think about comedians like Dave Chappelle and Chris Rock. Their careers are essentially built on the delivery of their respective truths, which, as far as being Black is concerned, are pretty similar. Over the years both have discussed everything from their marriages, to the differences in how Black wealth is viewed when compared to white wealth, to whatever terrible thing is still happening to Black people that particular year. While this can be said of many comedians regardless of their race, gender or otherwise, these two in particular have a knack for taking on the more divisive, usually race-related topics and putting them in joke sandwiches. It's the metaphorical equivalent of shoving a pill in a hot dog. You need the pill, but by itself it's gross. At least the hot dog tastes alright.

Other comedians choose a more hands-off approach when it comes to politics and similarly divisive topics. Some, like Kat Williams or Eddie Griffin (who actually appears in the series), would respond to such topics in the exact opposite way that someone like Kevin Hart would. He's notorious for having avoided these heavier topics in his past specials. "He says he don't wanna do anything too political," notes comedian Yamaneika Saunders, also in the series, who agrees, but disagrees. "He experiences these things, but he wants to just, you know, have fun, and people come out to see him and have a good time, and I understand that. I just don't wanna be that, because you're saying things out of your mouth that people are picking up with their ears and digesting."

In light of the past four years, one can imagine the nation's thirst for actual, factual information. I'm not saying that everything a comedian says is factually true, but I am saying that it's the truths behind their jokes and anecdotes that people are responding to. Black people are not the only group of marginalized people, or even the only victims of racism, systemic or otherwise, but ours is a unique experience, and each individual Black person's experience is even more unique than that. These stories deserve to be told.

Comedy is built on truth, so this dynamic makes perfect sense. I don't wonder what Fox News is going to say about politics, or the most recent police shooting. But I do wonder how the writers at SNL are going to react. I wonder what Trevor Noah's next video will say, or how Chappelle's going to respond in his next special. These people are the gatekeepers of American opinion as far as I'm concerned, at least when it comes to people of color, or people with progressive views, or people who just want peace and equality. You know, pretty much anyone not wearing a MAGA hat or flying a Confederate flag.

That said, Dark Humor intends to continue exploring the Black experience through comedy on a weekly basis, so look out for a new episode every Monday on YouTube.