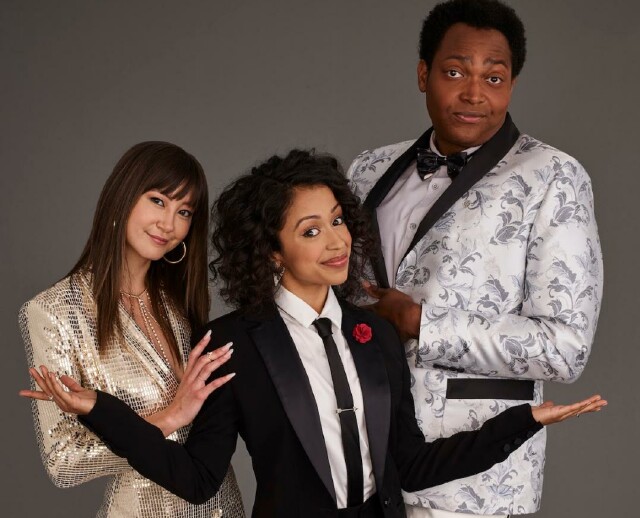 If you’re under 30 years old, then you probably know YouTuber Liza Koshy from one or both of her online channels (or her old hosting gig on MTV’s TRL, or her current one at Nickelodeon’s Double Dare,  or from way back during her Vine days, or from … well, you get it).  If you’re older than 30, though, you literally just heard about her.  Like, right now.  From this article.  The point is, Ms. Koshy segued all that stuff you never heard of into a legitimate YouTube Original last year, Liza on Demand, and guess what?  It’s dope.  It’s that Don’t Trust the B**** in Apartment 23 kind of dope.  It’s that “the over-the-top wackiness of a live-action Disney XD show meets the bright and colorful visual style of a show like black-ish” kind of dope.  Now, Liza and her two roomies are back with a well-deserved second season that just recently premiered on YouTube Premium, and I’m here to say if you haven’t spent any time with these three yet, you really should.

Created by Liza Koshy, Harry Elfont and Deborah Kaplan, and starring Liza Koshy, Kimiko Glenn and Travis Coles, Liza on Demand follows the life of one Liza Hertzler (Koshy), a 23-year-old “tasker” who rooms with her two besties, Harlow (Glenn) and Oliver (Coles), and lives to one day achieve “elite status” at her job.  (Glenn, Koshy and Coles are pictured at top, left to right.)  First off, the show’s premise is the gift that keeps on giving.  Liza’s job as a tasker allows her to be reeled into any number of ridiculous situations, either by her clients, or through something indirectly connected to her work.  Unless she loses that job, I imagine there’s no end to the conga line of new episode plots that can be rolled in through that bad boy.

Dynamically, Liza’s also the defacto child in their little group.  I mean, they’re all supposed to be the same age, but maturity-wise, Harlow and Oliver seem like the two grown-ups in the apartment.  Their respective jobs are more stable in nature than hers.  (Harlow manages his social media-famous dog, Bark Paul Gosselaar, and Oliver is a real estate agent.)  More oft than not, their function is to explain to her exactly how much she’s been wild’n in any given episode.  Yes, they’re a bit eccentric, as well, but together they don’t even come close to the volume of unrelenting extreme emotions coming from Liza.

One of the best examples of this faux parental relationship is in season one’s third episode, “Popular.”  Liza, for whatever reason, ends up high and in a high school (mainly in search of pizza boats), and inadvertently ends up landing the lead in the school’s production of “Rent.”  The thing is, Liza’s supposed to be like 23 years old, and only passed for a high school student because of her height and youthfully expressive face, so technically everything that happened wasn’t only super-weird, it was also illegal.  This absurd moment was captured perfectly by Harlow, who kept dryly calling Liza out during the episode.  His nonchalant delivery of lines like, “I feel like you’re committing a lot of crimes right now” and “Liza, you have to stop going to high school” had me almost literally rolling on the floor with laughter.

Besides bringing the funny, Koshy also uses her show as a platform to comment on social issues every now and again.  In episode two, titled “Smile,” Liza’s outside after a bad day at work and some guy eating a sandwich (played by Broad City’s John Gemberling) says, “Smile, baby.  You’re too pretty to look so mad,” which, as we all know, is something women love to hear.

Liza responds by offering up this succinct and informative response:  “Okay, look.  I don’t want to make a big deal out of it, but I don’t really appreciate you saying that.  See, I don’t want to smile, ‘cause I’m actually having a terrible day.  Which you would have no way of knowing, of course, but you’re also a total stranger.  So why should I do anything you say to begin with?   Because it would please you?  Because that’s rather presumptuous and also sexist.  I mean, when you really break it down.”

As someone who always knew telling women to smile was lame, but couldn’t always verbalize exactly why, this was a learning moment for me.  I officially get it now.  Unfortunately, it wasn’t that same kind of moment for this guy.  His response?  “F**k you, you limpy bitch!  You’re ugly anyway!”  So … not great.

These issues, while not always the show’s main focus, are still important enough for LODto make more time for them, and issues like them, as it moves forward.  The newly released second season kicks off with a hilarious episode about body positivity, aptly titled “Naked,” and is eventually followed by episodes like “Gentrification: The Musical” and “New Year’s Eve: Pt 1.”  The latter has Liza in a scene with a client who verbalizes his mistaken belief that she’s a prostitute.  She corrects him and goes to leave, at which point the client (played by Stranger Things’ Noah Schnapp) says, “C’mon!  If you’re not a sex worker than why are you in a costume?”

Liza says, “It is not a costume and I am not a sex worker!”  She continues to storm out, stops again, and says, “But I do appreciate you using the correct language because that does show sensitivity and also destigmatizes the profession.”

However anyone wants to slice it, Liza on Demandis as unique as Liza’s on-screen wardrobe, and that’s saying a lot, because for some reason she’s usually dressed like a cross between Lisa “Left Eye” Lopes and one of the paperboys from Newsies.  Sometimes she dresses very trendy, and sometimes she looks like a modern day version of Rosie the Riveter.  Either way, it all works, because no matter how literally crazy her character might seem (like “pretending to be a high school student” crazy, or “stealing a dead man’s phone from his casket” crazy), at her core she’s just an idealistic, socially conscious, open-minded workaholic who happens to be as fun to watch as a young Fresh Prince.  Her two wonderfully snarky roommates are the proverbial cherries on top of this comedy sundae.  Hopefully this one sticks around longer than some of YouTube Premium’s other originals (cough cough, Ryan Hansen,cough cough).

The second season of Liza on Demand  is currently streaming on YouTube.