Podcast: Tiffany Haddish, Daniel Radcliffe and Other Stars at the Turner Upfront 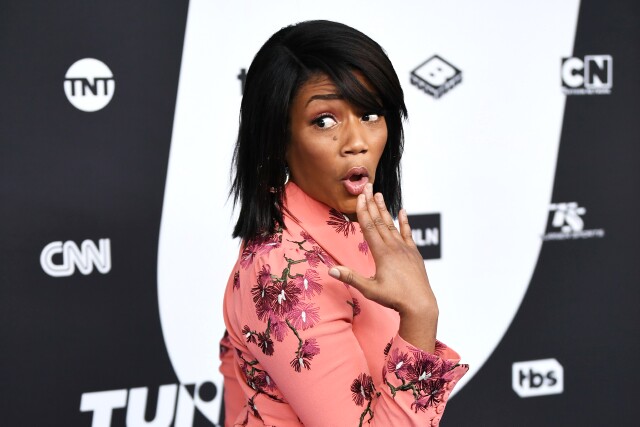 How and where do the stars and executives of Turner personally consume video?  How is the company building an engaged, loyal audience across platforms?  Does Harry Potter star Daniel Radcliffe like a good mystery or a comedy?  For Episode 17 of Insider InSites, I was on the red carpet for the 5 Jacks-rated Turner Upfront and talked with everybody from Turner Chairman/CEO John Martin and President David Levy to Tiffany Haddish (pictured above), co-star of TBS' The Last O.G.  The transcript below has been edited for clarity and length.  Listen to the complete interviews here or through our player below.  Subscribe to all of our podcast episodes on Apple podcasts, Stitcher, iHeartRadio and PodSearch.

Bobcat Goldthwait:  I stream it at home.  It's all Apple TV and stuff like that ... and I got the Turner App.  I actually have it installed in the back of my neck.  I'm a company boy.  (Goldthwait is pictured below with our Upfront/NewFront reporter Simon Applebaum.) 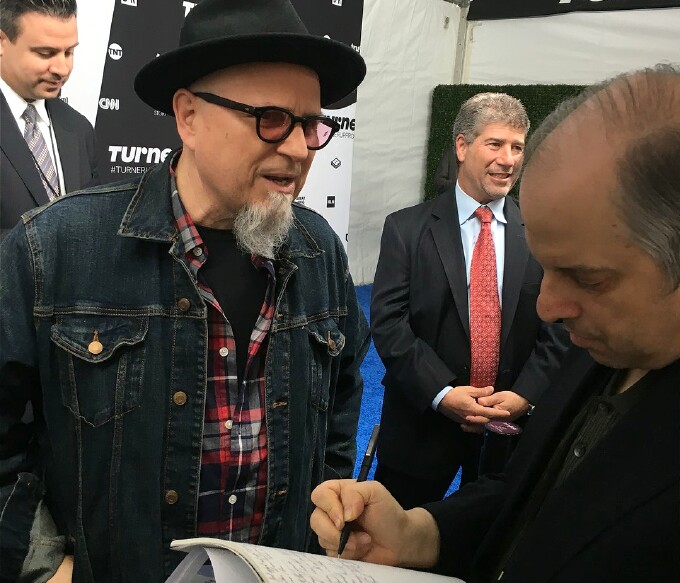 Moss:  Who would you most like to road trip with from Turner?

Goldthwait:  The Those Who Can't cast.  They're hilarious and I'd love to hang out with them.

Moss:  John Martin, a couple of easy questions:  With people using so many screens, how do you break through?

John Martin:  That's an easy question?  That's the principle question of the future of our industry ... and at the center of everything we're thinking about.  What we need to do ... is create brands and franchises that can cut through the clutter and engage with consumers in an emotional way. We're calling it "fandom," so everything we're doing now at Turner is about making fans; not casual viewers who tune out, but fans who come, spend an engaged process with us and lean in.  This is what the whole business is about right now.

Moss:  Here's your softball question: Who would you most like to road trip with?

Martin:  I'd take Anderson [Cooper] and Shaq together.

At the Upfront presentation itself, Turner execs encouraged sponsors to embrace all platforms.  Here's part of what Daniel Radcliffe, co-starring in the upcoming TBS comedy Miracle Workers, shared about one of his favorite media choices.

Moss:  Daniel, I overheard you say that you consume a lot of podcasts.  Any favorites?

Daniel Radcliffe:  Anything Dan Cohen does, or Mike Duncan.  I like all the History guys. There's How I Built This, On the Media, Start Making Sense, The Nation's podcast, CaseFile: True Crime -- a lot of true crime ones.

Moss:  Donna, who would you most love to road trip with?

Donna Speciale:  I am a huge, huge fan of The Impractical Jokers.  They're all best friends and they're fun to be around.

Moss:  On the serious side, with all that competition for audience attention, what does it take to break through ... and to benefit advertisers?

Speciale:  The content has to be compelling, but I also think the advertiser has to think a little bit more about their messaging and the storytelling. We've also been trying to reduce the clutter on the linear screen to make that experience that much better.

Moss:  David Levy, there are a lot of celebs here, and a lot of them are fans of Samantha Bee!

David Levy:  When we brought Samantha Bee to Turner three years ago no one knew what was going to happen in this country and how powerful her message would be right now, and what influence she's having.

Moss:  What aresome of the other shows you're excited about?

Levy:  Well, I love all my children fromDetour and Wrecked, and Conan [O'Brien], and Claws, Animal Kingdom ... and 80 percent of our shows have been renewed.  We're focusing on fandom because fans tell other fans about great shows and that's what makes them so successful -- not just on TV, but across platforms.

Moss:  Who would you most like to road trip with?

Speaking of fans, Enrique Murciano of Tell Me Your Secrets shared how social media has kept him connected with his fans since 2002, while former SNLwriter and creator of Miracle Workers admitted his lack of social media presence!

Finally, documentary filmmaker Michael Moore lived up to his reputation as a consumer evangelist with a great point about social media, followed by the witty correspondents and executive producer of TBS' Full Frontal with Samantha Bee.

Moss:  Michael Moore, what are you a fan of and how do you consume it?

Michael Moore:  I have to stream and pay extra if I want to see The Handmaid's Tale, The Good Fight or The Looming Tower.  I feel bad that the public has to pay extra and extra and extra to see this stuff.  Where's the breaking point for the average working person?

Moss:  So, what do you think the future of media is?

Moore:  I think we're in the middle of an immense transition, and the public will decide what it wants.  Years ago people were saying, "Everybody will be reading books digitally."  Ten years later just 25 percent of the books sold were sold digitally ... that's the number of people that wanted [digital] ... and books didn't go away.  People are also still going the movie theater no matter what way we are streaming, because they want to be with other people.  They want the collective experience of a movie on a huge screen with a couple of hundred people.

Moss:  That begs the question about social media as we try to create an artificial community in those channels.

Moore:  The greatest thing about social media is that it's been the great equalizer, letting people communicate with other people.  For a democracy, that's a good thing.  Sadly, people have also figured out ways to manipulate it to try to destroy the democracy.  So there lies the great fight that's ahead of us.

I bantered withFull Frontal with Samantha Beecorrespondents Allana Harkin and Amy Hoggart and executive producer Miles Khan about how they consume media and their preference for Twitter or Instagram.

Allana Harkin:  I would say Twitter if I'm in a bad mood and Instagram if I'm in a really good mood.

Miles Kahn:  I got off of Instagram just so I could never be in a good mood.

Moss:  Who would you most like to road trip with?

Harkin:  100 percent Anthony Bourdain.  But he can't smoke in the car.

Kahn:  I want to go with Rick from Rick and Morty because then we can go on adventures in another dimension.

Editor's note:  Read our full coverage from all the Upfronts and NewFronts on MediaVillage -- and see how they fared via our Jacks rating system.