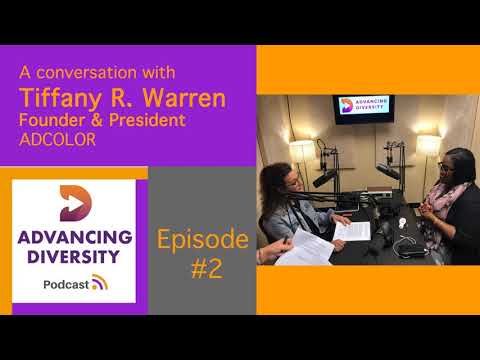 There's plenty of evidence that weaving diversity and inclusion into the fabric of your company is good for business. And we have lots of it. In this Advancing Diversity Hall of Honors podcast interview series, the 2020 inductees (see below) discuss the many ways their organizations champion and embed diversity, equality, and inclusion, as well as examine the benefits to their company, constituents, and community.

In celebration of those accomplishments, MediaVillage will host its annual Advancing Diversity Hall of Honors in January at CES. The ceremony is an opportunity for the advertising and media community to join hands in solidarity and support for diversity and inclusion.

In this installment of the podcast series, MediaVillage's E.B. Moss, head of content strategy, and Ginger Conlon, editor-in-chief, talk with ADCOLOR's Tiffany R. Warren. Before founding ADCOLOR and joining Omnicom, Warren led the multicultural and diversity programs at the 4As and then Arnold Worldwide. Her many honors include the AAAF Pioneer in Diversity Award for Omnicom Group, MAIP/Digitas Multicultural Scholarship Award, and Gladys Prior for Career Teaching Excellence. She discusses the genesis and future of ADCOLOR, how its mission and her work at Omnicom dovetail, and the milestones both have achieved in advancing diversity.

This article is a topline of the conversation. Listen to the podcast to hear why Warren keeps awards "in the basement" and how she helps raise up new ADCOLOR participants, as well as her advice on how to leverage data around diversity to inspire creatives but balance being driven by KPIs. Warren even describes how she lost her "imposter complex" and found a new family.

Please subscribe to the Advancing Diversity Podcast on Apple Podcasts, Stitcher or watch on YouTube or listen to the entire podcast here, and share widely to help promote more awareness of diversity and inclusion issues and initiatives.

Ginger Conlon: The lucky 13th annual ADCOLOR recently wrapped, give us some of the highlights?

Tiffany R. Warren: This year's theme, Take a Stand, really hit home. Right now, in society, we're being called to take a stand and to be on the right side of things. The constituency that supports ADCOLOR within their companies and agencies strongly believes that taking a stand is what we all have to do — not rely on leaders or government; instead, each of us personally can take a stand … at our companies [and] in our personal lives.

The biggest group [of attendees] is African American, and the second biggest group is Caucasian. And that's exciting because we know the group is full of allies and full of people who can make decisions to change culture, including CMOs and CEOs. We actually had a panel where we spoke to [Facebook CMO] Antonio Lucio and [Verizon CMO and 2019 Hall of Honors inductee] Diego Scotti, as well as Carla Hassan, [global chief brand officer] from Citi.

But one of my favorite moments was the conversation with M. Night Shyamalan, the director…. It was unique to have him talk about his immigrant story.

Moss: How did you get inspired to even start ADCOLOR?

Warren: The idea came to me when I was in Boston, before I got my huge break working for the 4As as their manager of diversity programs. I was all of 23 when I approached my friends and said I wanted to start this thing called The Door Group … literally, because I wanted us to open doors for other people. And then engagements happened, marriages happened, and I moved to New York. So, The Door Group didn't open for a little while … but, I still had a mission in mind. As I kept rising up, I wanted to reach back. That turned into the mission of ADCOLOR.

Moss: And what's next for ADCOLOR?

Warren: The sky's the limit. It's really scary. It's like containing a big thing of energy in a bottle that's too small for it. 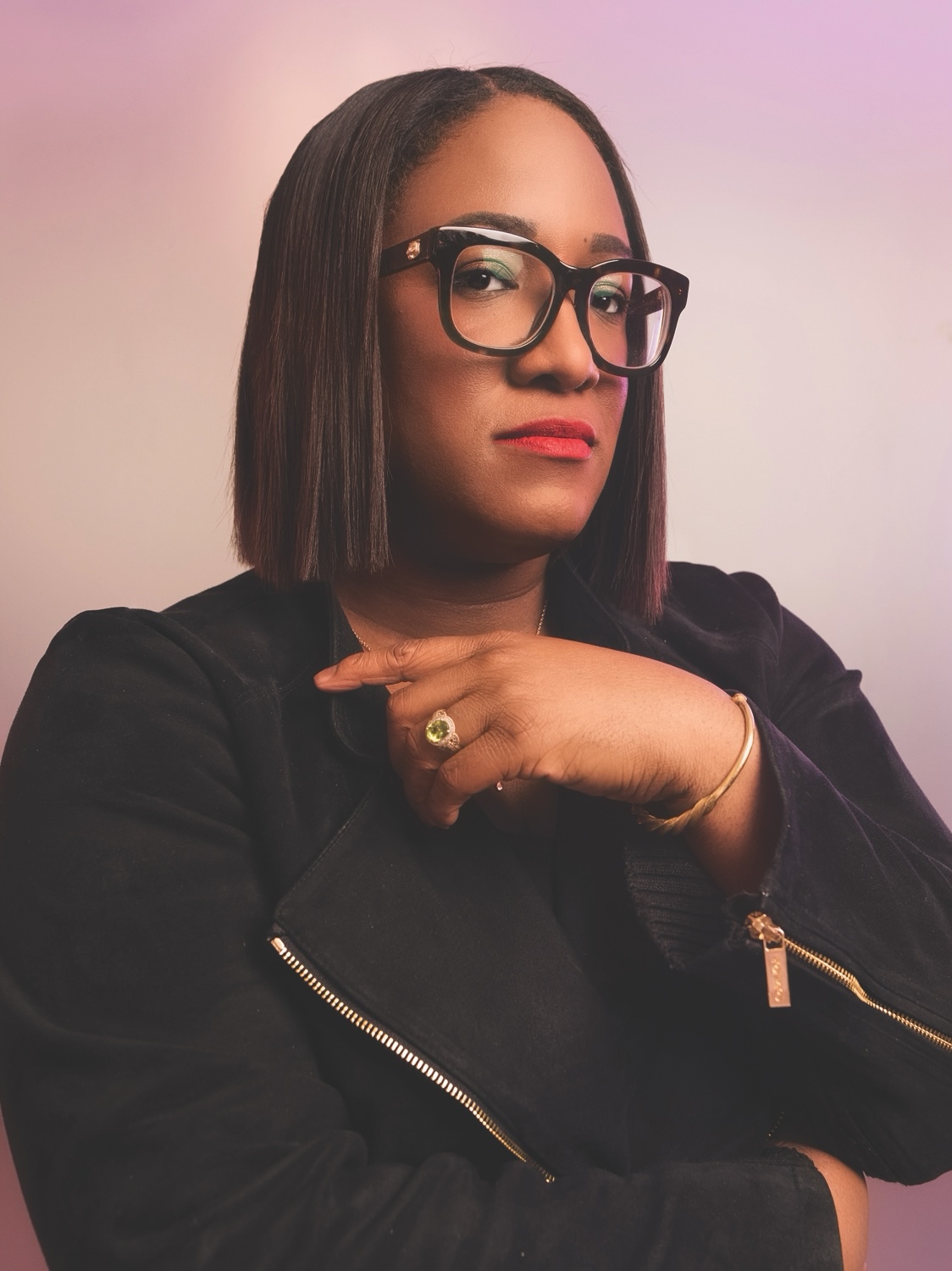 The thing that I'm patient about, [though], is organic growth and not scaling up too much where it feels like a convention versus what it feels like now, which is a family reunion.

I think ADCOLOR was super successful this year because people wanted the biggest warm hug they could find, and we gave it to them…. It was just taking out the classic networking model and inserting a model about connections. And I think anyone can take that … idea and apply it to their organizations.

Warren: How I manage both is different every day, and it's never easy. But it's rewarding because my approach is always about building networks … in the sense that [you're] empowering people to be a part of the process. I learned that if you remove the champion, sometimes initiatives fail because they're focused on that one person to manage everything. So, everything I've done, I've always done it as a committee … making sure everyone feels like they're part of the process. And we've had a lot of success with that at Omnicom.

A couple of years ago we launched the Omnicom People Engagement Network…. We had Omniwomen, which was managed by Janet Riccio, who recently passed. And we launched OPEN Pride, which we thought was a really good first step because it cuts across demographics and, with chapters around the world, everyone can be a part of it. We were the Platinum sponsor for New York City Pride.

Where I've seen [the necessary communication for these programs] work really well is when the senior leadership can talk about their struggles…. If you create a safe space where even the leadership can be vulnerable, it allows the employees to be vulnerable, as well. And then you have this masterclass in speaking to each other from [your] heart versus just from your mind and from your mouth.

Conlon: What other milestones have you hit since joining Omnicom?

Warren: The biggest one is the growth of the discipline and the practice of D&I, not just at the Omnicom level but down through the networks. When I started, it was just me, the chief diversity officer, to move this mountain and figure out how to do it for 75,000 people globally; there are different rules here and nobody is participating over there.

One key understanding for me was that I'm not in the networks every day, so I don't know the pain points of the individual agencies. Creating roles like the chief diversity officer for TBWA and head of diversity for Omnicom Media Group now allows the work that we do at the Omnicom level to be transferred in a way that is appropriate but still gives each network a space to individualize what they need.

That was 10 years ago. Now the networks are mature enough where they're on their second round of hiring D&I professionals. Some of our professionals have gone out and are now in the industry doing great work. So, the biggest milestones may be KPIs — percentage growth of senior-level people of color at the manager and higher level — but I always say that KPI for me stands for "Keep People Interested." Because when you throw KPI and ROI and metrics in the same bowl, when you're talking about human beings, it's a little messy for me. It makes the human beings feel like they're part of a group versus a contributor to the success of the company.

I'm proud of the diversity on our board; our director is African American, the gender mix is more women than men. We really walk the walk and I think partly from creating the role of chief diversity officer.

[Another milestone is] being a leader externally; supporting organizations such as Advancing Diversity Honors or AAF or the 4As. We put our money into organizations that literally train the next generation of diversity and inclusion professionals … like MAIP. They are doing the hard work of finding these young people, training them, putting them in our industries. Many amazing alumni who are changing the way our industry operates came from these programs…. So, top priority is to support those initiatives.

Moss: How do you see advocacy versus activism?

We've been doing that for a long time, so when I see an ally who is kicking butt and standing in front of moving trains for people that don't look like them, I cry because I know what it takes to do that.